I Was a GI in Afghanistan: Here’s Why I Can’t Forget the Women

I went digging into my box of Army memories in my garage — a box I tend to keep shut tight. I grabbed a little toy ring, I had a cry, and I went to bed.

I deployed to Afghanistan in 2009. While I was there, in Logar, I worked for our unit’s Civil Affairs office. Specifically, my job was to track spending for a program that provided services that were meant to improve the quality of life for Afghans, and all services were to be performed by Afghan citizens. It was a lot of staring at spreadsheets and getting approval from commanders, but it felt good to be doing a job that actively worked to make a positive difference in the lives of Afghans. I frequently inspected job sites, met Afghans who were working towards the same goals, and sometimes provided humanitarian aid.

It was through the lens of civil improvement that I got to see Afghanistan, and the people I met were passionate by nature about making changes in their country.

So, all these years later, when I started seeing the dreaded “public opinion” creeping into our news coverage, I stopped short. Yes, more people were noticing what was happening, but their posts were disheartening and full of uninformed opinions about who Afghans are and what they’re like.

Enter Najeeba. She was the director of Women’s Affairs for her province in Afghanistan. She worked to create opportunities for women and girls. Jobs, education, advocacy for medical care — all of it. And she wanted to make it happen that day, that moment. I went along on a mission to talk to Najeeba about her work. After the meeting, I asked her (through our interpreter) about the woman who had been taking care of a baby outside. The baby was Najeeba’s daughter, and she had the other woman caring for her while we had the meeting. I asked if I could see her baby, and she let me hold her. We snapped some pictures and spent some more time talking about possibilities for advancing women in her area. 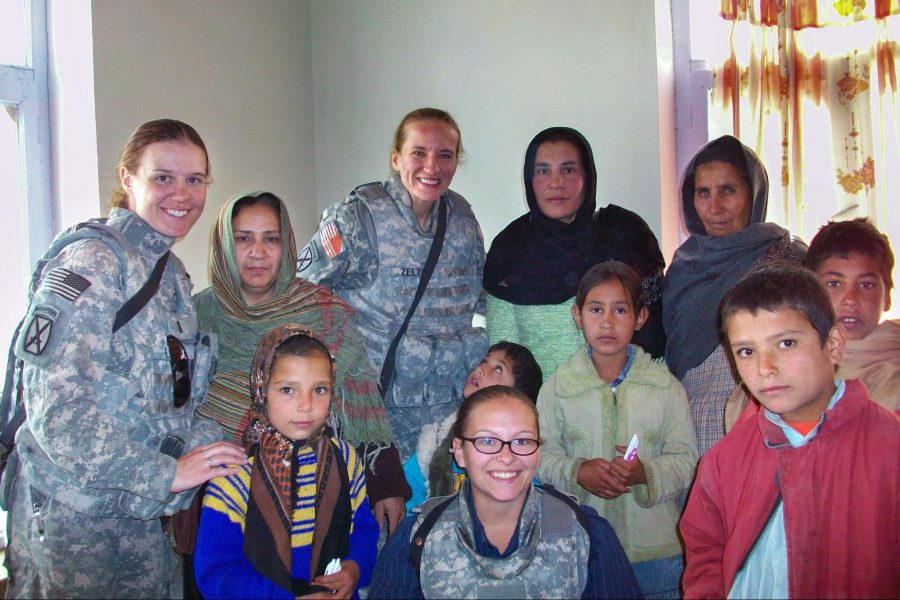 After visiting with the baby, Najeeba took us to a building where women were having a sewing class. They were learning to make garments, which they planned to sell to fund more women’s projects. We went into a large, open room that was set up as a small bazaar. There were Afghans selling all kinds of items — jewelry, rugs, textiles;  it was beautiful. Najeeba went to one of the vendors and pulled out a blue burqa. She gave it to me, telling me that I should have one so that I could understand what my Afghan sisters had to tolerate.

Even before the United States left, Afghan women suffered great inequalities and suppression. One in three girls is married before her 18th birthday. Nearly 80 percent of girls under 15 cannot read or write. The substandard health care for women results in deaths from preventable diseases and rampant anemia, according to UNICEF.

The women in Afghanistan aren’t a different species from women in the West. Yes, they wear modesty garments, but so do women of other cultures. I’ve known women in the United States who prefer to wear a hijab so they don’t have to style their hair. It turns out that women have clothing and beauty standards everywhere.

The next time I met with Najeeba, I gave her a copy of the picture of her, me, and her daughter. A couple of months later we met again, and when I saw her, her husband was carrying a piece of wood. When we sat down for our meeting, Najeeba took it from him and handed it to me. She had taken the picture I gave her and had it made into a wood etching focusing on me and the baby — an absolutely beautiful and thoughtful gift.

During my time in Afghanistan, I met a lot of Afghans, some bidding for jobs, some selling things, some at humanitarian missions. I loved talking to the women and girls, though that was harder to do in most cases since primarily men conduct business. My favorite mission was a huge women’s shura — women from the province were gathered together, and we met with them in smaller groups throughout the day to talk about their daily lives, their challenges, and their needs. All of the US staff in these shuras were women, as were the interpreters, which meant we got to see actual faces. We talked about health care and the difficulties women were having accessing it for themselves and their children. We talked about employment, about food, about their daily lives. They joked about their husbands. 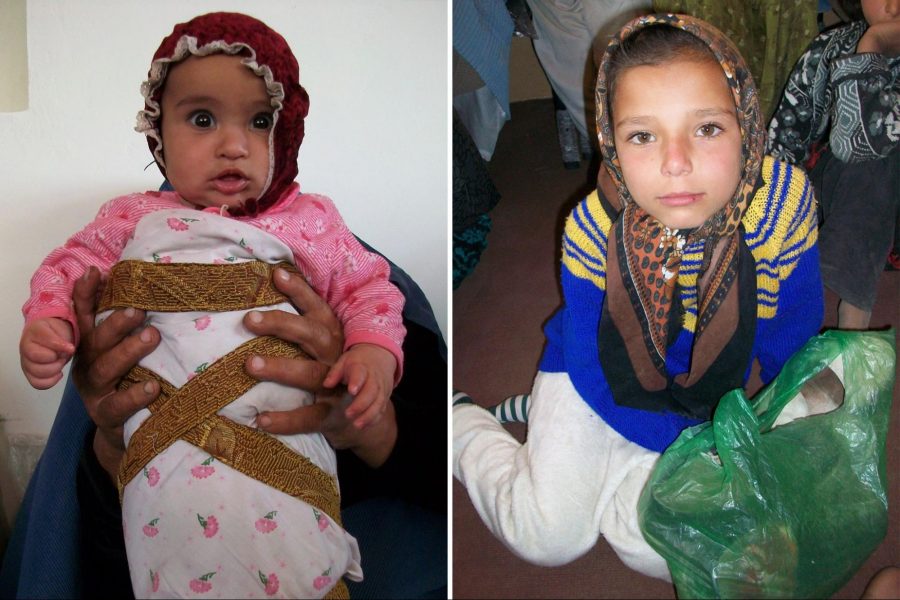 Afghan children waiting while their mothers conduct business in 2009 — something they can no longer do under Taliban rule. Photo credit: Courtesy of MaryAnne Luther

One woman had a small baby and a little boy. We were talking about her infant, and she jokingly told me to take the baby (the same joke that tired moms everywhere make). Her little boy burst into tears, crying that we were going to take his little sister. We all promised that we really weren’t, but it was a family interaction I could have had anywhere. Families are families, regardless of where they are in the world.

The shura took place in a town surrounded by mountains south of Kabul. It was a beautiful autumn day, sunny but not hot, which is a blessing when you’re wearing body armor. At one point, I was standing outside when a girl came out of the building and walked up to me. She wasn’t a little kid, but I don’t think she was a teen, either. I asked her name, and she shyly looked away. Another little girl walked by, and the first girl took her by the arm and they started whispering in Dari. The second girl looked at me, and, in English, asked what my name was. I told her, and then asked hers and the other girl’s. More whispering. The first little girl softly said her name, but the second girl took my hand and in pen wrote “Nabeeba” on my palm. I can only imagine how foreign I looked to them, in my pants, body armor, and helmet. We talked another minute or two (until she used up all the English she had learned), and then she took off the ring that she was wearing and gave it to me. I scrambled for a minute to find something to give to her, but she laughed, closed my hand, and walked away. It’s just a little toy ring, something that maybe you could get from a bubblegum machine, but it’s one of the most precious things I own. 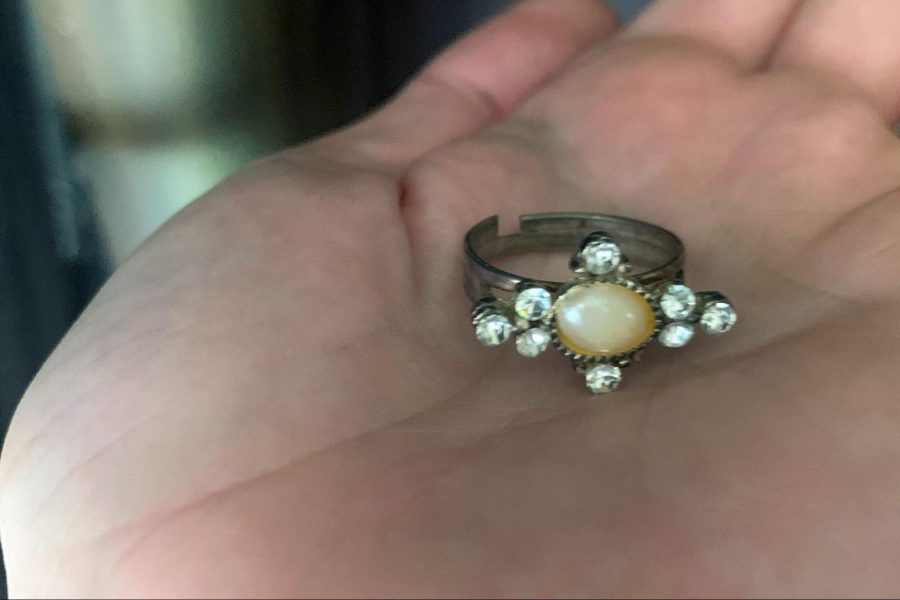 A toy ring given to Luther by an Afghan girl in 2009. Photo credit: Courtesy of MaryAnne Luther

I don’t know what happened to Najeeba. I don’t know if she and her husband continued working in their province or if something happened to them. Even while I was there, Najeeba was threatened numerous times. Where they lived is now controlled by the Taliban. I don’t know what her life is like.  Her baby is now 11 or 12; I’m sure with Najeeba as her mother she has been educated. But maybe Najeeba has died; after all, her position and personality put her at risk.

I don’t know what happened to Nabeeba or her friend, either. They’re both grown women now; are they married? Did they have a choice in that marriage? They were educated; did their families evacuate them? I don’t know, and there’s no way for me to find out. But with the Taliban having taken over their country, what can their lives have become? All of these questions weigh heavy in my heart.

As news stories have been coming in, I’ve been thinking about all the women and girls I interacted with. There were so many more than I’ve talked about. I’ve been thinking about the Afghans who worked directly with the US military — are they safe? They took a huge risk in joining us to try to help their country. I’ve seen so many people post their opinions about Afghanistan, talking about Afghans as cowards, as uncivilized, as something so foreign that we couldn’t even recognize them as people. Their opinions couldn’t be further from the truth. Afghans are proud of their history, their culture, and their families. They work hard, and they value their communities and their relationships. They dream of social mobility and of peace.

That burqa Najeeba gave me? It’s awful. It’s a polyester tent with mesh covering the eye area to allow the woman to see out. It’s hot, difficult to breathe, and impossible to do any actual work in. I didn’t last 5 minutes wearing it. I still own it though, to remember what my Afghan sisters must tolerate.