Zhanaozen, Kazakhstan, has been gripped by unrest since January 2, 2022, sparked by a rise in fuel prices. Photo credit: © Orda.Kz/TASS via ZUMA Press
International

The protests began on the second day of the new year in Zhanaozen, a sun-parched, heavily polluted town in the steppe of southwestern Kazakhstan that feeds off a depleting oil field in the nearby Caspian Sea and a Soviet-era uranium mine.

Zhanaozen is where police mowed down a crowd of striking oil workers in 2011, killing at least 14 people and wounding hundreds, and where ethnic clashes resulted in as many as 200 deaths in 1989 during the twilight of the USSR.

“It’s no coincidence that [the new protests] started in Zhanaozen, where authorities forced a lid on discontent 10 years ago,” said Ivar Dale, a senior policy adviser with the human rights watchdog Norwegian Helsinki Committee, who spent several years in Kazakhstan and visited the town.

Like a steppe wildfire, the rallies spread to urban centers of the Central Asian nation of 19 million whose population is an ethnic mix: Two-thirds are Kazakhs, one-fifth are Russian, and the rest are Uzbeks, Uighurs, Ukrainians, and Koreans spread thin across a country four times the size of Texas.

1/2
"Today we have witnessed a repetition of the 2011 tragedy in Zhanaozen. 11 years ago, there was a shooting of peaceful workers who demanded higher wages. Then, the authorities also declared a state of emergency and turned off the Internet.#Zhanaozen2022#KazakhstanProtest https://t.co/u65RSRn9kV pic.twitter.com/ttN8rnrnMV

The protesters were mostly young, blue-collar ethnic Kazakhs. They had no apparent leaders, organization, or structured agenda and simply demanded higher salaries and the dissolution of President Kassym-Jomart Tokayev’s government.

Nazarbayev’s three daughters, sons-in-law, and other kin — many of whom changed their last names to distance themselves from him — had kept control of key industries and security agencies even after he stepped down as president in 2019.

Nazarbayev’s offspring and those of fellow Kazakh elites drowned in excess while the once-booming economy stagnated amid galloping inflation and rising unemployment hit the younger post-Soviet generation hard.

Aisultan Nazarbayev, one of Elbasy’s nine grandchildren, died of cardiac arrest in 2020 at age 29 after an unsuccessful soccer career, years of drug abuse, and a string of Facebook posts in which he proclaimed himself “a prophet who would unite Muslims and Christians.” 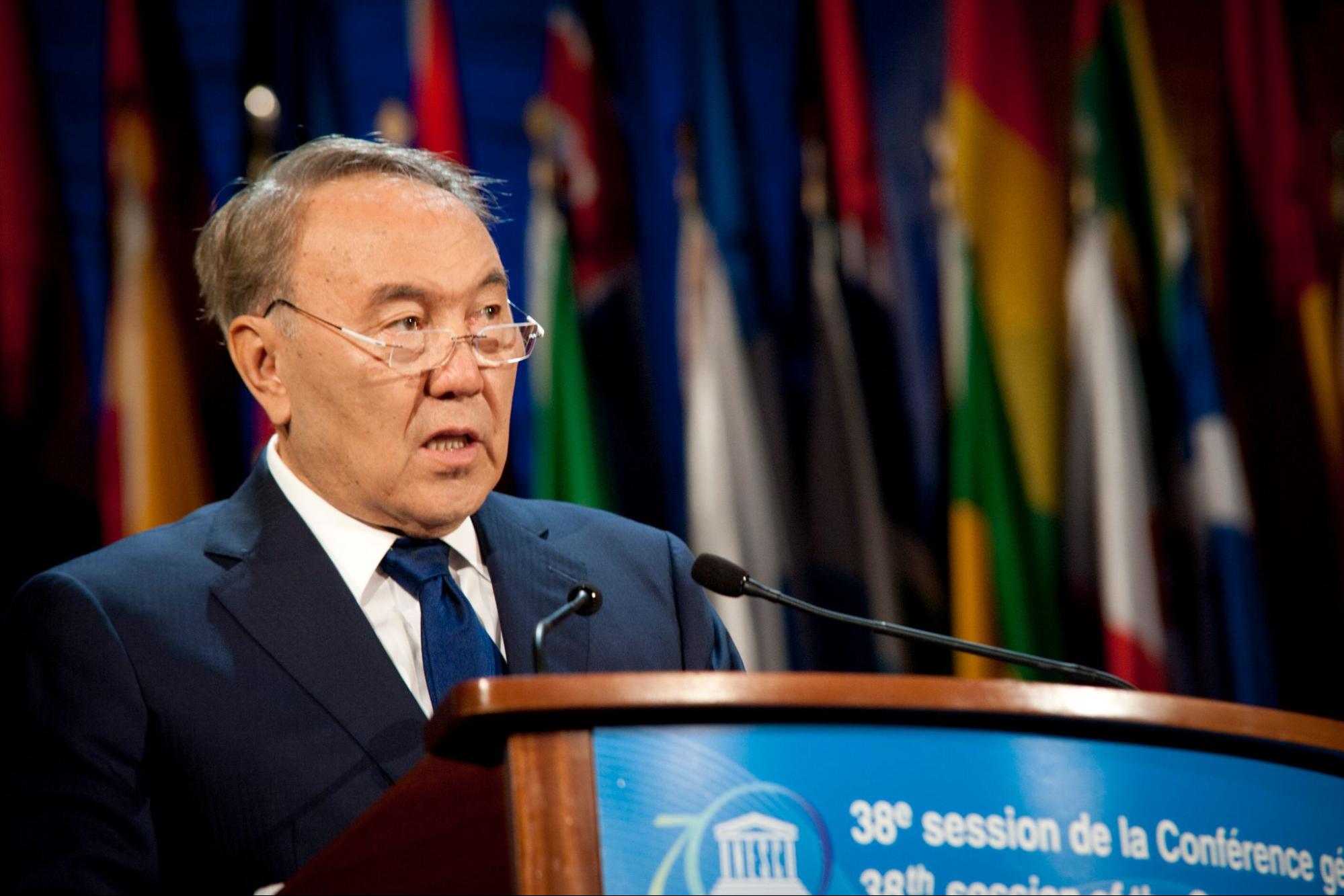 The rallies went on even after Tokayev tried to appease the protesters by lowering fuel prices, dissolving the government, and replacing Nazarbayev as Security Council head.

On January 3 and 4, the rioters burned down city halls, clashed with police — decapitating at least two officers — and toppled a lifesize bronze statue of Nazarbayev.

The largest and most violent protests took place in Almaty, the former capital that slips down the Tian Shan mountains into apple orchards that gave Kazakhstan’s largest city its name — “Father of Apples.”

To observers and media, everything looked like a chaotic yet genuine riot in a typical post-Soviet autocracy.

Yet, some Kazakhs doubted the protests’ origin and purpose.

“This is nothing but a provocation organized to make Tokayev the real president,” a well-connected businessman in Almaty told me on January 4. Since then, authorities have shut down phone services and web access.

Some media reports and social media posts do point to several peculiarities.

Even though the protesters wanted Nazarbayev and the government sacked, they never mentioned Tokayev. Protesters seizing arms from police stations were able to post videos of themselves online despite the communication breakdown.

Taciturn men showed up at rallies with heaps of firearms in their car trunks — and immediately whizzed away. Police and military did next to nothing in several cities, including Almaty, for two days.

Russians to the Rescue

By January 5, Tokayev called for outside help. He turned to the Collective Security Treaty Organization (CSTO), a military bloc that includes Russia and five other ex-Soviet nations and has for years been seen as a paper tiger.

Even though Moscow predictably dominates it, the Kremlin chose not to say anything that might enrage the West. The CSTO said yes to Tokayev through Armenian President Nikol Pashinyan, who came to power after street protests and was once seen as a pro-Western reformer until being forced back to Moscow’s orbit.

And the Kremlin deployed the cream of its military crop — the 45th Guards Special Purpose brigade that had taken part in the two Chechen wars, the 2008 Russian-Georgian conflict and the 2014 annexation of Crimea, and that helped Bashar Assad win back most of Syria.

Other contingents included a handful of Armenians, Belarusians, Tajiks, and Kyrgyz.

Even before their arrival, though, Kazakh law enforcement miraculously reappeared late on January 5 to methodically surround and shoot down the protesters who were already being called “attackers” and “terrorists.”

“Dozens of attackers were liquidated and are being identified,” police spokeswoman Saltanat Avirbek said the next morning. She later said that 26 “armed terrorists” and 18 police officers were killed, and more than 4,200 people were arrested.

One of the arrested was alleged mobster Arman Jumageldiyev, known as “Wild Arman,” the right-hand man of Kayrat Satybaldy, Nazarbayev’s nephew known for promoting an austere and militant version of Islam.

A Russian expert claimed that it was these nephews of Nazarbayev who were behind the protests.

“It is difficult to assess Tokayev’s role in the very beginning of the protests, but one can say for sure by now that he utilized them maximally,” Aleksey Kushch, a Ukraine-based analyst, told me.

And the Collective Security Treaty Organization troops seem to have played a minimal role in the crackdown.

“Tokayev needs the CSTO forces to finally legitimize himself as the commander-in-chief — as military, police, and security chiefs got a clear signal about where the wind blows and whose side they should be on,” Kushch said.

Of course, there is a price Tokayev has to pay.

Pro-Kremlin figures were ecstatic about a chance to restore Moscow’s clout in Central Asia’s economic powerhouse, whose porous border with Russia stretches for 7,644 kilometers (4,750 miles).

“Of course, we need to help. Definitely need to help,” tweeted Margarita Simonyan, head of the Kremlin-funded television network RT, formerly known as Russia Today. “But there must be certain conditions.”

She finger-counted them: Kazakhstan has to recognize Russia’s annexation of Crimea, return to the Cyrillic script instead of the Latin alphabet, make Russian the second official language, “Leave Russian-language schools alone,” and close down Western-funded NGOs.

But for now, Tokayev seems to be preoccupied with purging his own officials.

“It is of utmost importance to understand why the government ‘snoozed’ the underground training of terrorist attacks by militant sleeping cells,” the bespectacled, gray-haired leader said in a national address on January 7. “Almaty alone was attacked by 20,000 bandits. Their actions showed a clear action plan of attacks.”