Latif Mansur, Shahabuddin Delawar, and Suhail Shaheen (R-L) of the Taliban’s political office (banned in Russia) are seen ahead of a press conference at the Radisson Hotel Moscow, Russia, on July 9, 2021. Photo credit: © Sergei Savostyanov/TASS via ZUMA Press
International

Can Putin Benefit From Biden’s Withdrawal From Afghanistan?

Russia’s top diplomat could not find a more attentive audience for his spiel about the hastiness of Washington’s withdrawal from Afghanistan.

“Everyone understands that the mission failed,” Foreign Minister Sergei Lavrov told a conference in Tashkent, the capital of ex-Soviet Uzbekistan, which lies some 310 miles north of the Afghan border.

The participants in the July 16 conference included embattled Afghan President Ashraf Ghani, whose Kabul palace would be shelled by the Taliban three days later, as well as top diplomats from Central Asia, an arid, resource-rich region of 72 million ruled by secular, nominally Muslim autocrats adamantly opposed to Islam in politics.

The pullout and the Taliban’s rapid advance may trigger a spillover of refugees, radicalism, and violence into Central Asia, Lavrov said, reiterating Moscow’s earlier warnings.

Three of Central Asia’s five nations border northern Afghanistan, where the Taliban wrestled control of most of the border crossings this year.

“There are real risks of instability spilling over into neighboring nations,” Lavrov blustered.

Tens of thousands of Soviet servicemen, mostly teenage conscripts dehydrated by the heat and diarrhea, went through these crossings in 1979 to fight for Afghanistan’s pro-Soviet government that ruled a largely secular nation where women sported mini-skirts and studied in London or Moscow.

The Soviets, whom Afghans still call “shuravi,” invested in infrastructure and education, fought US-backed mujahideen, including a young Osama bin Laden, lost some 15,000 people, and withdrew a decade later.

After the fall of communism in Moscow and Kabul, thousands of Afghan refugees rushed from al-Qaeda’s cradle to newly independent Central Asia, whose ex-Communist leaders promptly relocated them to other countries. Their fears were fueled in part by their own crackdown on Islamists, alleged or real.

Thousands of Central Asian radicals, meanwhile, flocked to Afghanistan in the late 1990s to stage incursions into Uzbekistan and Kyrgyzstan, fight the US-led coalition, and pledge allegiance to the Islamic State. 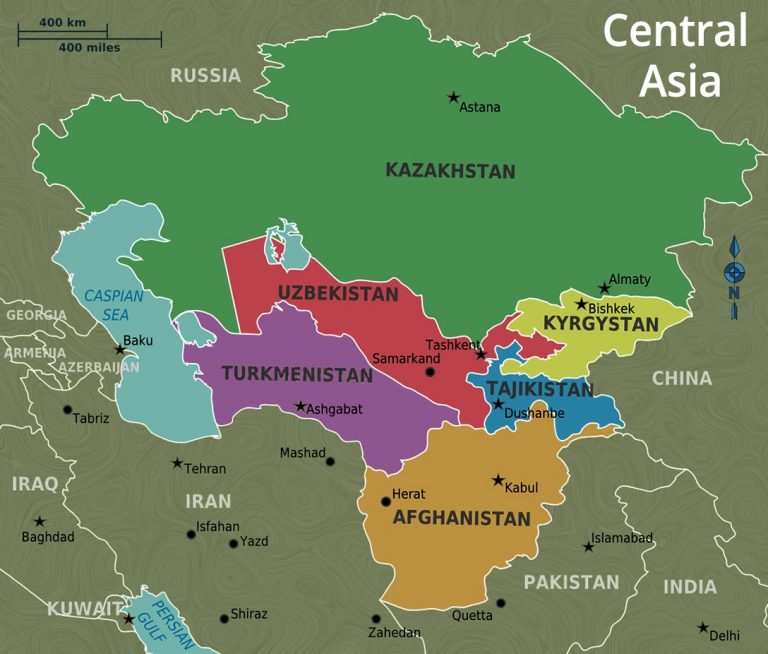 The Taliban’s resurgence lets the Kremlin try to boost its clout in Central Asia.

“The fear of the Taliban is a very helpful thing for Russia. Central Asia’s authoritarian regimes that are used to [living] under external protection — Russian, American, Iranian — doubt the safety of their borders if the Taliban decide to cross in,” Nikolay Mitrokhin, a researcher at Germany’s Bremen University, told WhoWhatWhy.

Moscow won’t miss an opportunity to expand its existing bases in impoverished Kyrgyzstan and Tajikistan, client states that supply millions of labor migrants to Russia.

It may also get more military toeholds to limit the leeway of the region’s autocrats who try to sway from Moscow’s political orbit by welcoming Chinese investments.

“Yes, they will have to pay by sacrificing part of their independence and kick the Americans out, but this is not the first time,” Mitrokhin said.

In 2002, Uzbekistan became the first ex-Soviet nation to host a US military base, but expelled it three years later after Washington’s criticism of its crackdown on a popular uprising.

Kyrgyzstan also kicked out its US airbase in 2014 after Moscow offered hefty “loans” and membership in a “free trade” bloc. 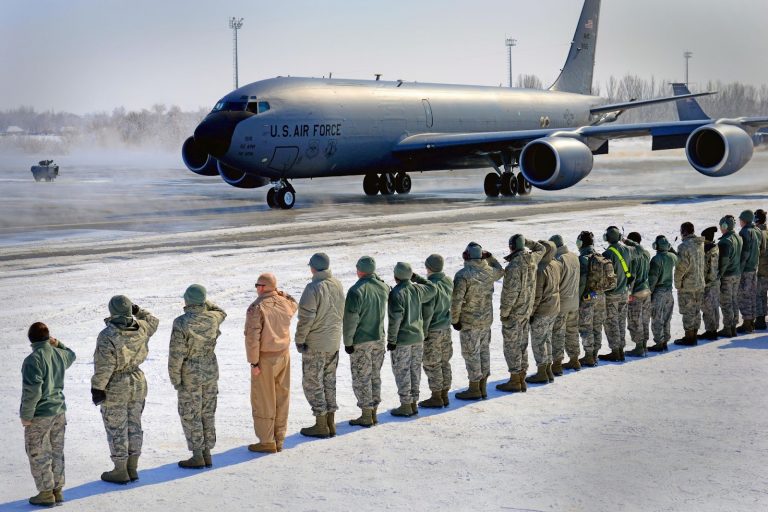 The US Air Force closed down the airbase called Transit Center at Manas in Kyrgyzstan in February 2014. Members of the 376th Air Expeditionary Wing salute a KC-135 Stratotanker after the final refueling mission over Afghanistan from the Transit Center. Photo credit: US Air Force

In recent weeks, hundreds of Afghan refugees and defeated pro-government soldiers started pouring into Tajikistan and Uzbekistan — and were shipped back to Kabul on chartered planes.

Tajikistan, whose Afghan border stretches almost 870 miles across the Pamir Mountains, alerted 100,000 soldiers, 130,000 reservists — and the Russian servicemen stationed there.

Nothing like that happened even a quarter-century ago when the then-fledgling Tajik autocrat Emomali Rakhmon made a truce with his Islamist opponents who had found refuge in Afghanistan during a five-years-long civil war.

Neighboring Turkmenistan has never been at odds with the Taliban, and throngs of mujahideen frequented the resource-rich hermit autocracy to buy fuel and have fun outside their puritan realm.

However, after the Taliban seized a border checkpoint in the southern Mary region and reportedly killed 18 servicemen in early July, Ashgabat amassed heavy artillery along the poorly-protected border that stretches 500 miles across the desert.

And Uzbekistan has reportedly erected dozens of tents for future refugees in the sun-parched desert near the Soviet-era Friendship Bridge that remains a major transport hub. 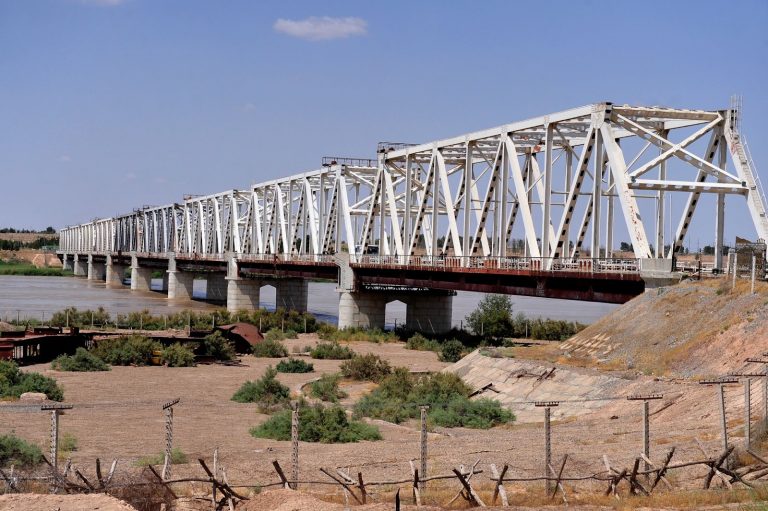 The “Friendship Bridge” runs across the Amu Darya River between Uzbekistan and Afghanistan. Photo credit: ResoluteSupportMedia / Flickr (CC BY 2.0)

Even though the Kremlin bans the Taliban as a “terrorist organization,” it has welcomed their delegations in the Foreign Ministry’s Stalinist-era skyscraper in Moscow since 2016.

The Taliban “confirmed their interest in achieving a sustainable peace,” the Ministry said after the latest meeting on July 9.

“It makes no sense to say that the Taliban poses a threat to Central Asia,” Pavel Luzin, a Russian analyst who extensively studied Washington’s policies in Afghanistan, told WhoWhatWhy.

The past two decades changed the Taliban and their homeland, he said. Afghanistan’s population grew from 25 to 38 million, a quarter of it is now urban, and the tribal Pashtun society that spawned the movement is cracking at the seams.

“These days, the movement’s agenda is about extending its support base not just among the Pashtun, but also among Afghanistan’s other ethnicities — Uzbeks, Tajiks, Hazaras,” Luzin said.

And even though Moscow decries the threat of thousands of Islamic State militants who found refuge in Afghanistan’s north and allegedly plan to invade Central Asia, it is the Taliban, not Moscow, who are most likely to put an end to them, another pundit insists.

“It is the Taliban who are mostly vexed with them and who will get rid of them, destroy them, or throw them somewhere,” Alexey Malashenko, a Moscow-based expert on the Middle East, told WhoWhatWhy.