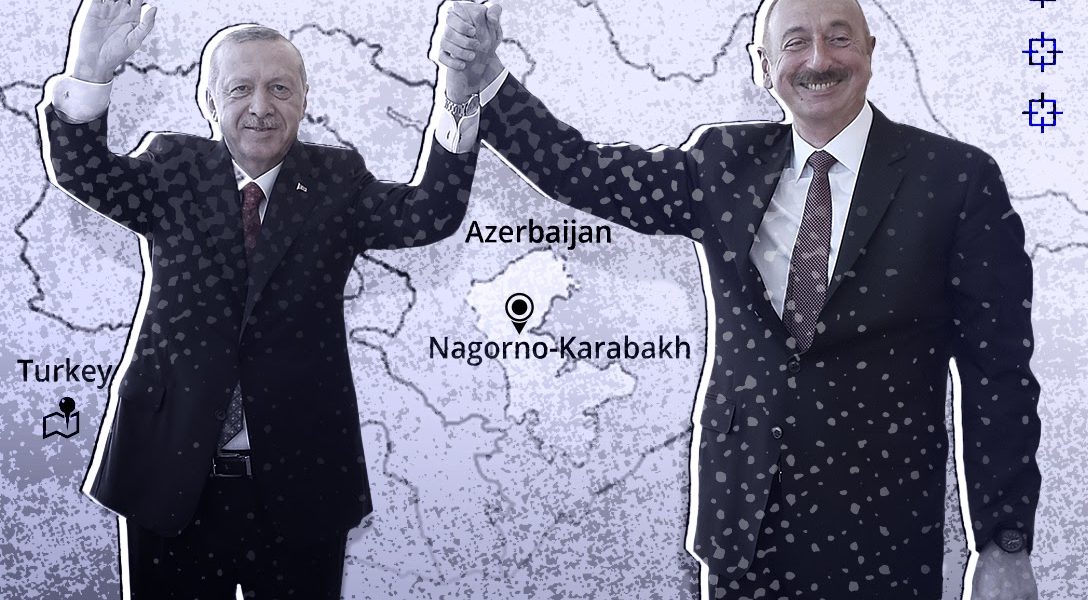 Azerbaijan Celebrates a Victory Made Possible by Turkey

This was the first military parade ever to celebrate one ex-Soviet nation’s victory over another.

Thousands of soldiers marched through central Baku, Azerbaijan’s capital and a Caspian Sea port of 3 million, to the beat of kettledrums and a brass band. Fighter jets whizzed overhead, releasing blue, red, and green smoke in the colors of the Azerbaijani flag while dozens of tanks, air defense systems, truck-mounted missiles, and drones rolled by cheering crowds.

The December 10 parade showcased Baku’s triumph over its sworn enemies — Armenia and its unrecognized satellite, Nagorno-Karabakh, a Delaware-sized, kidney bean-shaped mountainous enclave. Dominated by ethnic Armenians, it broke away from Azerbaijan in the early 1990s, triggering the first open war in the former Soviet Union. The breakaway quickly morphed into a smoldering conflict with occasional flare-ups and no diplomatic solution in sight.

Last fall, Azerbaijan reversed its fortunes with a 44 day-long blitzkrieg that killed thousands of troops on both sides and ended a month before the victory parade in Baku. According to a peace deal — effectively, an exhausted Armenia’s capitulation — Azerbaijan got back two-fifths of occupied territories.

Azerbaijan’s President Ilham Aliyev, beaming and triumphant, observed the parade from a podium, and next to him stood the man whose diplomatic and military support was crucial to the victory — Turkish President Recep Tayyip Erdogan. To Erdogan, the fight is far from complete.

“Azerbaijan’s saving its lands from occupation does not mean that the struggle is over,” Erdogan said. “The struggle carried out in the political and military areas will continue from now on many other fronts.”

Baku “could not defeat the Armenians alone,” researcher Nikolay Mitrokhin of Germany’s Bremen University told WhoWhatWhy. “Undoubtedly, Turkey’s meddling in the conflict, with its drones and air reconnaissance, and the deployment of several hundred experienced fighters, had a decisive effect.”

But Turkey’s aid was indeed decisive.

Erdogan supplied Azerbaijan’s army with armed personnel carriers, rocket launchers, ammunition, and hundreds of Turkish-made Bayraktar TB2 combat drones that can fly for 27 hours and carry laser-guided bombs. Developed by a company headed by Selcuk Bayraktar, an MIT-educated engineer and Erdogan’s son-in-law, the drones have been battle-tested by pro-Turkish forces in Syria, Iraq, and Libya.

These drones — along with Israeli-made reconnaissance and unmanned aerial patrol vehicles — spearheaded the advancement of the Azerbaijani army. They buzzed over demoralized separatist and Armenian forces, directing artillery fire, pinpointing as targets enemy tanks, missile systems, trenches, and troops.

The Armenians were not ready for death from above. Tactically and technically stuck in the 1990s, they apparently paid no attention to how drones redefined warfare in the Middle East.

The Armenians had wide and shallow trenches dug and leveled with graders. They didn’t move their personnel in jeeps or small groups, preferring larger military trucks. They didn’t relocate their artillery after striking Azerbaijani positions and barely disguised their weapons from the eyes in the sky.

“Armenia is, in essence, paying for its neoliberal discourse personified by Pashinyan.” — Aleksey Kushch, Ukraine-based analyst

These disadvantages were obvious from countless videos shot by the Azerbaijani drones.

Some analysts believe that the Bayraktar drones were operated by experienced Turkish servicemen.

“Most likely, Turkey’s UAVs [unmanned aerial vehicles, i.e., combat drones] have not been given directly to Azerbaijan but were directed and serviced by Turkish operators,” Pavel Luzin, a Russia-based defense analyst with the Jamestown Foundation, a think tank in Washington, DC, told WhyWhatWhy.

During the parade, Azerbaijani and Turkish flags — meters-tall and neatly folded — were displayed behind Aliyev and Erdogan.

Azerbaijan’s blue, red, and green banner and Turkey’s red flag are both adorned with a white crescent next to a smaller star. The flags were a visual confirmation of an old mantra favored by Erdogan and Aliyev: “Two states, one nation.”

Turks and Azerbaijanis share linguistic and cultural ties that date back to before czarist Russia’s conquest of the South Caucasus region some two hundred years ago. The Aras River separated the new Russian province from Turkey and Turkic-speaking northern Iran.

Two centuries later, at December’s parade, Erdogan recited a poem that lamented the separation and symbolized the ideology of pan-Turkism, a unity of all Turkic-speaking ethnicities in the Middle East, Central Asia, and parts of Russia.

“They separated the Aras River and filled it with rocks and rods. I will not be separated from you. They have separated us forcibly,” were the lines Erdogan recited.

A day later, Iran’s Foreign Ministry summoned the Turkish ambassador to be “informed that the era of territorial claims and expansionist empires is over.”

However, pan-Turkism is what may divide Turkey and Azerbaijan, some observers predict.

“It’s a radical mistake to think that Azerbaijan will become Turkey’s backyard,” he told WhoWhatWhy.

According to the peace deal, Azerbaijan got a land corridor to Nakhichevan, an isolated “autonomous republic” of Azerbaijan sandwiched between Armenia and Iran, with a small border with Turkey. Ankara plans to build a railroad across the corridor and a natural gas pipeline from the giant Caspian oil and gas fields that belong to Azerbaijan, Kazakhstan, and Turkmenistan.

Projects to rebuild infrastructure and housing in the corridor may be very lucrative for Turkish businesses.

“Turkey will have a large share of opportunities in rebuilding the region,” Baku-based political analyst Emil Mustafayev told WhoWhatWhy.

However, Turkey was not the only foreign power to gain an advantage from the war.

Despite expectations in Armenia, Nagorno-Karabakh, and Russia’s own Armenian community that Russia would send help, Moscow decided not to intervene. Its hands-off stance ignored the fact that it has a defense pact with Armenia and that it maintains a military base on Armenian territory.

One explanation is that Moscow may have wanted to punish reformist Armenian Prime Minister Nikol Pashinyan, who came to power in 2018. Pashinyan, who sought closer ties with the West, deposed a generation of war-seasoned, pro-Russian leaders from Nagorno-Karabakh. Among the deposed were proteges of separatists Robert Kocharyan and Serzh Sargsyan, who each served as Armenia’s president and are now under investigation for corruption and embezzlement.

“Armenia is, in essence, paying for its neoliberal discourse personified by Pashinyan,” Aleksey Kushch, an analyst based in the Ukrainian capital, Kyiv, told WhyWhatWhy.

However, it was Russia, not Turkey, that brokered the peace deal — and Russia is already deploying 2,000 peacekeepers to guard the new borders at 16 observation points.

Russia already has a military presence in two breakaway regions of neighboring Georgia, and the deployment will give the Kremlin a foothold in the South Caucasus region.

“Russia’s position always was that we have to come to agreements without any bloodshed,” poker-faced Russian President Vladimir Putin said a week after the Baku victory parade.