After the Attack on the Nord Stream Pipeline, What’s Next? Attacking Internet Cables?

Escalations in the Russo-Ukrainian war are piling up so quickly that the September 26 Nord Stream attack only periodically pops up in the news cycle. Yet the attack — which ruptured a major channel under the Baltic Sea carrying Russian gas to Germany — remains a mystery.

Russia officially blamed the United Kingdom for the attack, but has yet to provide any evidence, and Britain has staunchly denied the claims

The UN secretary general, as well as independent investigators from Sweden and Denmark, all concurred that the pipes — neither of which were operational at the time — were deliberately sabotaged. Traces of explosives and other foreign objects were found at the site by Swedish investigators. They haven’t publicly named their suspect.

A few hard facts have been established so far. Up to four blasts destroyed more than 50 meters (~165 feet) of concrete-coated steel pipes, at depths of 80 meters (~260 feet) or more. Experts say this required “extreme force” and submarine capabilities that only a handful of state actors, including Russia and the US, possess.

Though the Baltic Sea is riddled with old sea mines, explosives, and chemical weapons dating back to World War II, it is unlikely that the blasts — which took place hours apart at different sections of the pipes — were accidental.

Weeks before the blasts, both the US and Russia had conducted naval exercises in the Baltic Sea. In 2015, a NATO submarine munition was reportedly discovered sitting on top of one of the pipes.

“Soft Targets” Under the Sea

Russia’s attacks on Ukraine’s energy infrastructure are achieving remarkable success. After surgical strikes on transmission stations as well as power plants, the energy supply was down by as much as 50 percent in Kyiv at the end of October; the city continues to face massive shortages in what authorities have called an “unprecedented” crisis as Ukrainians prepare for what they call “the darkest winter.”

The operation in the North Sea sets a dangerous precedent for other state actors who may now be tempted to attack high value “soft targets” — vulnerable energy and communications infrastructure running deep underwater, such as the transatlantic cables that literally ferry the Internet between continents.

What appears to have stopped a tit-for-tat undersea struggle is that nobody wants to take the blame for kicking off such a destructive campaign. At least not so far.

“This attack is a first, and means that there will be others,” said Peter Layton, an Australia-based security expert and an associate fellow at the UK’s Royal United Service Institute.

“The pipelines need to be close to the attacking country and in an area where large numbers of ships delay attribution,” he said.

Layton believes the attack was an inside job and the likeliest suspect is Russia, with the goal of highlighting Europe’s energy predicament during the rapidly approaching winter.

Russia, for its part, has countered that theory with its own assertion that the US is trying to replace Russian gas with its own exported liquified natural gas (LNG).

As for where the next likely attacks will occur, Layton said there are “probably only quite limited areas globally where such attacks would then be practical.”

These include coastal waters off of Norway, also a major exporter of petroleum products and, in a shift of theater, South Korea and Japan might have to worry about North Korean attacks, he posited.

In addition to energy, the next lifeline to be targeted could be communications infrastructure, the European version of Politico magazine warned.

The vast majority of internet traffic flows over fragile underwater fiber optic cables. Without this flow of information, Western economic and military might cannot operate, some argue.

In that sense, these cables can be seen as NATO’s soft underbelly, even though Russia uses them, too. The attack on Nord Stream may serve as an excuse for Russia to hit back at those, whether or not the Kremlin takes responsibility for such attacks.

It is hardly a surprise that the question of who struck first is hugely controversial.

In Search of a Smoking Gun

Despite the seemingly shared interest in identifying a culprit, even NATO allies have declined to work together.

Sweden, in whose economic zone the Nord Steam blasts took place, refused to investigate the incident together with Denmark and Germany, citing national security concerns. 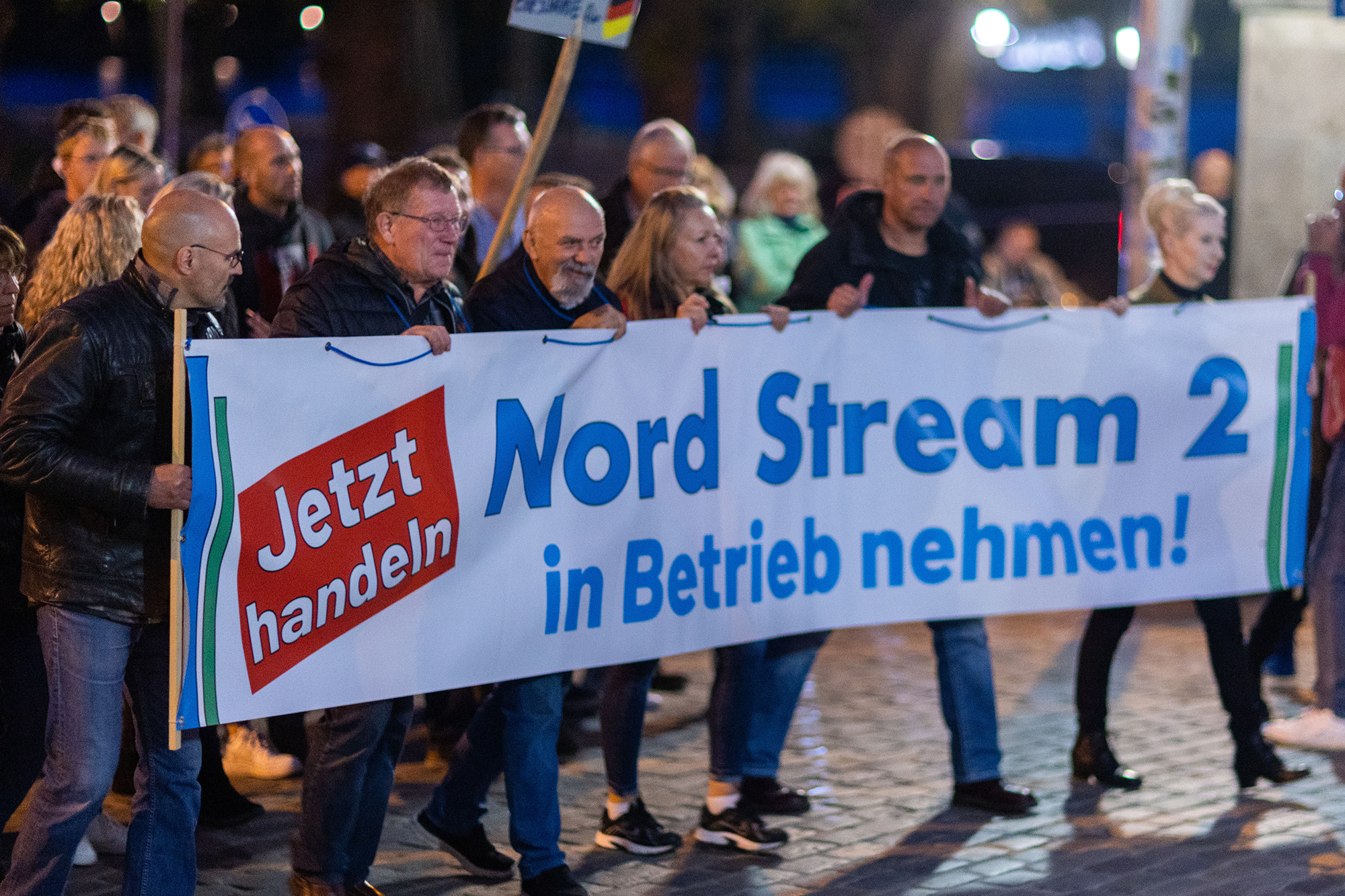 Prior to Russia officially blaming the UK, both the US and Russia denied involvement and blamed each other. Yet both may also be seen as potential beneficiaries.

At the time of the incident, Russia had already greatly reduced exports over the pipeline. Should responsibility fall on the US, that could drive a wedge between Washington and its NATO partners, in particular Germany. In recent months, Germany has struggled to make up for lost quantities of Russian gas and has sought more gas from European exporters.

As it happened, a part of the Nord Stream 2 pipeline — the more recent and controversial of the two pipelines whose certification was frozen by Germany after the invasion of Ukraine began — remains intact.

Russian President Vladimir Putin has offered to resume gas deliveries using the pipeline, something that Germany so far has refused to accept as it would constitute a symbolic diplomatic triumph for the Kremlin.

The US, on the other hand, has raked in steady profits from LNG exports to Europe and has frequently criticized the Nord Stream pipes for increasing European dependence on Russian gas.

Before Russia invaded, US President Joe Biden threatened to shut down the pipelines. And after the attack, Secretary of State Antony Blinken noted the moment presented a “tremendous opportunity” to remove a key weapon from Putin’s arsenal: energy supplies.

“It’s a tremendous opportunity to once and for all remove the dependence on Russian energy and thus to take away from Vladimir Putin the weaponization of energy as a means of advancing his imperial designs,” Blinken said, according to a State Department transcript.

The lack of solid facts has sent analysts scrambling to read the tea leaves. In a subsequently deleted tweet, Poland’s former foreign minister presented a photograph of the bombing site with the words “Thank you, USA.” Others speculated that amid widespread protests in Europe over energy prices and inflation, a deal between Germany and Russia for the restarting of gas imports was taking shape. The US, in that version of the story, acted in order to scuttle the deal, perhaps in conjunction with Poland and/or Ukraine.

Some analysts nevertheless say speculation about an impending tit-for-tat campaign against underwater infrastructure may be overblown.

“I do not personally believe that this is a prelude to a likely underwater war,” said George Voloshin, a Paris-based Eurasia analyst. “For one, security has been tightened around undersea cables for just this reason.”

“Of course, nothing can be excluded any longer, but to me there is no indication that Russia is preparing at this point to strike at underwater infrastructure across the West,” he added.

Yet in the weeks immediately following the attack, there were a number of suspicious incidents at oil and gas pipelines. Those included a leak on the Druzhba pipeline that carries Russian crude to Europe through Ukraine and Poland, and a separate leak on Malaysia’s Sabah-Sarawak Gas Pipeline that feeds one of the world’s largest LNG terminals.

In October, moreover, the Shetland islands off of Scotland were briefly left without communications after two separate underseas internet cables were damaged at the same time. No evidence of foul play has emerged in those cases so far.

But what will happen to the overland pipes that carry Russian gas to Europe through Ukraine?