Trekking north through a dangerous country, the thousands of people — families, men, women, and children — looked like members of a pilgrimage. They chanted slogans, prayed aloud, and hoisted five-star Honduran flags. Under the flags many carried banners emblazoned with the phrase “Fuera JOH” — “Out with JOH” — a reference to the president of Honduras, Juan Orlando Hernández.

“We need the world to understand the truth about Honduras,” said Danny Fuentez, a member of the migrant caravan, as he live-streamed back in 2018 from the Barretal shelter in Tijuana, Mexico. “Because the truth isn’t what you’re hearing on TV. That we’ve come just to look for dollars in the US, no! We’re fleeing! Fleeing from terror, from fear! We’re fleeing from hunger. We are fleeing because now we don’t have any hope!”

That sense of hopelessness was reflected by many of those leaving Honduras and embodied in President Hernández, who has made corruption a chief component of his career in office.

According to experts, if the Biden administration wants to address the root causes of migration from Central America, the US needs to divest political and financial resources from Hernández and support local Honduran organizations dedicated to fighting corruption.

The first part of that equation is already underway. Just a few days after taking office, President Biden announced a $4 billion plan to address the causes of migration and made it clear that he would limit the amount of money that the US sends directly to the governments of Honduras, El Salvador, and Guatemala.

However, politicians and policy experts say that local Honduran anti-corruption organizations still need support from the US — support that fell out of favor under the Trump administration.

That’s a point echoed by Biden’s special envoy to the region, Ricardo Zúñiga, who is the son of Honduran immigrants. “It’s important for the United States to show that we’re on the side of those who are victims of corruption,” Zúñiga said after a trip to Central America in April. He has floated the idea of creating a US task force to aid local prosecutions, though he has not spoken out about the Honduran military, which has become central to the corruption problem. 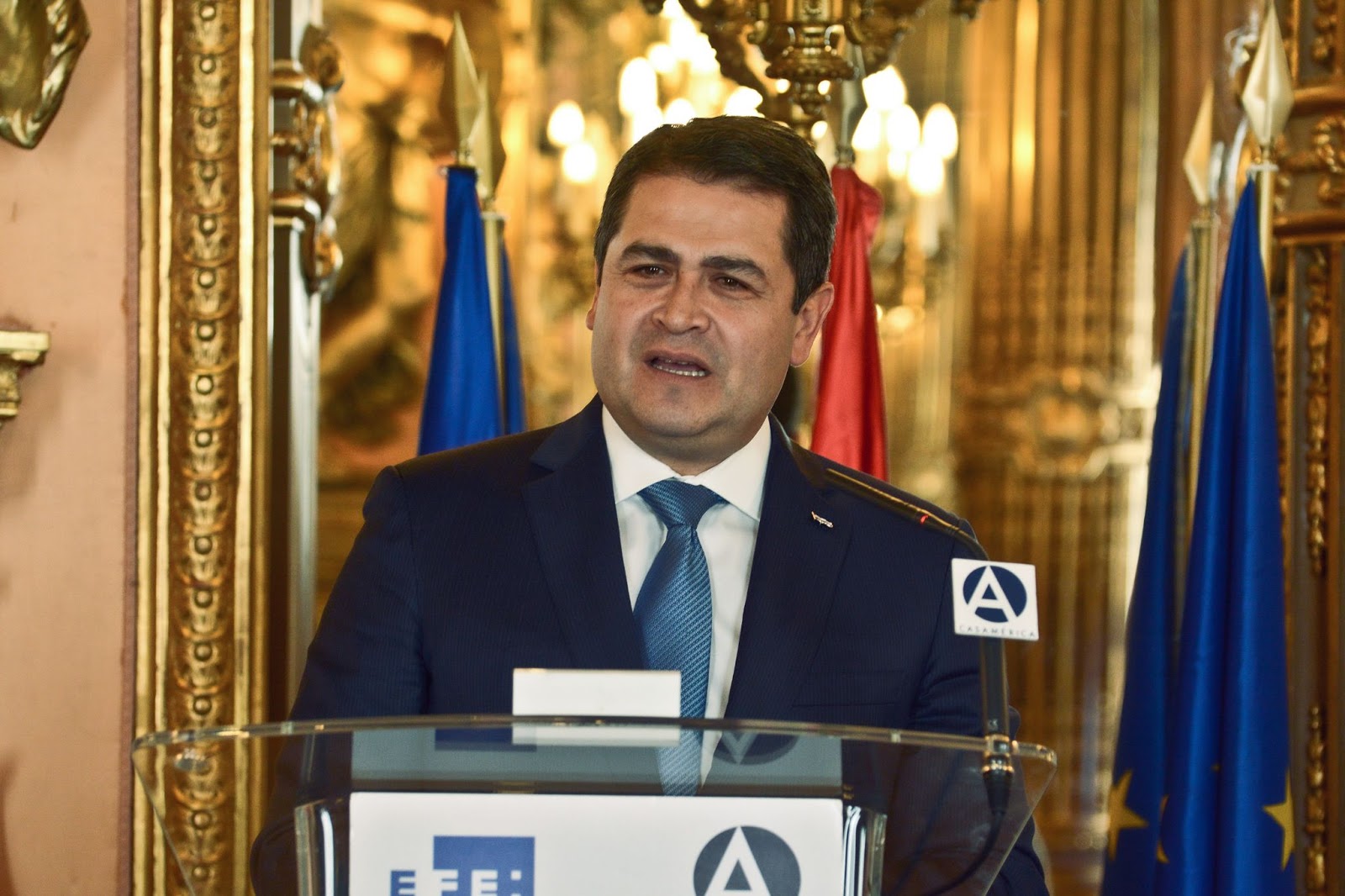 Corruption fuels migration in several ways. It fosters poverty and gang rule by subverting public funds and political will that would otherwise be used for governmental services, including health care, law enforcement, security, and economic development. Hondurans are keenly aware of this. According to a recent CID Gallup poll, 40 percent of Hondurans cited corruption as the number one issue their country faces, more than violence, poverty, unemployment, or the coronavirus.

“One of the trademarks of JOH’s government is building a dictatorship,” said Fátima Mena, Honduran congresswoman and chief of the Anticorruption Party. “Living in a dictatorship takes hope away,” she said about the effects of corruption on Hondurans, “and people are migrating because of the misery that JOH’s administration is causing.”

While the abuse of power is not uncommon in Latin America, Hernández has taken the craft far beyond the petty pocket lining of your average embezzler. He came to power in 2014, following an election where his campaign was funded in part by $250 million stolen from the health service, which left some 3,000 Hondurans dead due to the distribution of counterfeit medicine. It also was a campaign that US prosecutors have said was funded by millions of dollars from drug traffickers.

Since then he has used the military to crack down on political dissent, reduced or removed penalties for corruption, refused to renew internationally mandated anti-corruption bodies, committed electoral fraud, and worked directly with narcotraffickers — among them his younger brother, Tony, who was recently sentenced to life imprisonment in New York for leading “a violent, state-sponsored drug trafficking conspiracy.”

Federal prosecutors charged that Tony Hernández “commanded heavily armed members of the Honduran military and Honduran National Police; he sold machine guns and ammunition to drug traffickers, some of which he obtained from the Honduran military; he controlled cocaine laboratories in Colombia and Honduras; he secured millions of dollars of drug proceeds for Honduras’s National Party campaigns in connection with presidential elections in 2009, 2013, and 2017; and he helped cause at least two murders.” Although implicated in many of his brother’s crimes, Hernández was never charged.

“His dictatorship is heavily reliant on his use of the military. Now the military are experts in health, experts in agriculture. He puts a lot of money into the military to solve these kinds of issues and has made a special law prohibiting investigation into military spending.” — Fátima Mena

The pandemic had done nothing to stop the corruption in his government, which recently spent $82 million on seven mobile hospitals. Only two were built, and neither is currently operable as they came with no medical equipment for treating COVID-19. Marco Bográn, head of the government body responsible, was not sentenced to prison but instead was fined, barred from leaving the country, and ordered to appear before a judge every week.

The issue for Biden is that this erosion of governmental responsibility has happened with the support and funding of the United States. In 2017, Hernández’s reign over Honduras got a serious boost when then President Trump recognized his second presidential victory despite the Organization of American States’ call for new elections after finding widespread process “irregularities and deficiencies,” including “deliberate human intrusions in the computer system,” and “extreme statistical improbability with respect to participation levels.”

Mena told WhoWhatWhy that it is Hernández’s use of the military in particular that has solidified his corruption machine in his second term, and that’s where the US can be applying pressure.  “His dictatorship is heavily reliant on his use of the military,” she said. “Now the military are experts in health, experts in agriculture. He puts a lot of money into the military to solve these kinds of issues and has made a special law prohibiting investigation into military spending.”

Besides using security forces to launder money, Hernández uses them as a cudgel against political dissent, Mena points out. The military and police are used to put down political protests in Honduras, often with live ammunition. In the protests following Hernández’s contested 2017 election, 31 protesters died, at least 21 of whom were killed by Honduran security forces.

Given the level of political repression and embezzlement that happens through the military, policy experts agree that the US must rethink its relationship with the Honduran armed forces.

“His use of the military is worrisome,” said Adriana Beltrán, head of the Washington Office on Latin America’s Citizen Security Program. “We should be cutting funding to the military as it is a human rights concern.” 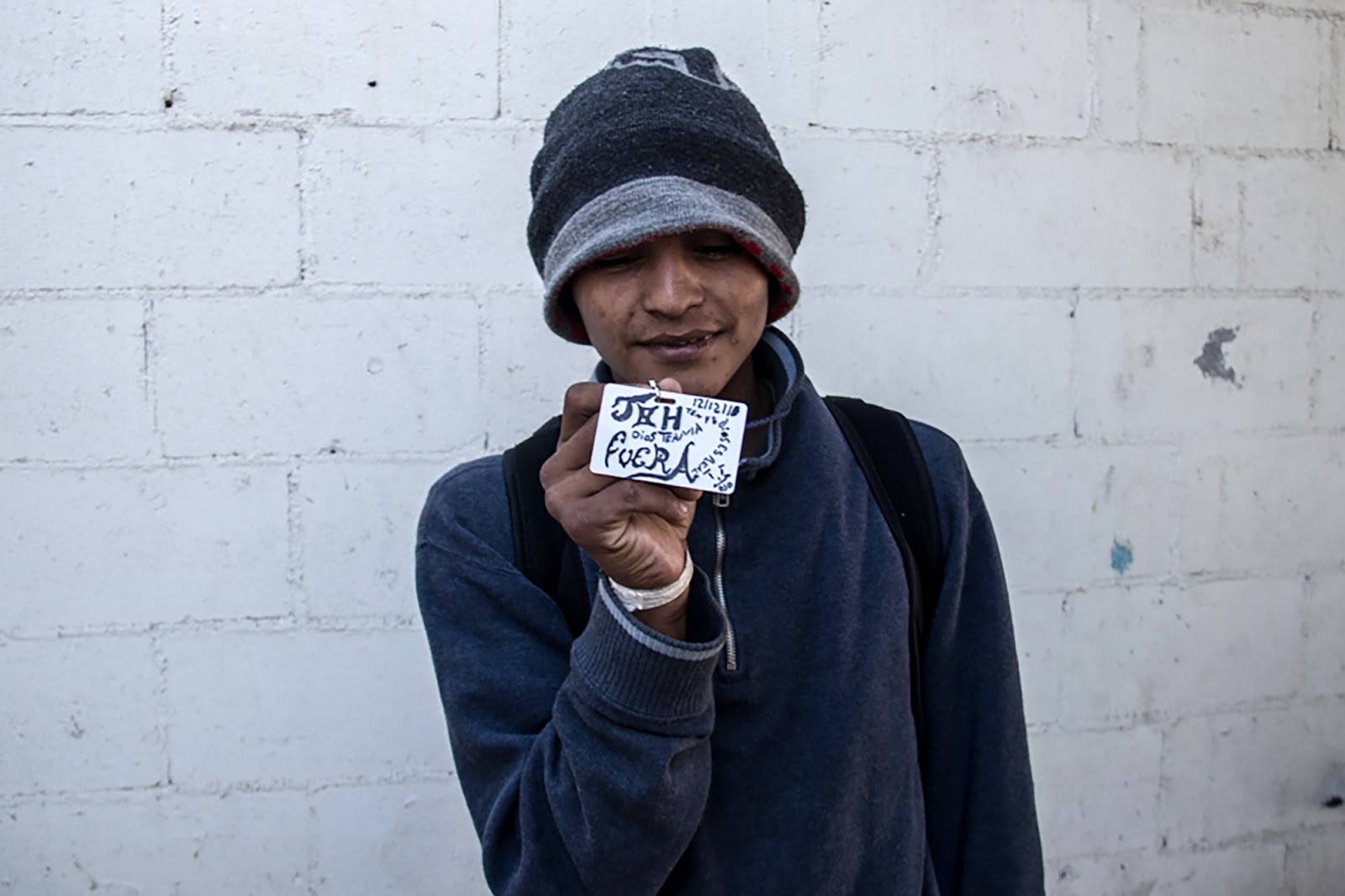 A migrant displays his ID card at a shelter in Tijuana, Mexico. On the back is written “Out with JOH” in reference to Honduran President Juan Orlando Hernández. Photo credit: Peter Kronish / WhoWhatWhy

While the US Congress has passed legislation limiting military aid, money is still going to the Honduran armed forces and police through the Pentagon for use in the ongoing war on drugs.

Instead of supporting the Honduran military, Beltrán said, the US should invest in local anti-corruption activists. “The region doesn’t lack committed and capable actors both within and outside of government. There’s a wealth of people in civil society that have been working under very difficult circumstances to defend and enhance the rule of law. Those are organizations with whom the US should be partnering.”

Beltrán particularly mentioned the Special Prosecutor’s Unit Against Corruption Networks (UFERCO), which has been instrumental in finding evidence of corruption, and the Anti-Corruption Coalition of Honduras, of which Mena is a member. She also recommended the US enforce the Magnitsky Act, which would allow it to level sanctions directly against Hernández.

Thus far, however, little direct action has been taken against Hernández, and many activists feel that the probability of rapid change is unlikely. But there is some hope in Congress’ recent adoption of former Rep. Eliot Engel’s “Northern Triangle Enhanced Engagement Act,” which would establish a list of corrupt officials in the region, bar them from entry to the US, and open the door to future action such as seizing their assets in the US.

Mena remains optimistic. She says it’s because she’s a fighter. She also says it’s partially because Hernández is not slated to run for another term in November, which could make him and his system more vulnerable to international action. “We need US support in this fight,” she said.