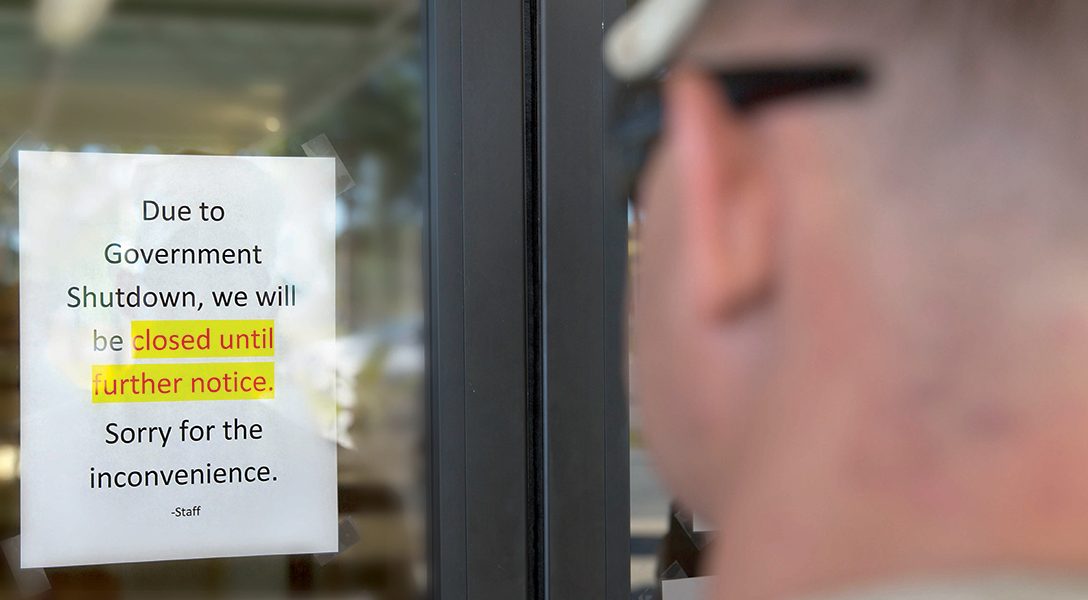 Service members were greeted by locked doors at the Harriotte B. Smith library at the Marine Corps Base Camp Lejeune in North Carolina during the 2013 government shutdown. Photo credit: US Marines
Government Integrity Immigration

A Kinder, Gentler Shutdown? Don’t Count on It

Some people will shrug off this government shutdown — the ninth in a series that began in 1980 — because we’ve lived through them before with seemingly little consequence. Essential services like homeland security, TSA scanning at airports, and defense will continue.

Some shutdowns have lasted a day or two, others a week or more. But the longer a shutdown lasts, the more it wreaks havoc with the economy, the electorate and, of course, the government itself. In 2013, a 16-day shutdown over funding the Affordable Care Act took an unwelcome chunk of change out of the economy. The financial rating agency, Standard and Poor’s, claimed the shutdown had “taken $24 billion out of the economy and shaved at least 0.6 percent off annualized fourth-quarter 2013 GDP growth.”

At least for now, the stock market seems to be shrugging off this shutdown, with some analysts claiming that the economy is more resilient and more likely to weather any disruption, and others claiming that, historically, shutdowns have had minimal impacts on stock prices.

However, one example of how the shutdown can play out for some industries is Lockheed Martin, one of the Pentagon’s largest suppliers of military aircraft and equipment, including the trillion-dollar F-35 Joint Strike Fighter program. Lockheed has said the shutdown triggered contingency plans to ensure any civilian furloughs would not result in costly production delays. But those contingency plans are also expensive, and most likely include overtime for existing personnel.

The government is, after all, a very big business, issuing contracts worth billions, grants to universities and research hospitals, and paychecks to 2.1 million people it employs directly. A much smaller number of people than the 800,000 who were furloughed in 2013 are likely to get temporary time off though, since most of the agencies plan to continue operating with 50 to 60 percent of their staffs. Mick Mulvaney, director of the White House Office of Management and Budget, said Friday, “We’re going to manage the shutdown differently; we are not going to weaponize it.” Related: Government Shuts Down as Democrats Hold the Line on DACA

Americans who depend on their Social Security checks will continue to get them. Others will get unemployment insurance, welfare checks, food stamps and benefits provided by other social safety net programs. But if you’re applying for the first time, good luck. With limited staffs available, your application will take more time than usual.

The Postal Service is not affected by the shutdown since it’s self-funded (or should we say, strives to be).

What About the IRS? It’s Tax Time!

CNN reports that the IRS is keeping 35,076 employees on the job, about 43.5 percent of its total workforce. Since the tax bureau isn’t accepting returns until January 29, it’s unlikely your refund will be affected unless this shutdown continues into February.

But tax filing isn’t the only problem this year. With the massive changes in the 2018 tax law for both corporations and individuals, the IRS helpline is expected to be closed. Even now, there’s confusion about how much is supposed to be withheld in 2018 from paychecks in accord with the new brackets.

Similarly, if your house burned down in the California fires or was destroyed by mudslides, floods, hurricanes, swarms of locusts or other signs of climate change, don’t count on FEMA during a government shutdown. FEMA is not considered “essential,” even though many states have declared federal disasters recently and need help. For Californians who lost their homes, their clothes and their treasured memories to fire or mudslides and have no place to stay and nothing to wear, FEMA is not only essential, it’s a lifeline.

Whether this shutdown ends soon or not, it may be yet another reason to rethink the budget process, possibly eliminate the debt ceiling and get on with the business of government.