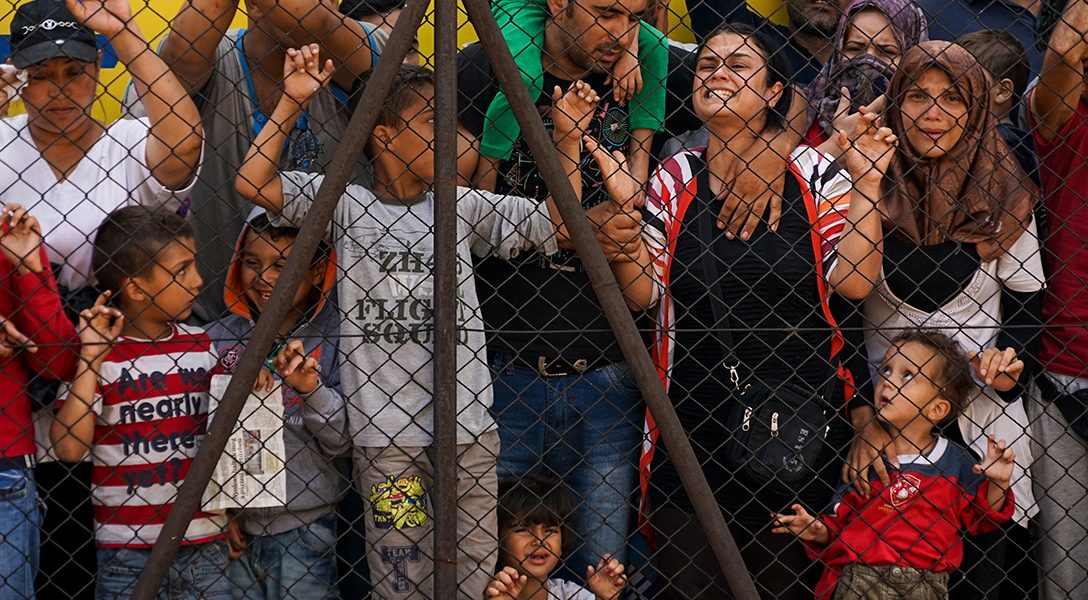 In recent years, both the US and Europe have faced what seems like a never-ending flood of refugees; the US from Mexico and Latin America, and Europe from North Africa and the Middle East. The affected countries trying to absorb this flood of refugees have considered this uncontrolled influx something approaching national emergencies.

What to do with all these people? Where to house them? How to feed them? How to contain the inevitable backlash from their own citizens and the resulting growth in right-wing nationalism?

While those problems remain largely unsolved, a bigger problem looms just over the horizon: mass migration of climate refugees. This surge of climate refugees will dwarf current immigration problems. While today the US and southern Europe face a flood of refugees, most from dysfunctional countries or regional wars, the climate refugee problem will be a tsunami in comparison.

Enormous refugee populations, not numbering in the millions or the tens of millions, but in the hundreds of millions, could flee areas of the world where changing climate ravages already-marginal agriculture, whether because of flooding, drought, or rising temperatures. Recently I spent a week reading research papers by scientists, world health organizations, and international bankers on this very subject. The bottom line: we ain’t seen nothing yet.

We are now witnessing the highest levels of movement on record. About 258 million people, or one in every 30, were living outside their country of birth in 2017. That is both a record high — there were 173 million in 2000 — and an alarmingly volatile figure: a 2003 projection anticipated that by 2050, there would be up to 230 million international migrants. The latest revised projection is that there will be 405 million international migrants by 2050. — Guardian

While regional wars and poor governance have fueled most of our current migrations, climate-fueled migrations are just now beginning to ramp up. The countries of origin for the coming climate change refugee flows will be many of the usual suspects, researchers predict.

And, from the National Academy of Sciences:

This suggests that crop yield–induced migration will be a significant issue in many areas of the world that are expected to experience a substantial reduction in yields as a result of climate change, including much of Africa, India, Bangladesh, Latin America, and Australia, among others… our findings are significant from a global perspective given that many regions, especially developing countries, are expected to experience significant declines in agricultural yields as a result of projected warming. — National Academy of Sciences

Researchers at the University of California, San Diego, dug deeper, outlining the causes and effects of predicted climate change on mass population movements:

First, environmental problems may directly lead to emigration. Secondly, environmental stress may lead to resource conflicts, and these conflicts may produce refugees. Each type of migration may lead to conflict in receiving areas; however, they may not be equal in their effects … global climate change has the potential to directly uproot people from their home communities. Research on this topic suggests several possible mechanisms through which people may be forced out of their current habitat:

Sea-level rise caused by a reduction in glacial coverage will lead to the flooding of coastal areas.

Desertification will cause people to migrate out of unproductive and water-scarce areas.

Greater variability in weather patterns will lead to dramatic climate events such as hurricanes, typhoons, and extreme cold which will disrupt human settlements.

Warming oceans and ocean acidification endanger coral ecosystems and the artisanal, pelagic, and aquaculture fisheries upon which hundreds of millions of people depend for food.  Meanwhile, lack of access to safe drinking water is a further major contributor to morbidity and mortality, particularly among children, in developing countries. Changes in rainfall and river flows jeopardize human health via impacts on agriculture, daily hydration, cooking, and domestic hygiene. — Idean Salehyan

Besides land-based impacts, climate change is also warming ocean waters and raising sea levels worldwide. Researchers at the School of Public & Environmental Affairs took a close look at this trend and came to some startling conclusions:

Predicted effects of a one-meter rise in sea-level, assuming no adaptation measures are taken. In Asia, more than 117 million people are exposed to inundation, in Europe 13.5 million, in Africa 12 million, in Latin America 760 thousand, and in Pacific islands 300 thousand. Bangladesh may lose 21% of its land. Several islands in the Pacific may be completely submerged. Moreover, approximately one billion people live at sea level or a few meters above. Sixteen of the world’s nineteen largest cities (population above 10 million) are located on coastlines. The implications are daunting.— Rafael Reuveny

Like coastal regions, agriculture zones will depopulate rapidly as a result of climate change.

Logically, regions whose livelihood depends on agriculture are more likely to experience the adverse effects of environmental degradation. People in these regions are therefore more likely than others to migrate when facing environmental problems. The shares of the labor force employed in agriculture in 2000 were 58% in Africa, 51% in Asia, 24% in Central America, 18% in Oceania, 14% in South America, 8.6% in Europe, and 6% in North America. In Sub-Saharan Africa and South Asia, the agricultural employment shares were highest: 66% and 58.5%, respectively.  — Rafael Reuveny

For those still in doubt about how seriously a changing climate can affect large agricultural populations, they need only pick up a history of the American Dust Bowl years of the 1930s. Recent studies concluded that about 2.5 million left the Great Plains in the 1930s due to environmental degradation, inundating western states with climate refugees. The influx got so bad that the state of California actually closed its border to migrants from the affected areas (dubbing them “Okies”), who were simply fleeing their then worthless midwest farms, with many continuing north into Oregon and Washington. Four families from the Dust Bowl in Texas in an overnight roadside camp near Calipatria, California, in March, 1937. Photo credit: ATTRIBUTION GOES HERE

The American Dust Bowl years offer just a hint of how fast mass populations react to devastating changes in their local climate. And that’s exactly what’s beginning to happen, not just on land, but at sea as well, on which billions of people depend for much of their diet.

Climate change is already inducing marine animals to migrate, and according to a new study published in the journal Nature Climate Change, it’s starting to make people move, too. They found, high temperatures, particularly during the spring and winter farming season, were the dominant driver of mass migration. It’s not that it suddenly became too hot for people to live. But as temperature and weather patterns change, the previously productive ground may become uneconomical to work. High heat wipes out the farming economy, the researchers suggest, causing Pakistani men to pack up and leave for greener pastures…The risk of a male, non-migrant moving out of the village is 11 times more likely when exposed to temperature values in the fourth quartile. — Smithsonian

Such large and uncontrolled migrations bring with them a host of problems for the receiving nations as well, as we’ve seen already in both the US and Europe. A recent study by the National Institute of Health discovered:

Current migration troubles in Southern European countries give us a preview of what’s to come once the flood of climate migrants begin arriving, according to the environmental nonprofit NRDC:

In the European Union, where the stresses and strains associated with processing large numbers of migrants have already reached crisis proportions, experts predict that the annual stream of those seeking safety within its borders will triple by the end of the century due to climate-related migration. And a 2018 World Bank Group report estimates that the impacts of climate change in three of the world’s most densely populated developing regions — sub-Saharan Africa, South Asia, and Latin America — could result in the displacement and internal migration of more than 140 million people before 2050. That many people on the move could easily lead to massive political and economic strife and significantly stall development in those regions. — National Resources Defense Council

While the Trump administration and other climate change deniers continue to dispute and downplay the seriousness of this crisis, scientists, the vast majority of them, say the data doesn’t lie.

The largest numbers of people that hydro-meteorological disasters affect are found in Asia, Africa, and Latin America, which reflects the pattern of dependence on the environment for livelihood. All forecasts predict considerable global environmental degradation, including a rise in sea-level, inundation of coastal areas, more intense and frequent extreme weather events, changes in temperatures and precipitation, declining freshwater resources, and falling soil productivity. — Rafael Reuveny

Finally, if you’re not sufficiently alarmed, a recent review of climate change predictions has shown that, rather than overstating the crisis (as Trump and his kind like to allege), scientists have actually been underestimating both the size of impact and speed of climate change. According to Scientific American:

To develop a consistent picture of long-term trends, techniques had to be developed to compensate for the errors in the older (19th & 20th century) measurements and reconcile them with the newer ones … Because the oceans cover three-fifths of the globe, this correction implies that previous estimates of overall global warming have been too low. Moreover, it was reported recently that in the one place where it was carefully measured, the underwater melting that is driving disintegration of ice sheets and glaciers is occurring far faster than predicted by theory — as much as two orders of magnitude faster — throwing current model projections of sea-level rise further in doubt. — Scientific American

Why Climate Change Is So Hard to Tackle: Our Stubborn Energy System

So, here we are now, with developing countries around the globe struggling, and largely failing, to handle the current flow of refugees seeking refuge from their poorly run, civil-war-ravaged countries. Meanwhile, a category 5 hurricane of climate change driven migration looms just over the horizon. A migration of epic proportions, in which possibly as many as a billion refugees will flood the borders of more fortunate nations. No immigration programs, no matter how well planned and run, could even begin to manage, much less survive, such an event.

If the governments of the planet continue their lackluster approach to countering the drivers of climate change, even this late in the game, then we can all expect our grandchildren to live very difficult lives. As pressures rise on migrant-receiving countries, they will inevitably militarize their borders. And from there it all goes downhill… big time.

Sorry for such a gloomy report, but there’s simply no more time left to sugarcoat this bitter pill. It’s time to call climate deniers what they are; criminally negligent… at best. And any person running for public office who continues to equivocate on this matter needs to be rejected out of hand, no matter how good they may be on other issues. Because folks, time’s up.