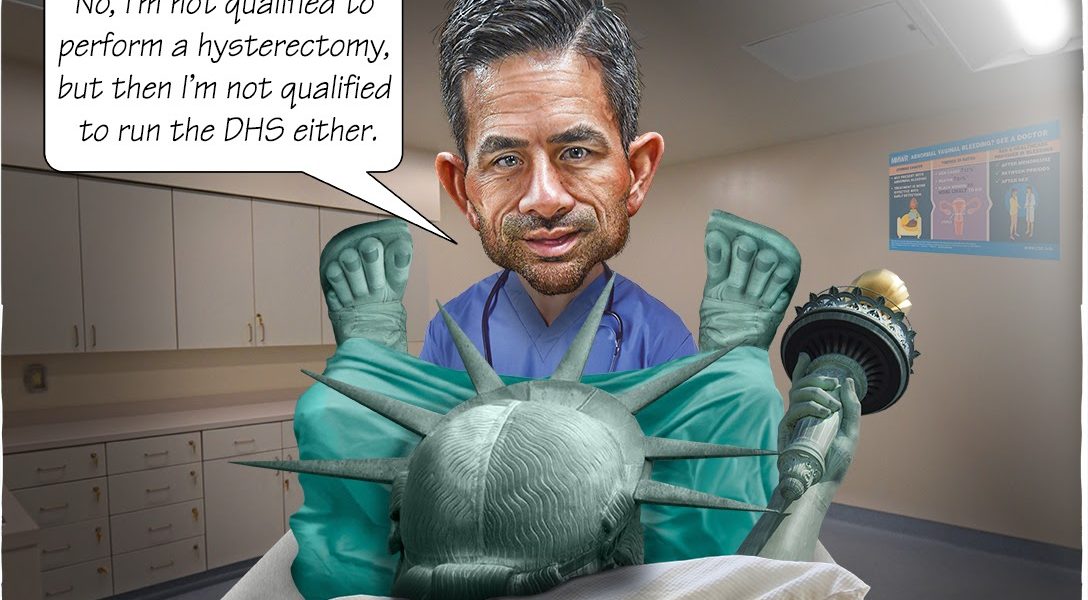 A whistleblower’s claims that immigrants at a federal detention center in Georgia were subjected to unwanted hysterectomies are horrifying. They revive memories of medical abuses in the 20th century such as eugenic sterilizations, the Tuskegee syphilis experiment, and the practice of testing new pharmaceutical drugs on prisoners.

The claims related to hysterectomies (surgery to remove the uterus that leaves women unable to bear children) have prompted the most outrage. But they are only a small part of the story — another example of systematic abuse of refugees taken into custody by US Immigration and Customs Enforcement agents after crossing the southern border.

The complaint filed on the whistleblower’s behalf with the Department of Homeland Security’s inspector general, Joseph Cuffari, contains 27 pages of unpleasant details. Among them: shoddy care for bewildered patients, fabricating or shredding of medical records, and disregarding COVID-19 safety procedures for both detainees and employees. Additionally, they describe a casual disregard for one of the ethical foundations of modern medicine: ensuring that patients understand — and give informed consent to — their treatment.

Taken as whole, the complaints make an even stronger argument for replacing the DHS’s acting secretary, Chad Wolf, who bears overall responsibility for ICE and was the author of the infamous policy to separate refugee parents from their children. He also sent black-clad, anonymous Customs and Border Protection officers to confront protesters in Portland, OR, and attempted to downplay Russian attempts to interfere in the 2020 elections — the focus of another whistleblower complaint earlier this month.

Despite — or perhaps because of — these actions, President Trump announced in August that he planned to nominate Wolf as permanent Homeland Security secretary. A federal judge ruled September 11 that Wolf’s appointment as acting secretary in 2019 was invalid and that he is serving unlawfully.

The accusations related to the Georgia facility are contained in a complaint by four advocacy groups. They involve ICE’s Irwin County Detention Center in Ocilla, operated by LaSalle Corrections, a private company. Dawn Wooten, a licensed practical nurse at the center, said female detainees underwent gynecological procedures without fully understanding or consenting to them. Additionally, Wooten said she was told by several women detained at the facility that their uteruses had been removed without their consent.

“The appalling conditions described in the whistleblower complaint — including allegations of mass hysterectomies being performed on vulnerable immigrant women — are a staggering abuse of human rights.”

She added that according to ICE data, since 2018 only two individuals at the center had been recommended for hysterectomies by specialists. “These recommendations were reviewed by the facility clinical authority and approved,” Rivera said.

The complaint prompted widespread calls for an investigation. “If true, the appalling conditions described in the whistleblower complaint — including allegations of mass hysterectomies being performed on vulnerable immigrant women — are a staggering abuse of human rights,” House Speaker Nancy Pelosi (D-CA), said in a statement. A letter from 173 members of Congress also called for a probe and a progress report from Cuffari, the inspector general, by September 25.

Mexico joined the angry chorus with its Ministry of Foreign Affairs requesting a report from US authorities not only about the hysterectomy issue, but also of alleged sexual abuse of a Mexican citizen by ICE agents in El Paso, TX.

After Wooten’s complaint was made public, lawyers for some of the women told NBC News the hysterectomies were performed by a local gynecologist, Dr. Mahendra Amin. His attorney, Scott Grubman, declined to say exactly how many procedures the doctor had performed on detainees, but said Amin would “vigorously deny” any allegations of misconduct.

“Dr. Amin is a highly respected physician who has dedicated his adult life to treating a high-risk, underserved population in rural Georgia,” Grubman said.

However, Amin had been previously accused by state and federal authorities of falsely billing Medicare and Medicaid in an investigation that led to a $520,000 settlement in 2015.

Nurse Dawn Wooten alleges mass hysterectomies performed at Ga. ICE facility: “I had several detained women on numerous occasions that would come to me and say, ‘Ms. Wooten, I had a hysterectomy. Why?’ I had no answers as to why they had those procedures.” https://t.co/k1pwKgJlHP

Questions have been raised about the credibility of Wooten, who was demoted to a part-time position in July, which she said was in retaliation for her complaints about COVID-19 safety practices. At a September 15 news conference in Atlanta, her attorneys refused to release the statement she had made to the inspector general’s office. Wooten gave reporters another statement, which contained no reference to mass hysterectomies, but refused to answer questions.

“An even more blatant abuse was the Tuskegee Syphilis Experiment carried out by the US Public Health Service.”

Still, the allegations are an unwanted reminder of barbaric, government-sanctioned medical abuses during the 20th century. More than 30 states had eugenic-sterilization laws in the early 1900s, and tens of thousands of Americans underwent involuntary sterilization. In their letter to the DHS inspector general, members of Congress cited a University of Vermont report that chronicled forced sterilization in all 50 states. By 1963, Georgia had sterilized more than 3,000 people and had the fifth-highest sterilization rate in the nation.

An even more blatant abuse of human rights was the Tuskegee Syphilis Experiment carried out by the US Public Health Service to study the effects of untreated syphilis. The study began in 1932 and enrolled 600 Black men who lived in the vicinity of Tuskegee, AL. It lasted until 1972, and despite the introduction of penicillin in 1943 to treat syphilis, the men enrolled in what has been described as a 40-year death watch never received the drug.

Another example followed the Food and Drug Administration’s decision in the early 1960s to require multiple clinical trials for approval of new drugs. Pharmaceutical companies turned to the nation’s prisons for a ready supply of research subjects for Phase 1 safety studies. As of 1976, 85 percent of these first-in-human trials were being conducted in prisons, according to a national report. Additional examples of abusive experiments included injecting the hepatitis virus into mentally disabled children at Willowbrook State School in the late 1950s, and exposing people to radiation during the Cold War years to learn its harmful effects.

Federal legislation was supposed to end such abuses. But the Georgia allegations, at a minimum, raise questions about whether the detainees — all from foreign countries, speaking different languages — understood their medical care.

“Informed consent to medical treatment is fundamental in both ethics and law,” declares the American Medical Association’s code of ethics. “Patients have the right to receive information and ask questions about recommended treatments so that they can make well-considered decisions about care.”

In the complaint, Wooten does not say how many women at the detention center were subjected to unwanted surgeries, but she was concerned by the high numbers and questioned whether they consented to — or even understood — what was happening to them.

“I’ve had several inmates tell me that they’ve been to see the doctor and they’ve had hysterectomies and they don’t know why they went or why they’re going,” Wooten said.

The US treatment of refugees has been an affront to international values, especially under Trump’s administration. But the stories emerging from the Georgia center should be the last straw. They project an ugliness and a lack of respect for human rights that most Americans thought were buried long ago.