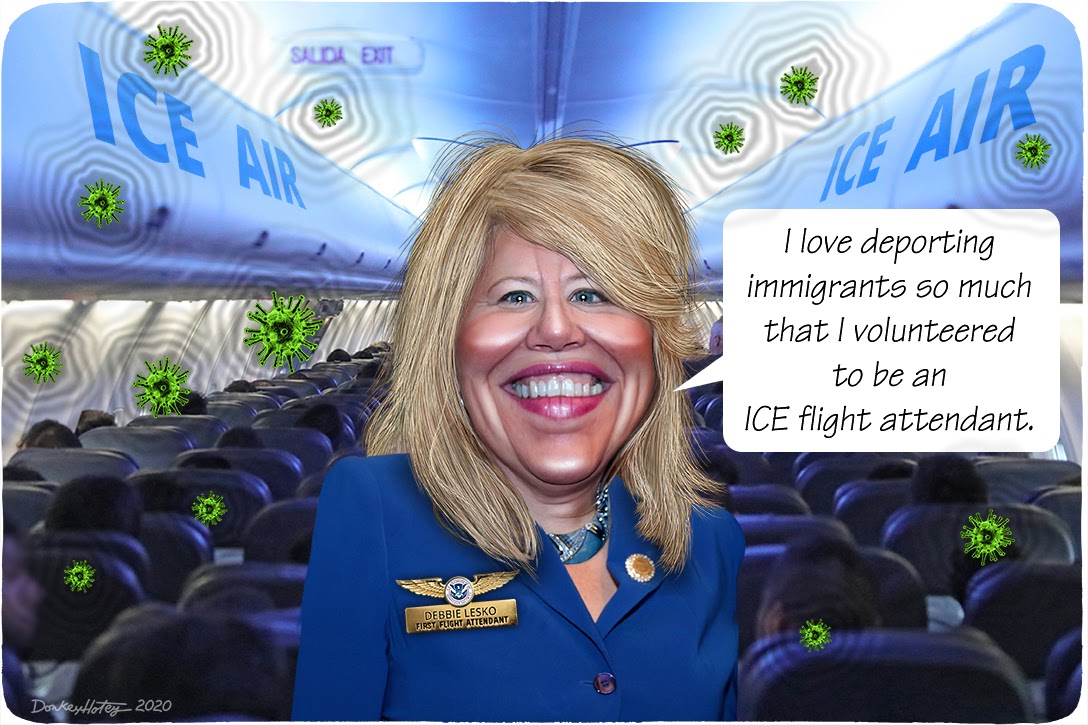 It is hard to say which Trump-era federal agency has been the most morally bankrupt during this time of crisis.

Is it the Department of Justice, headed by an attorney general who has threatened governors with legal action if they impose restrictions to limit the spread of coronavirus that he deems too draconian?

Is it the Environmental Protection Agency, which is forging ahead with its agenda to relax long-standing regulations that protect us from the very air pollution that has made the pandemic worse?

Or is it ICE, the Immigration and Customs Enforcement agency?

ICE might seem like a second-tier villain these days. Not much attention on catching undocumented immigrants in the news, where the pandemic has crowded out almost everything else. But it appears that ICE knows no rest. In March, after ICE implied that it would only focus on immigrants implicated in actual crimes, ICE Acting Director Ken Cuccinelli made clear that his folks had not totally given up on other apprehensions. In a statement, he promised that as long as his agents could do their job without risking their own safety, ICE would continue to go after any “removable aliens” when they could. Apparently, the health of those migrants is of no importance.

The agency has even found a new product for the US to export: coronavirus. It is being carried by some ICE detainees that our government is shipping back home.

On just two flights of deportees, Guatemalan health officials found that 70 of the nearly 120 passengers were infected.

As of April 18, about 1,600 ICE detainees had been sent back to Guatemala, and those returning may constitute more than a third of the country’s infected. No wonder Guatemala’s president has indefinitely suspended flights from the US.

And as much as the Trump White House may want to, it’s not possible to export all detainees to their countries of origin. So the White House’s fallback position has been the status quo. While ICE has released several hundred undocumented immigrants on a case-by-case basis for a variety of reasons — age, underlying medical conditions, or lawsuits — most of the country’s 32,000 detainees remain crowded together in scores of facilities in small towns across the country, mostly in rural America. As of mid-April, only a few hundred had been tested, and of that total, more than 100 tested positive.

Detainees know all too well the danger they are in.

At the Richwood Detention Center in Louisiana, 179 detainees signed a letter asking for

freedom under any condition and supervision terms, parole, bond, bail or GPS tracker. … We are not criminals, our unique crime was to come to this country looking for asylum, and in this moment our biggest fear: we haven’t the sanitizer-hygienic conditions needed if the Virus would get into the center.

Detainee hunger strikes reportedly have occurred all over the country. In an ICE detention center in rural Farmville, VA, at least 100 inmates participated in a strike.

“[We] are panicking because we have no security [from the virus]” a Farmville inmate from El Salvador told the Washington Post. “We are trying everything we can to leave, to be with our families, where we can be safe.”

Detainees are right to worry. Consider what happened when another infectious illness, mumps, began circulating in detention centers in 2018. Over the course of a year, a handful of mumps cases turned into a major health crisis, infecting 898 adult immigrants and 33 staff members.

Some members of Congress understand the danger. In April, Rep. Pramila Jayapal (D-WA) and Sen. Cory Booker (D-NJ) introduced a bill requiring nearly all detained immigrants who are not threats to the public be released. It is expected to pass the House.

But some Republican lawmakers are far less concerned. Rep. Debbie Lesko (R-AZ) recently told Newsmax host and former White House press secretary Sean Spicer that she understood that sometimes detainees had to be released to protect border patrol staff. But she added: “I’m opposed to just letting people in ICE detention centers go. Unless there’s really some reason… we should not.”

Democrats, she charged, “seem to want to prioritize illegal immigrants over US citizens…. I don’t understand it. It’s a head scratcher for me.”

It’s hard to know what to fault most in her statement — the cruelty or the sheer stupidity.

Lesko would be wise to read the findings of two physicians with expertise in infectious disease, detention health, and public health, who advise the Department of Homeland Security’s Office of Civil Rights and Civil Liberties.

Drs. Scott A. Allen and Josiah Rich have been raising the same alarms since February. Their message? If DHS and ICE don’t get a handle on containing this, it will have disastrous consequences for all Americans.

In a March 19 letter to Congress, they suggested actions that should have been obvious to ICE, such as stopping the routine transfer of detainees from center to center, across states. That seems like a recipe for disease transmission.

Ditto for keeping families inside crowded detention centers. The doctors pointed out that it’s easy for children to pick up viruses, noting that even before this pandemic hit, seven kids in these centers died of infections such as influenza and chicken pox. While kids often get very mild symptoms from COVID-19, they can pass it on to their elders, with more lethal effects.

The doctors also urge other precautions the government should be taking: early screening of detainees, isolating those who have been exposed to the virus, getting the ill detainees to hospitals.

But the doctors stress that there is only one real solution to this crisis.

“It is essential to consider releasing all detainees who do not pose an immediate risk to public safety,” they wrote, bolding the sentence to make sure lawmakers took notice. They warned: “This is a tinderbox that cannot be ignored.”

President Donald Trump may believe that detaining undocumented immigrants somehow keeps us safe. But coronavirus does not respect the walls of detention centers. The virus does not quake before badges and uniforms, nor does it spare the “good people” outside the gates.

Letting most detainees return to their families will lessen the spread of the virus. These detainees will not go anywhere — not only because they will likely have ankle bracelets tracking their every move but also because they are scared out of their wits. They will keep to home and hearth, and obey every single rule to keep their loved ones safe as well.

This policy would not only be humane, the doctors said it would likely help avert hospital overload, which occurs when a “large cohort of people” get sick at the same time.

Stick with ICE centers as they are, and inevitably there will be seriously ill detainees who will need hospital care, the physicians predict. Since these centers are often located in rural areas, the local community hospitals won’t be equipped to handle the surge. These hospitals may have very few ventilators. What if “five, ten or more” detainees get sick “over a very short period” and must be put on ventilators, the doctors ask. What happens then when someone in the community falls seriously ill with COVID-19 or any of a myriad of other illnesses?

There is one unthinkable alternative, and it’s scary even to consider. ICE could just let inmates sicken and die in confinement. But if that’s what this country has come to, then this pandemic already has destroyed us.