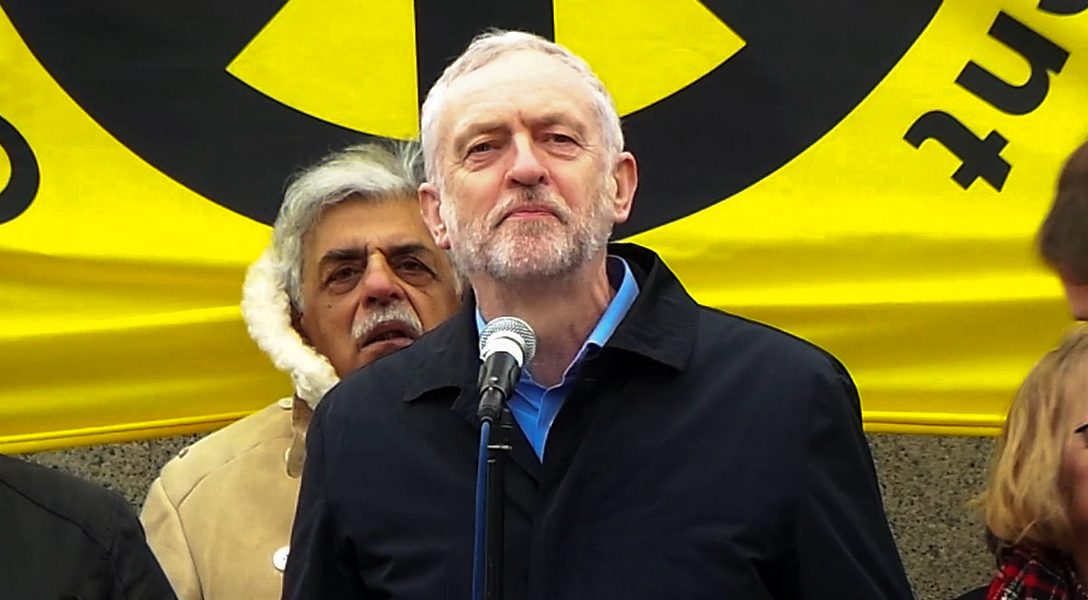 Yes He Can? Far-left Populist Surges in UK Polls

The UK’s elections will go ahead on June 8 despite a terrorist rampage in the heart of London on Saturday night. The attack followed upon a May 22 suicide bombing at a Manchester concert that killed 22 people.

Even if most UK polls still project a Conservative victory, they do so by a shrinking margin. One poll even suggests there could be a “hung parliament” — an outcome in which no party has a majority, giving Corbyn a chance at becoming prime minister of a coalition government.

Whether or not he can pull off an unprecedented upset, Corbyn has saved the Labour party from being wiped off the map.

When Conservative Prime Minister Theresa May called for a snap election in April, her party was polling 22 points ahead of Labour. Britain was beginning to resemble a “one-party state,” such was the dominance of the Conservative Party and the perceived weakness of the opposition parties.

Corbyn, a 68-year-old socialist peacenik, has been one of his party’s most contested leaders. Three-quarters of Labour’s Members of Parliament signed a motion of no confidence in him last year.

But polls show Corbyn’s “positivity” rating soaring from -19 to +22 in a single month. Now 57% of voters like or really like him.

“Corbyn has shown that Labour is electable,” says Corbyn biographer Richard Seymour, “even if the odds are still stacked against it.” It is no longer impossible to imagine Jeremy Corbyn leading Labour to victory. Here are the five big reasons why:

1 – The UK is Tired of Austerity

Corbyn has seized on the snap election to push for a reversal of economic austerity in the UK.

Austerity is widely blamed for choking off economic recovery in the world’s fifth-biggest economy. Since the 2008 financial crisis, UK wages have fallen 10% — more than anywhere else in Europe except Greece. It has also created deeper inequality and chronic underinvestment in infrastructure and public services.

Under Corbyn, the Labour party has come up with an election manifesto (“For the Many, Not the Few”) that represents a complete break with the neoliberal economics of the Conservatives and of moderate Labour leaders like Tony Blair. It promises to tax the rich in order to fund public services. It calls for nationalizing private companies that do a lousy job delivering vital services, like rail transport and utilities. Some banks might be nationalized. Universities would be free.

“Corbynomics” — it’s now a word in the English language — has gained credibility among some economists. An open letter signed by dozens of economists, including David Blanchflower, formerly of the Bank of England, explains that Corbyn’s “…opposition to austerity is actually mainstream economics, even backed by the conservative IMF. He aims to boost growth and prosperity.”

One of Corbyn’s core messages is that the UK cannot continue down the path of ever greater social inequality forever. “I am…impressed by his willingness to talk about class issues,” said Bernie Sanders on a UK speaking tour last week. “Too many people run away from the grotesque levels of income and wealth inequality that exist in the United States, the UK and all over the world.”

Win or lose, Corbyn has created an epic sense of the possible. Like the Berlin Wall falling in ppl's brains. It's this or Trump…

The prime minister’s election strategy has lurched from one misstep to the next.

Much of May’s campaign has consisted of talking about herself in contrast to Corbyn. Her negative attacks became even more direct and personal in the wake of the May 22 Manchester bombing. However, contrary to widespread assumptions, the terrorist attack did not shift election dynamics in May’s favor. It remains to be seen if the London attack will have a different effect. May faces mounting criticism and calls for her resignation over police cuts she made as Home Secretary.

May’s manifesto, in stark contrast to Labour’s, did irreparable damage to her political “brand.” It included a so-called “dementia tax” — which she later abandoned — that would force people requiring long-term care to pay for it with the equity in their homes (anything over £100,000) after their death.

An analysis by the Institute for Fiscal Studies says the Conservative manifesto would lead to another five years of austerity with large cuts to welfare, schools and services. It would, for example, scrap free school lunches for almost a million young children. Its social-care plans are described as “a catastrophically bad way to make policy.”

Some members of May’s own party are now turning against her. As one Conservative candidate put it, ‘Theresa May has totally f*cked it up.’

Arguably no one in the UK has suffered more from disinformation campaigns in the press than Jeremy Corbyn.

After analyzing 500 stories from eight national newspapers, the Media Reform Coalition concluded that Jeremy Corbyn was “systematically undermined” by media bias in his first week as Labour leader.

Newspapers like The Sun and Daily Mail have accused him of being a supporter of armed struggle with “blood on his hands.”  The Sunday Telegraph has reviled him as an anti-Semite and claimed his economic proposals would “turn Britain into Zimbabwe.”

The allegations of anti-Semitism against Corbyn were refuted in this Open Democracy article with the comment: “the chasm between the evidence and the sweeping condemnations which have appeared in the press is truly vast.”

David #Dimbleby: Jeremy #Corbyn isn't treated fairly by the press despite having lots of support in the country#BBChttps://t.co/3shdbnm93p pic.twitter.com/SAg4jmjnvU

But media bias against Corbyn now seems to have actually backfired. His newfound popularity partly coincides with the imposition (on May 3) of UK’s general election broadcast rules, which require “adequate” and “objective” coverage.

In countless television interviews and appearances, Corbyn has come across as an honest person rather than a bogeyman, one who is sticking to his beliefs, whether or not you agree with them. In the face of personal attacks, he refuses to retaliate.

Even though there has been no face-to-face debate with May, he has effectively trounced the prime minister on air. By contrast, May’s refusal to participate in a debate with her Labour rival has worked against her, leading to headlines saying she’s “panicky” and “running scared” from Corbyn.

Some of her media performances have been dire. In one notably awkward exchange on live television, May, whose husband runs a trillion-dollar investment fund, told a public hospital nurse that she hasn’t had a raise for eight years because “there’s no magic money tree.”

4 – Brexit Is Not the Main Battleground

This election was meant to be all about Brexit, the UK’s exit from the European Union, but the prime minister has failed spectacularly to make it the main issue.

After repeatedly promising not to do so, May called an early election less than halfway through her government’s five-year term to avoid “political game-playing” in the face of complex and excruciating Brexit negotiations. Photo credit:  Adapted by WhoWhatWhy from frankieleon / Flickr (CC BY 2.0)

Since then her campaign has been stunningly personal. She’s the self-described tough negotiator who will be a “bloody difficult woman” when it comes to fighting for the best deal. She also promises to “walk away” if need be because “no deal is better than a bad deal,” though experts predict it would be the “worst-case scenario” for the UK economy.

Corbyn, she warns, would go “alone and naked” into negotiations with the European Union.

While Corbyn and his Labour party claim to have embraced Brexit, they’ve continually refocused the campaign on other issues, like their promises to more equitably redistribute Britain’s wealth, save the National Health Care system, protect pensions, put more police on the streets and eliminate university tuition fees, which have trebled since 2012.

Ironically, by refusing to fight on the Brexit battleground, Corbyn has positioned himself as the candidate who “offers hope” for Britain’s post-Brexit future.

Among 18- to 24-year-olds who say they are registered and plan to vote, nearly 70% support Labour. If it were up to only the under-50s, Jeremy Corbyn would win, says one pollster.

The challenge for Labour is that the outcome of this election, which Prime Minister May calls “the most important of my lifetime,” could well be decided by people over 50, most of whom will be voting for her. Despite a disastrous campaign, the Conservative Party is still counting on a firewall of oldies. “Like Brexit, this is a hugely generational election,” says Andrew Harrop, head of the Fabian Society, a Labour-affiliated think-tank.

“We now have a more generational divide in our politics than we’ve ever seen before.”

Labour supporters are privately worried that the surge in support among young people will only add to the pile of votes in safe Labour seats and safe Tory seats rather than in the marginal constituencies — battleground seats — that will decide the election.

“Even if all these young people do vote it might not have a huge impact on the number of seats Labour wins just because of the distribution and where they live,“ Harrop told WhoWhatWhy.

The UK election was meant to be the most boring of modern times. Now the world is on the edge of its seat. What if the UK’s young voters should decide the outcome?

Or will old and rural voters — who pushed the UK into Brexit and elected Donald Trump — continue to set the agenda?