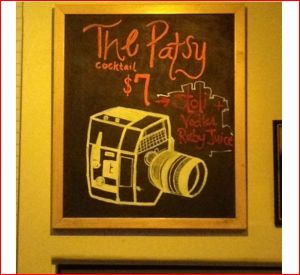 A cocktail on sale November 22, 2013, on the 50th anniversary of JFK’s assassination, at the still-functioning Texas Theater, where Lee Harvey Oswald was captured back in 1963: The Patsy. Featuring Russian vodka and “Ruby juice.” Only in Texas! Another fog-shrouded libation was available around the 49th anniversary, in 2012, at the Adolphus Hotel’s Rodeo Bar, just blocks from Dealey Plaza. The bar was advertising a drink special called “Death”, ingredients described as “½ rum, ½ vodka, ½ gin, ¼ triple sec.”

Like a lot of things that have gone down in Dallas, something just doesn’t add up.