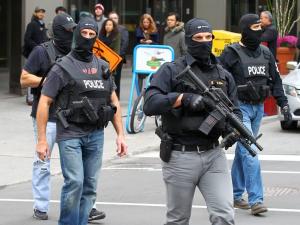 Ottawa lockdown after Parliament shooting on Oct. 22. Courtesy The Independent

In a bygone, saner era, Michael Zehaf-Bibeau’s murder of Canadian soldier Nathan Cirillo and subsequent shooting rampage inside the Parliament would have been treated as a drug-related murder. Not so in the age of terrorism.

Instead, the authorities used the long-time crack addict and Muslim’s actions to whip up hysteria, framing the events of Oct. 22 as excuses for expansion of the security state. Will Prime Minister Stephen Harper lead Canada down the same road the George W. Bush led America?

The center of Ottawa was locked down for several hours until evening, when Prime Minister Stephen Harper told the Canadian nation it was a terrorist act, “a grim reminder that Canada is not immune to the types of terrorist attacks we have seen elsewhere around the world.” [ii] Ottawa police spokesman Chuck Benoit told the media that two or three gunmen were believed to be involved in the attacks. [iii]

First news reports, citing official sources, also said that “Zehaf-Bibeau … has been on the terrorist watch list … and could be an ISIS jihadi.” [iv] A dramatic photo of him, with a long-barreled gun and semi-masked with a scarf, like an outlaw in a Hollywood Western, was also reproduced widely in the media and on the Internet. [v]

The alleged source of the photo, a Twitter account, was used to link Zehaf to another Muslim murderer, Martin Couture-Rouleau, who two days earlier had killed a Canadian soldier and injured another in St-Jean-sur-Richelieu, Quebec. (It was alleged that Couture-Rouleau followed the same Canadian-based pro-ISIS Twitter account.) [vi] CNN reported, from a “U.S. source,” that “Zehaf-Bibeau has ‘connections’ online with jihadists.”[vii] Within 24 hours, a very different picture emerged, creating conflicting stories about the Royal Canadian Mounted Police’s prior knowledge of Zehaf-Bibeau that deserve a deeper investigation. The RCMP soon stated for the record that Zehaf, although a Muslim, “was not one of the 90 radicalized Canadians on an RCMP watchlist.” [viii]  According to RCMP Commissioner Bob Paulson, Zehaf had come to Ottawa on Oct. 2 to deal with a stalled passport application:

“When the RCMP were asked to review his passport application, they found no evidence he posed a threat to national security,” Paulson said. [ix] The commissioner claimed that Zehaf wanted to go to Syria. However, a witness who had saw Zehaf in the hostel where he had been staying said the suspect’s travel plans were for Libya (the land of his immigrant father) and not Syria. [x]

Other records suggested that Zehaf’s actions may have been driven more by his psychology than his politics. “Three years earlier, as part of a psychiatric evaluation prior to a trial in Vancouver, Zehaf-Bibeau said “he wants to be in jail as he believes this is the only way he can overcome his addiction to crack cocaine,” according to a psychiatric assessment provided by a Canadian court.” [xi]

The fears that Zehaf was an ISIS-linked terrorist now seem to have had little foundation. (Police have since alleged that Zehaf-Bibeau made a video of himself beforehand, saying he was motivated by his religious opposition to Canadian foreign policy. But this video has not been released to the public). [xii]

As a Canadian Muslim leader has observed: “Why can’t Muslims have insane individuals? When these actions are done by others, they say he is insane . . . Why, as a Muslim Canadian, do we always say right away it was a terrorist act?” [xiii]

The murder two days earlier of another Canadian soldier by Couture-Rouleau, who allegedly was on the 90-person watchlist, helps explain why terrorism was on the minds of Canadian authorities as well as the public. Another reason was that the RCMP and Canadian Security Intelligence Service had been conducting a war game to deal with just such an attack.

According to the CBC on October 23:

Within the last month we know that the CSIS, the RCMP and the National Security Task Force … ran a scenario that’s akin to a war games exercise if you will, where they actually imagined literally an attack in Quebec, followed by an attack in another city, followed by a tip that that ‘hey some foreign fighters are coming back from Syria.’ So they were imagining a worst case scenario. We’re seeing elements of that happening right now. … [Canadian authorities] may talk today in terms of being surprised but we know that this precise scenario has been keeping them up at night for a while. [xiv] Yet Another Coincidental War Game

But the presence of a concurrent counterterrorist exercise, or war game, forces us to think more closely about the shootings in Quebec and Ottawa on October 20 and 22. The coincidence, if it was that, calls to mind others in recent history.

One of the explored dimensions of the 9/11 attacks is the acknowledged existence on that same day of simultaneous war games—including a simulated attack on the National Reconnaissance Office headquarters in Chantilly, VA, “as part of a ‘plane into building’ drill.” [xv]

The London subway bombings five years later were also said to have coincided with a war game with an uncannily similar scenario. [xvi] There is even a disputed allegation that the Boston Marathon bombings of April 2013 were in the context of a planned “controlled explosion” (to quote a Boston Globe tweet of that day) “as part of bomb squad activities.”[xvii]

It is certain that there were war games on 9/11: one of them, Vigilant Guardian, is even acknowledged in a footnote of the 9/11 Commission Report (p. 458, note 116). And it is relevant that 9/11 was used by the Bush administration to introduce drastic changes in both foreign policy (the wars against Afghanistan and eventually Iraq) and also homeland security (warrantless surveillance, warrantless detention, and the militarization of domestic law enforcement).

Time after time, the perception of a terrorist threat is exploited by those in power to consolidate public opinion behind them and to further increase counterterrorist budgets. Stephen Harper promised that same evening that Zehaf’s attack would lead the government to “redouble our efforts and those of our national security agencies to take all necessary steps to identify and counter threats and keep Canada safe here at home.” [xviii]

For a decade, and as recently as last August, the North American press has carried numerous accounts of domestic terrorist plots thwarted by the FBI. But in 2012 David Shipler of the New York Times dismissed many such headlines, saying that they in fact reported “dramas . . . facilitated by the F.B.I., whose undercover agents and informers posed as terrorists offering a dummy missile, fake C-4 explosives, a disarmed suicide vest and rudimentary training.” [xix]

At present there are no grounds to allege that the RCMP or one of its informants provided Zehaf with his weapon or encouraged him to use it. But the Canadian government has admitted it contributed to his derangement by refusing to grant him his passport, a decision about which the Canadian parliament should learn more. [xx]

If Zehaf was too dangerous to be granted a passport, why was he not on a RCMP watchlist or under surveillance? Reuters has since reported that (despite the RCMP’s denial) “A U.S. government source told Reuters that he was regarded as a threat by Canadian authorities.” [xxi]

His freedom from surveillance thus recalls the anomaly that Lee Harvey Oswald, President Kennedy’s alleged assassin, was removed from an FBI watchlist in October 1963, six weeks before the president’s murder, even though Oswald had been arrested in August, and one month later reportedly met a suspected KGB officer in Mexico. [xxii]

For eighteen months before 9/11 NSA and CIA information about two of the alleged 9/11 hijackers (Khalid al-Mihdhar and Nawaf al-Hazmi) was systematically withheld from the FBI, preventing their surveillance. [xxiii]

And in the wake of the Boston bombings it was learned that one of the alleged bombers, Tamerlan Tsarnaev, despite months of conspicuous and provocative extremist behavior, had allegedly not come under FBI surveillance. [xxiv] Were all these people left free precisely to allow them to become what I have called “designated culprits”?

Since 9/11 all of us, but especially Muslims, have come under radically increased surveillance. And both Canada and the United States have moved towards radically intensified and militarized homeland security, creating military commands for the North American continent that work closely together.

A symptom of this intensification was the lockdown in Ottawa that mirrored the lockdown in Boston, where, in the days after the Marathon bombing, thousands of National Guard troops, along with Blackhawk helicopters, helped state and local police keep a million people in their homes—all to help track down the one surviving Tsarnaev brother who had escaped on foot from a hijacked car.

America has succumbed to fits of hysteria in the past—the Palmer raids in 1919, and the era of McCarthyism in the 1950s. Until now Canada has been relatively free from such bouts of hysteria, but Prime Minister Harper, from Canada’s most Americanized city, Calgary, seems determined to change that.

ii Johnlee Varghese, “Dead Ottawa Shooting Suspect Michael Zehaf-Bibeau was on Terror Watch List,” International Business Times, October 23, 2014., http://www.ibtimes.co.in/isis-jihadi-dead-ottawa-shooting-suspect-michael-zehaf-bibeau-was-terror-watch-list-612083: “There are also reports emerging that Zehaf-Bibeau and Couture-Rouleau were in communication with each other..”

ix Saeed Ahmed and Greg Botelho, “Who is Michael Zehaf-Bibeau, the man behind the deadly Ottawa attack?”

http://www.cnn.com/2014/10/22/world/canada-shooter/: “The 2011 assessment continues, “He has been a devoted Muslim for seven years and he believes he must spend time in jail as a sacrifice to pay for his mistakes in the past.”

“Agency planned exercise on Sept. 11 built around a plane crashing into a building,” AP, August 21, 2002, http://911research.wtc7.net/cache/planes/defense/sfgate_exercise_082102.html: “In what the government describes as a bizarre coincidence, one U.S. intelligence agency was planning an exercise last Sept. 11 in which an errant aircraft would crash into one of its buildings. But the cause wasn’t terrorism — it was to be a simulated accident.

“Officials at the Chantilly, Va.-based National Reconnaissance Office had scheduled an exercise that morning in which a small corporate jet would crash into one of the four towers at the agency’s headquarters building after experiencing a mechanical failure.”

xiv “The 7/7 London Bombings: How to Set Up a Patsy, What Really Happened,” http://whatreallyhappened.com/WRHARTICLES/london_exercise_video.html

https://www.metabunk.org/threads/debunked-natural-news-boston-controlled-explosion-exercise.1395/. This source reproduces the Boston Globe tweet. What it debunks is a claim that the tweet referred to an actual explosion at the JFK Library not far away. It confirms that the tweet refers to the Boston Public Library on the Marathon route, close to where the Marathon bomb exploded.

xviii RCMP commissioner Paulson “said Zehaf-Bibeau had applied for a passport to travel and wanted to go to Syria, but the passport application was delayed, which likely helped motivate the attack” (Reuters, October 23, 2014, http://www.reuters.com/article/2014/10/24/us-canada-attacks-profile-idUSKCN0IC2GW20141024).