For Wilton Newton of Clemson, SC, last year’s United States Postal Service late mail delivery was more than just an inconvenience. It was a major concern.

After open heart surgery last November, Newton ordered medication from CVS Caremark. In the past, delivery usually came within three days. This time, he waited 11 days.

“I had a pain in my chest after not having it for two or three days, and that sort of had me worried there for a while,” he told local television station WYFF 4. What bothered him the most, he said, is that his pills sat around in a local US Postal Service delivery waypoint, untouched and unmoving, for eight days.

Newton’s crisis was repeated all over the country. Small businesses suffered logistics breakdowns; vital documents went undelivered, mortgage payments were late, and voters who chose to send their ballots by mail worried their votes might not count.

But while the United States Postal Service’s delivery times have recovered from the Trump-era nadir of late 2020 and early 2021, Trump’s much-maligned postmaster general, Louis DeJoy, the CEO of a logistics company that still holds contracts with the Postal Service, is still in power — and is planning on making slow and unreliable mail delivery a permanent fixture.

Recent revelations about DeJoy’s additional conflicts of interest have fueled an increased sense of urgency to remove him as postmaster, and efforts to move President Joe Biden on this issue have intensified.

But so far, the president has taken the slowest path of least resistance toward curbing DeJoy.

With the Postal Service billions of dollars in the red and on track to lose almost $9 billion in 2021, in March DeJoy announced a series of cost-cutting measures that critics say will have a drastic impact on the mail’s speed and efficiency.

In addition to closing “low traffic” post offices and cutting opening hours elsewhere, DeJoy proposed raising postal rates and slowing the time for standard delivery from three days to six days — in part because packages, like high-volume deliveries from Amazon, would be transported by truck rather than by plane.

Instead of fixing the financial woes, the sum effect of this will be to drive even more customers away from the US Postal Service, critics say.

“So, the excuse is that they are going to cut costs, but the thing is that [when] all of this is done, there is going to be a reduction in services; and it is going to mean that a lot of different kinds of clients, a lot of people that use the mail, are going to switch to other services,” she added.

Some on the right are just fine with that — leading progressives to wonder if further weakening the Postal Service wasn’t the plan all along.

Conservatives have long welcomed the end of the Postal Service’s monopoly on delivering first class mail, and allowing mail delivery in the US to be privatized, as it has been in Germany and the United Kingdom.

They argue that many postal branches servicing few customers should be shuttered and that keeping them open is an unsound business practice that only contributes to the Postal Service’s $87 billion worth of deficits over the last 14 fiscal years.

“The robust market for package delivery in America and mail delivery in other countries shows that the private sector is fully capable of providing the service,” as David Ditch, a researcher for the Heritage Foundation, a prominent conservative think tank, told the Philadelphia Inquirer.

Other conservative think tanks, like the Cato Institute, argue in favor of full privatization of mail delivery.

Indeed, some believe the intent of DeJoy’s 10-year plan is to make the service so dysfunctional that it will lead to privatization — which, according to polling, is vastly unpopular among Americans of all political affiliations.

“Privatization is a long-standing goal of conservative think tanks and corporations that stand to gain from weakening or dismantling the Postal Service,” the Economic Policy Institute wrote in 2020.

Congressional Democrats have tried to rescue the Postal Service from penury — and, at least in Congress, Republicans have helped.

In February 2020, the House voted to end a burdensome 2006 requirement that forced the Postal Service to pre-fund retiree benefits 75 years in advance — forcing it to find $110 billion, for people who might never work for the agency, and leading it to default on recent payments.

The repeal of this mandate even had the support of DeJoy and is expected to clear the Senate and be signed into law.

But there is a question of whether the repeal would be enough to make the Postal Service solvent. Some postal unions claim it would; current postal management maintains further cuts are necessary.

Still, wholesale privatization of the service does not seem to be in the immediate future. Instead, mail service would be slowly outsourced — perhaps to companies like DeJoy’s old firm.

DeJoy serves at the pleasure of a nine-person Postal Service Board of Governors. When Congress approved Biden’s three nominees for the board in May, expectations were raised that conservative-favored service reductions and eventual privatization would be slowed — and that the Board of Governors would fire DeJoy.

The three new appointees — Anton Hajjar, former general counsel with the American Postal Workers Union; Ron Strohman, a former deputy postal commissioner; and Amber McReynolds, who leads the National Vote at Home Institute — were all seen as a check on DeJoy’s plans to contract out basic services.

In an August Board of Governors meeting, Biden’s three new nominees expressed their opposition to DeJoy’s 10-year plan.

It was also clear at this meeting that their criticism did not deter DeJoy and he was still in charge.

One reason why is that Ron Bloom, the Trump-appointed Democratic chairman of the Board of Governors, is supportive of DeJoy’s policies.

“He’s earned my support and he will have it until he doesn’t. And I have no particular reason to believe he will lose it,” Bloom recently said, according to The Washington Post.

Critics cite a potential conflict of interest between DeJoy’s purchase of over $300,000 worth of bonds in the investment firm Brookfield Asset Management. Bloom is the managing partner for that firm. Both men deny any impropriety or conflicts of interest.

DeJoy seems likely to remain in part because the Board currently consists of four Republicans, four Democrats, and one independent, many of whom come “from management backgrounds of various settings,” according to Ohio State University law professor Peter Shane.

“They may see DeJoy’s plan in a less jaundiced light than do many consumers,” Shane said.

There are options for removing DeJoy or curbing his influence, but Biden firing DeJoy is not on the table. Only a majority of the Postal Service Board of Governors can do that, and federal law prohibits the president from firing the postmaster general.

DeJoy could be impeached by Congress, but that would require the approval of two-thirds of the Senate, very unlikely given that Republicans hold 50 seats.

Biden does have the power to remove members of the Board of Governors for “just cause.”

Earlier this year, Rep. Bill Pascrell (D-NJ) urged Biden to do just that, arguing members were derelict in their duties by allowing DeJoy to sabotage the Postal Service.

As of yet, the Biden administration has not addressed Pascrell’s request. Nor has the White House said anything publicly on the matter. 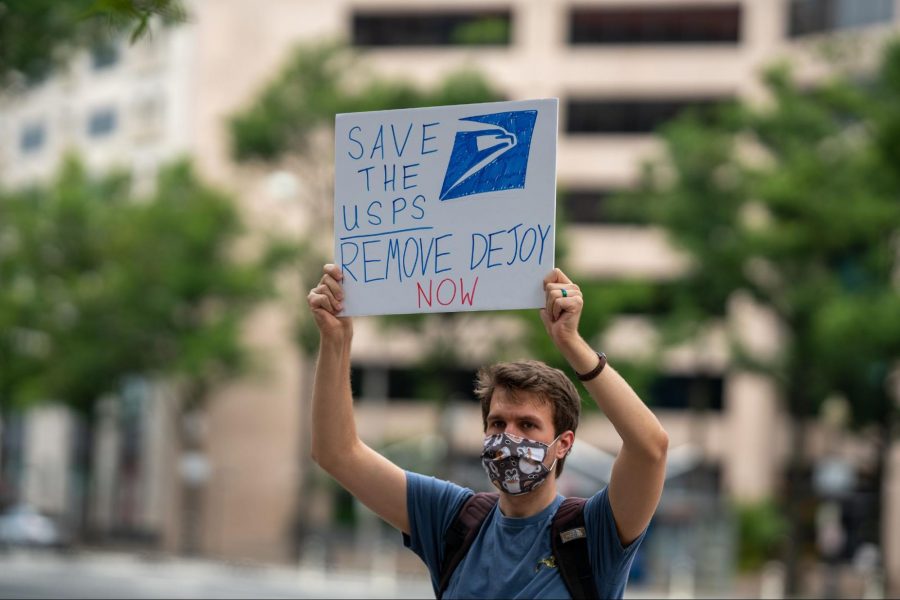 But, like proposals to stack the US Supreme Court to offset its conservative tilt, that approach could backfire over the long term. Should Trump or another hard-right Republican like Florida Gov. Ron DeSantis win election in 2024, they could use a Biden sweep of postal regulators as a precedent to fire pro-regulation members of the Federal Reserve Board, Federal Trade Commission, and Federal Communications Commission.

However, the term of one Republican board member, John Barger, expires this year. And Bloom’s extended term ends January 1. Biden’s replacements for those two vacancies may well be the most likely route to tipping the balance of power against DeJoy.

“[Biden] is obviously an institutionalist in some strong sense,” observed Shane. “He did not get to where he is in life without having a strong allegiance to institutional norms.”

Shane did not rule out Biden taking action against board members if he were persuaded they were negligent.

He posed the following rhetorical question: “If Donald Trump … is reelected in 2024, does any person think that institutional restraint shown by Joe Biden would curb any of Trump’s norm-breaking instincts?”

In the Biden campaign’s response to a questionnaire by the National Association of Postal Supervisors, Biden’s only concrete commitment to address the Trump-era decimation of the Postal Service was to nominate new members to the Board of Governors as positions became vacant.

So far there have been no public statements by Biden that would indicate he will take more aggressive steps such as not waiting for board vacancies to open up to tip the balance against DeJoy.

But patience may be wearing thin. In August, Pascrell renewed his call to fire all the Postal Service board members. This spring, 50 Congress members endorsed Pascrell’s efforts to get Biden to fire the entire current Board of Governors, in addition to filling the three vacant positions.

Whether that increasing pressure will be enough to overcome Biden’s allegiance to institutional norms at this point remains an open question.

“I don’t doubt that if the president is persuaded that DeJoy is intentionally or neglectfully himself subverting the basic functions of the Postal Service, and there are members of the Board of Governors who are neglecting to hold him to account, I can imagine composing the letter that would result in the discharge of such a governor for neglect,” Shane said.