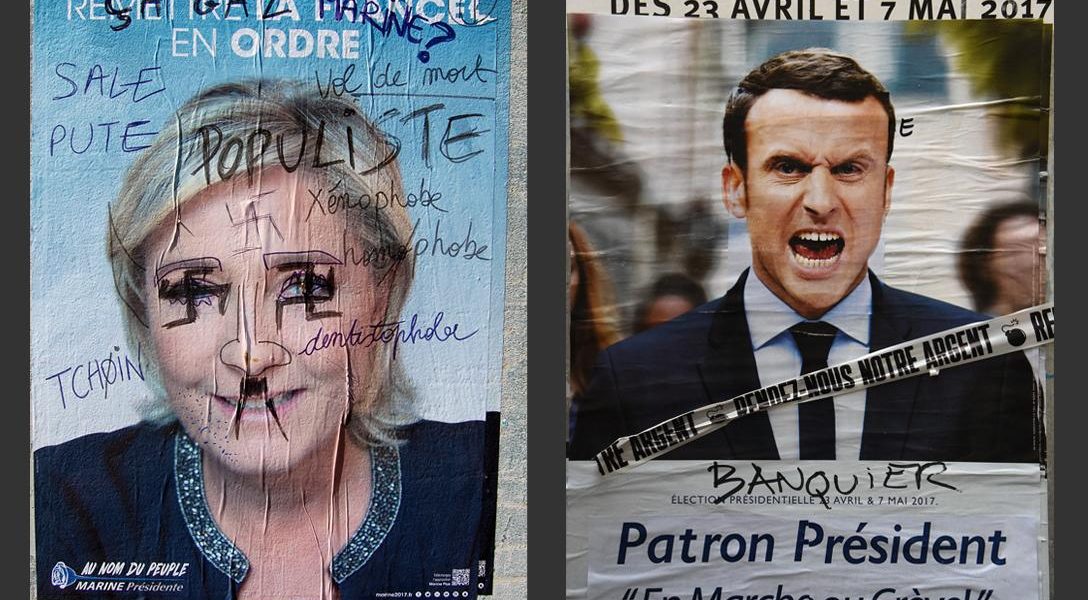 The far right in France has never been closer to power than now, leading into this Sunday’s elections.

With the very existence of the European Union in question, the stakes could not be higher. Can Marine Le Pen, the “French Donald Trump,” win?

French polls say the answer is no.

Emmanuel Macron, a passionately pro-Europe independent, is forecast to win by 18 to 22 percent in the second and final round of voting.

In the wake of the UK vote to scrap the European Union (Brexit) and the upset victory of Donald Trump, the US and UK media have pushed a “yes-she-can” narrative — despite the probability that she can’t.

Anyone who says "Le Pen can win because Trump!" is basically innumerate. Their situations are not at all comparable.

But that hardly seems to matter across the Atlantic. Ian Bremmer of Eurasia Group still gives Le Pen a 40% chance of winning: “It is almost a coin flip.”

Meanwhile, conservative New York Times columnist Ross Douthat is exploring the “case” for Le Pen and making the bizarre claim that “nobody seriously doubts Le Pen’s competence, her command of policy, her ability to serve as president…”

Like Trump, Marine Le Pen knows how to play the media. She has had considerable success in rebranding the extremist National Front as a “normal” political party (even expelling its anti-Semitic founder, her father).

The twice-divorced mother of three “…has spun gold from voter exasperation, mixing charm and ambition to rack up wins….,” gushed Time magazine in 2015.

But she has essentially the same ideas as her father. Beneath the veneer of a France-first economic program lies an agenda of religious and racial discrimination and mass deportation.

Ross Douthat might consider a visit to the National Front headquarters just outside of Paris to discuss Le Pen’s presidential qualifications with the neo-fascist sympathizers who advise her.

When Le Pen stepped aside temporarily from the presidency of the Front National party in the last days of her campaign, she appointed one of them, Jean-François Jalkh, to replace her. Jalkh was forced to resign after news reports revealed he has a long history of questioning the existence of Nazis gas chambers in the Holocaust (“impossible, I mean impossible, to use it [Zyklon B gas] from a technical point of view … in mass exterminations”). Macron and Le Pen faced off Wednesday in a brutal head-to-head TV debate that rivaled the Trump-Clinton clashes for mutual dislike and sheer nastiness. The verdict of a snap TV poll found Macron more convincing by a 2 to 1 margin.

Moderators lost control more often than not. The discussion of unemployment, for example, morphed into a debate on surrogate motherhood.

Le Pen called Macron “the candidate of savage globalization, ‘uberization,’ precariousness and social Darwinism.” She also said he is “a servant of Germany.”

“People may call me old fashioned,” she added, “because I like France as it is with its culture and its language.” Macron and Le Pen also debated whether France bears responsibility for the round-up of Jews during WWII. Le Pen said recently that it does not.

Macron argued that France must remain an “open and generous country” and said a Le Pen presidency would be “an exit from history.”

The Macron-Le Pen face-off is not expected to change many minds. A survey found that a lot of French voters don’t believe that either Le Pen or Macron can solve major issues like reducing unemployment (45%), unifying the French (43%) or even obtaining a parliamentary majority in upcoming legislative elections in June.

Despite this pessimism, second-round turnout is currently projected at 73%. French polls have been dead-on except for underestimating first-round turnout, which, at 78%, was 10% higher than some estimates.

No French poll projects voter turnout sinking to America’s state of passivity, where only 55% of eligible voters participated in the last election and a mere 27% of them propelled Trump into the world’s most powerful office.

The “can Le Pen win?” headline meme has missed the full story of the first round of French elections.

A shocking 52% of the electorate not only voted outside the mainstream — on the far left, far right and fringe — but for candidates that are anti-establishment, anti-globalization and anti-European Union. Radical left leader Jean-Luc Mélenchon came within striking distance of a final head-to-head with Le Pen.

For the first time in the history of France’s Fifth Republic, both main political parties, the Socialists and center-right Republicans, were eliminated in the first round. It’s not clear if either party will survive.

Macron, the first round winner with 24.0%, is essentially partyless, having launched the En Marche! (Onward!) movement only a year ago.

What will happen in the second and decisive round of voting on May 7?

Fillon and Hamon have called on their supporters to vote for Macron, just as Bernie Sanders supporters were told to hold their noses and vote for Hillary. It is a French political tradition to form a united “Republican Front” against the far-right in second-round elections.

In theory, everyone who is not far-right should now support Macron: trade unionists, students, communists, ecologists, Trotskyites, etc. The reality this time around is different.

Mélenchon, whose movement is called France Insoumise (“Unbowed”), has resisted endorsing Macron. After waiting a couple of days, he did go on TV to warn his voters to “not make the terrible mistake of putting a vote for the National Front into the ballot box.”

Voters on the Left are reluctant to switch to Macron, a former investment banker who is studiously ambiguous on many issues.

Some are now registering their grief and nausea in clickable headline quotes on a website launched by French daily Libération.

“Even if I execrate his neoliberalism, Macron is progressive,” comments Nora, who is “disgusted but not suicidal.”

“The things that irritate me about Macron are nothing compared to Le Pen. Her election would disembowel and kill me,” writes Agnès, who voted for Socialist candidate Benoît Hamon in the first round.

How Many Voters Will Abstain?

Le Pen’s path to victory depends on winning over conservative Fillon voters and convincing left-wing Mélenchon voters to either side with her because, like him, she opposes the EU and NATO, or abstain.

Or to vote blanc (“white”). In France, voting blanc — placing an envelope with an unmarked ballot, or just an empty envelope, in the ballot box — is a popular form of protest. By law, the blanc votes are tallied separately.

A lot of Mélenchon supporters identify as Ni Macron Ni Marine, or simply ni-ni (“neither-nor”), meaning they are against both finalists.

A quarter million of his first-round voters took part in an online survey with two-thirds of them saying they will abstain or vote blanc (one-third will choose Macron).

Likewise, the ultra-Catholic Sens Commun, a wing of the conservative party opposing gay marriage, is refusing to back Macron.

“It all depends on who they hate the most,” comments Nicolas Lebourg, a historian specializing in the far-right.

This was unveiled at a Pro-Trump party in Moscow on 11.8.16. Took Putin decades to prepare #TrumpRussia #Brexit & #FrenchElection. #Resist pic.twitter.com/WqMojEFthW

Could something unprecedented and cataclysmic still sweep Le Pen into office?

Russian hackers appear to have targeted Macron during the campaign and might reveal something shocking about him at the last minute. Le Pen is even more of a Russophile than Trump and her campaign is indebted to Russian banks.

“I hope we’re not about to learn that you have an offshore bank account in The Bahamas!” she said during their TV debate, forcing Macron to insist he doesn’t. Le Pen later admitted she has no proof for her allegation. In a statement released to the press on Thursday, Macron called it a “Fake-News” smear that his team has traced to an American alt-right website. He is suing Le Pen for defamation.

A large-scale terrorist attack — it could happen at any moment — is the far more ominous threat to the integrity of French politics. The French are voting for a president under a state of emergency.

A policeman was gunned down on the Champs-Elysees in a terror attack four days before voting began in the first round.

The shooting in Paris had no measurable impact on first-round poll results, contrary to Trump’s predictions:

Paris was an electoral disaster for Le Pen in the first-round vote. She only won 5% of votes in the City of Light, oscillating between 3% and 6% in 20 arrondissements.

The result runs counter to the theory, widespread in the media and among risk analysts like Bremmer, that more terrorist attacks could get Le Pen elected.

A majority of the French electorate doesn’t yet buy her campaign message that she will “protect” them (from terrorism, free trade, immigration, etc.).

In spite of having suffered from horrific acts of terrorism in the past 18 months — hundreds of people have died — French voters seem likely to reject Le Pen by a wide margin.

If Le Pen does reach 40% in the runoff, she will have added millions of votes to her first-round result, which is a massive achievement for her once-taboo National Front party. It would give her a solid boost ahead of legislative elections in June.

But she still won’t be president. Just because the US is now led by an authoritarian populist doesn’t mean France will be, too.