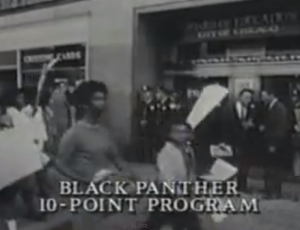 WHYTV – The FBI, Blacks, and Cointelpro Recently we ran an article, based on FBI documents, about snipers targeting leaders of the Occupy movement. Readers wanted more context on the FBI’s history with protest movements. Here, therefore, is a documentary on the FBI’s Cointelpro program aimed at black activists.

Generally , this is a fairly good film about the COINTELPRO relative to the black liberation movement. An attorney interviewed in the film who represented Fred Hampton’s family and other Black Panther survivors of the December 1969 attack by the Chicago Police on Hampton’s apartment, Jeffrey Haas, has recently written an excellent book about that case, entitled the Assassination of Fred Hampton. (His name was misspelled as “Hass” in the film.)

There is a trilogy of books published by South End Press that deal with COINTELPRO in much greater detail as it was also implemented against other groups seeking political and economic justice and greater power, such as the American Indian Movement, Puerto Rican Independence movement, New Left, etc. The titles and authors of these books are:

WAR AT HOME: Covert Action Against U.S. Activists and What We Can Do About It, by civil rights attorney and Fordham University Prof. of Law, Brian Glick

The COINTELPRO Papers: Documents from the FBI’s Secret Wars Against Dissent in the United States, by Ward Churchill and Jim Vander Wall

Agents of Repression, by Ward Churchill

In the film, Flint Taylor says that proof of the FBI being responsible for the assassination of Dr. Martin Luther King, Jr. may not be possible, but the FBI’s intent to destroy him is undeniable. Actually, a 1999 wrongful death civil trial in Memphis, Tennessee brought by the family of Dr. King vs. Loyd (sic) Jowers and other unnamed government defendants presented overwhelming evidence that the FBI, in connivance with military intelligence and the Memphis police, were in fact the true perpetrators of that horrific crime. James Earl Ray was an unknowing and unwitting patsy framed for a crime he had no involvement in. A black military intel operative named Marrell McCollough was a key planner and conspirator in the assassination, and was later employed by the CIA. Although many other participants in the conspiracy are probably dead, presumably Mr. McCollough could still be held accountable in a court of law for conspiracy to commit murder.

This story is important for all Americans to know about, and is told in the trial transcript of the 1999 trial that has been published in book form, entitled The 13th Juror, and also by the attorney, William Pepper, who represented the King family in the 1999 lawsuit in a book entitled, appropriately, An Act of State.

When current manifestations of the philosophy and tactics of the FBI’s infamous Cointelpro operations finally get coverage in the mainstream press it will be due to efforts by websites such as WhoWhatWhy.

Others such as CounterPunch and the Nation have also helped get the ball rolling, but major media outlets still won’t touch it – not even to dismiss it as tin-foil hat conspiracy theory; they just don’t talk about it at all.

It is not just blacks or “left” groups, by any means.
PATCON
FBI is an equal-opportunity violator of dissidents of all stripes.
There’s a docu on that, too.

You see, we’re all Injuns and niggers now, as Russel Means noted.

Thank you for shedding light on the covert actions the US government takes against activist groups.

Very good. Thanks so much for all of your work here!!

Powerful stuff, surprising in many respects. Pass it on.