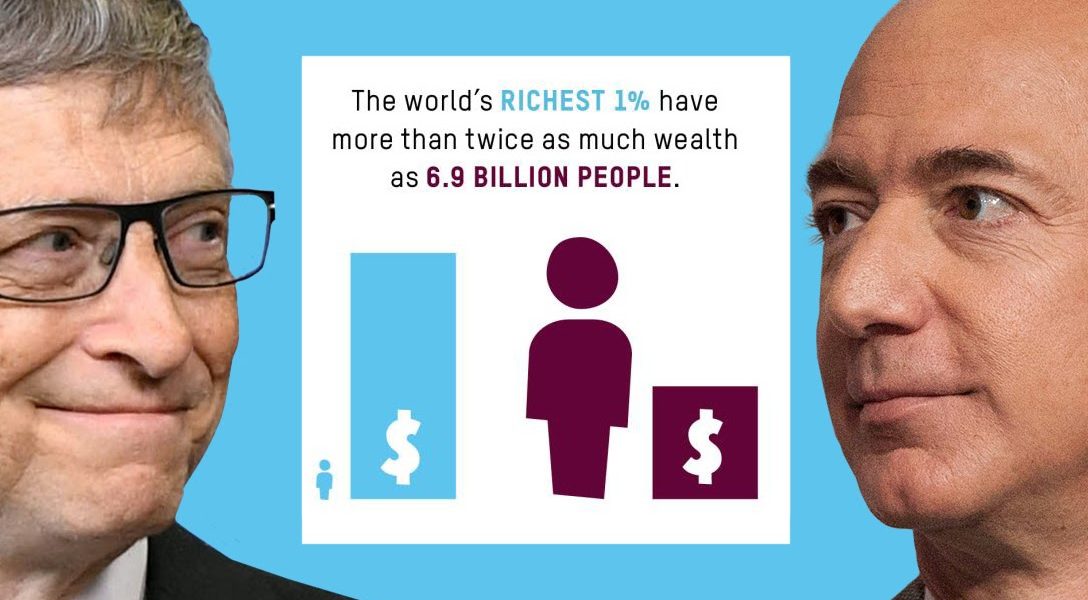 Who Owns the World? A Tiny Minority of White Male Fat Cats

A stunning new report on global inequality shows that the world’s 2,153 billionaires have now amassed more wealth than half the planet’s population.

The report, compiled by Oxfam International and released to coincide with the annual World Economic Forum in Davos, Switzerland, paints a grim picture of the global economy — at least for the billions of people who are not superrich. Nearly half the world’s population makes less than $5.50 a day. The gap between wealthy and poor continues to widen and appears to be on an unsustainable course.

Wealth stratification is on the agenda in Davos, where some of the world’s richest and most powerful are coming together to discuss how to build a fairer economy and provide the right conditions for individuals of all backgrounds to succeed.

Sen. Bernie Sanders (I-VT) used the report’s finding to issue a scathing indictment of those hoarding vast fortunes while billions of others are in need.

“We live in a world where a tiny handful of billionaires have extraordinary control over the economic and political life of the global community,” said Sanders, who has long made wealth stratification a cornerstone of his political career.

“Now, more than ever, our job is to bring people around the world together to develop an international movement that takes on the greed of the billionaire class and leads us to a world of economic, social, political and environmental justice.”

Connecting to environmental justice, the report also addressed how the extreme wealth gap intersects with climate change. As global warming gets worse, the populations most affected will be those least able to adapt. Extreme drought and rising sea levels have put over two billion people at risk of, among other things, living in areas without access to clean drinking water.

One of the most striking facts in the report is that the world’s richest 1 percent control more than twice as much wealth as the bottom 6.9 billion people. Holders of that extreme wealth are predominantly white and male, and  22 of the richest people control more wealth than all of the women in Africa. Exacerbating the problem is the fact that women, particularly those in developing economies, are often expected to provide work that is undervalued and often unpaid.

The report found that women in rural communities and low-income countries can spend up to 14 hours a day on unpaid care work. Which is more than five times what men typically do. It also found that 42 percent of women of working age are outside the paid labor force due to care work, compared to 6 percent of men.

Oxfam released a number of suggestions for how corporations and governments can help alleviate the problem. Some of the recommendations include challenging sexist beliefs and practices that help perpetuate economic and gender inequality.

Oxfam also suggests implementing wealth taxes, and raising existing taxes on higher incomes. The report found that one of the reasons wealth is more concentrated stems from a failure of countries  to tax the super-wealthy and large corporations. The funds could be invested in programs to help those in poorer areas. Investment in universal access to safe water and care for children, the elderly, and  people with disabilities will help narrow the gap between the very rich and the rest of the world.