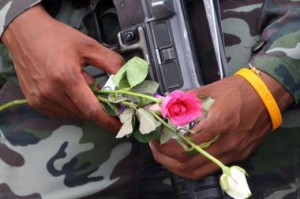 Who Do They Think We Are, Oxymorons? A Look At ‘Humanitarian’ War What is humanitarian war?

[ARTICLE SUMMARY: Every US intervention is sold as serving beneficent ends. The latest is allegedly for strictly “humanitarian” reasons. This essayist argues that there’s always another purpose—and the public is the last to learn the truth]

One of the greatest gifts of the War on Terrorism, everyone’s favorite war against an abstract concept, is the treasure trove of revisionist semantics we’ve received from Washington. We’ve learned that Homeland Security is best maintained by securing other peoples’ homelands abroad. We’ve learned, from the ‘Shock and Awe’ approach used in Iraq, that the most effective way to neutralize a Terrorist State is to Terrorize it into submission. But perhaps the most impressive hoodwinking on the semiotic front has been the naming of the overseas military operations themselves.

Finally, we had Operation Odyssey Dawn, which, as I understand it, was—is—a ‘journey’ to bring a ‘new day’ of freedom to Libya. Why an ‘Odyssey’? Because it takes place on the Mediterranean coast, of course. Certainly not because it will take 10 years to complete, and will be riddled with infinite setbacks and holdups, such as shipwrecks, cannibals, and six-headed monsters. At least we hope not.

What all these catchy titles have in common is that they imply that all the overseas military operations are driven, in some way or another, by altruistic motives. Indeed, Washington has pitched the intervention in Libya as the most expressly humanitarian post-9/11 effort to date. Some will argue that the action in Libya isn’t a part of the War on Terror at all, but is an altogether different, multilateral enforcement of a lifesaving No-Fly Zone (it’s a NATO affair called Operation Unified Protector now, of course). But is it really all that different?

An American-led war is taking place in yet another Islamic country under the thumb of an arch-villain who must be removed in the interest of world peace, the timetable is indefinite, and people are dying. Sure, NATO has carried out the majority of the strikes, but last time I checked, NATO (born as America’s team in the Cold War) is and always has been a largely American-directed and -funded affair, as Robert Gates complained earlier this month.

The point is, what’s happening in Libya is not merely, or even primarily, a ‘humanitarian’ effort. Can an expressly ‘humanitarian’ invasion truly exist? Isn’t a humanitarian invasion an oxymoron? There may be no active forces on the ground (that we know of), but it’s certainly an invasion of airspace, and therefore, of territorial sovereignty. Further, down there on the ground, people are dying.  No matter how you spin it, it’s definitely a war. While Washington’s specific geopolitical goals are anyone’s guess—oil, trade, regional influence, all of these?—is there any doubt that a main motivation of U.S. involvement in Libya is national (or, to risk using a loaded but descriptive term, imperial) self-interest?

But, you say, humanitarian war can exist. What about the Balkans? I would argue that the NATO interventions in Bosnia and Kosovo, while having humanitarian components, were essentially about clearing up some unfinished business from the Cold War. Genocide-prevention was clearly one objective, and probably a sincere one. However, the ‘90s redrawing of Balkan borders had a lot to do with fencing in a newly-weak Russia. Serbia is a Slavic nation, and has always had close ethnic and political ties to Russia. Serbian hegemony in the region would mean Russian hegemony. In other words, regional influence, as in the Middle East today, was undoubtedly central to Washington’s (imperial?) policy in the Balkans.

Personally, I don’t believe that a primarily ‘humanitarian’ war has ever existed, and in all likelihood, it probably never will. If such benign crusades do exist, why are we always so selective about them? Where were the invasions of Rwanda and Darfur?

If they don’t exist, maybe they should. But war is war, and we used to be more honest about it. Whatever happened to operation titles like Overlord, Masher, Eagle Claw? They hark back to an era when we weren’t afraid of our own imperial ambitions. Indeed, for better or worse, we were proud of our global reach. In the past ten years, Washington’s attempts to whitewash our foreign policy have become particularly heavy-handed and saccharine. It’s an insult to our intelligence, and the absence of outrage is perplexing.

But maybe, just maybe, Washington is right about us. They know exactly what words we want, and need, to hear before we go to war: Freedom, Dawn, and Change.