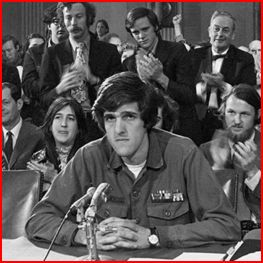 Secretary of State John Kerry testifies in the Senate in 1976. AP.

Never mind that he wasn’t the Secretary of State when more than 100 gunmen attacked the US consulate in Benghazi and killed four people, including Ambassador Christopher Stephens, on Sept 11, 2012. SecState on that day was potential 2016 presidential candidate Hillary Clinton. The noisy fight between both parties over the necessity for Kerry’s testimony, exemplifies the one thing we know about Benghazi today: We’re no closer to the truth than we were 21 months ago.

Formally known as the Select Committee on Events Surrounding the 2012 Terrorist Attack in Benghazi, the House panel is the fifth congressional probe into the attack. The four already in existence have produced the requisite reports, yet partisan bickering and finger-pointing over the narrative is all we’ve been hearing from the mainstream press.

As we posited in an earlier article, there’s a possibility that what really happened in Benghazi is unflattering to both Republicans and Democrats, and is being covered up by both sides. Will the fifth Congressional committee’s investigation produce answers, or will it be full of sound and fury, signifying nothing?

The history of Congressional inquiries into national security issues provides a clear lesson—Congress is happy to look for blame anywhere but where it would reflect poorly on its own involvement and funding responsibilities.

Based on that history, and information that has emerged since the Benghazi attack, it is a good bet that Congress will not address the following two issues in their upcoming hearings:

The first issue likely to be avoided is the Benghazi-based CIA covert-action project, compromised by both the death of the American ambassador to Libya, Stephens, and the immediate political response of Congress following the attacks on the State Department complex – which we now know to have been a State Department cover for a covert CIA weapons interdiction operation run out of the “embassy annex.”

There is every indication that a pro-active covert action was in play, involving not only CIA personnel but the ambassador himself. Stephens acted as a conduit to Libyans who had come to trust him when the U.S. and NATO worked with them during the insurgency against Muammar Qaddafi.

A pre-emptive covert operation to interdict heavy weapons from distribution to radical jihadi insurgencies across North Africa is not something the critics of the Obama administration will want to tout. Moreover, it’s something the administration and any agencies involved are legally prohibited from discussing, other than with the limited number of legislators sitting on specific intelligence oversight committees.

They’re also prohibited from talking about such matters publicly. The same constraints would apply to the portion of the operation that seemed to involve procurement of Russian-made weapons intended to be placed with select, non-jihadi insurgents within Syria.

A discussion of the intelligence operation would also expose the Administration’s reason for not identifying an al-Qaeda link to the attack, either in the initial press statements, or in remarks at the U.N. and in any material provided by the CIA. It would be embarrassing for a number of Congress members to admit that they either a) do not understand how compartmentalized security prevents them from getting a straight answer, or b) are simply eager to spin events relating to national security issues for immediate political gratification.

Unfortunately, Congress has a history of ignoring reality in favor of self-serving spin, extending as far back as its feigned ignorance of the covert State Department/CIA military operations in Laos in the 1960s. The truth is, any secret presidential findings about Libya and Syria would be barred from release, and any Congressional intelligence oversight committee members in the know will simply not be called to testify.

The second issue to be avoided is the lack of institutional memory in Congress and the degree to which privatization has been allowed to overtake what were formerly the military’s responsibilities for the security of American embassies and facilities overseas.

The Committee will most likely not call Richard A. Clarke, the former National Coordinator for Security, Infrastructure Protection, and Counter-terrorism.

In 1999, Clarke was assigned to conduct a hard-nosed, pragmatic assessment of embassy security, sending multi-agency teams around the world to look at American facilities from the terrorists’ viewpoint. As a result, the Clinton Administration strengthened security at some places, closed posts that could not be made safe, and suspended diplomatic and consular services in nations where the governments were unwilling to provide security.

That project required money, and it was funded by the Clinton administration and Congress. But, as Clarke relates in his book, “Against All Enemies: Inside America’s War on Terror,” these funds were removed from the budget in 2000, and embassy protection slipped to a lower priority – where it has remained ever since.

What are the odds the new Congressional committee will want to hear what Mr. Clarke would tell them — with the whole world watching?