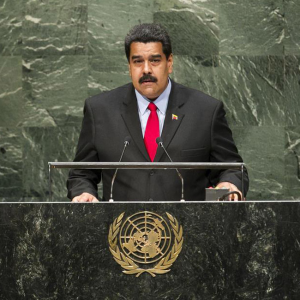 What Venezuela’s UN Seat Illuminates About US Hypocrisy The impending arrival of Venezuela on the United Nations Security Council is provoking a firestorm of media criticism in the U.S. Virtually all the stories focus on the human rights record of this South American nation with an avowedly leftist government.

In addition to the five permanent members of the Security Council – the U.S., the United Kingdom, France, Russia and China—the U.N. General Assembly votes to fill 10 other seats, on a rotating basis, for two-year terms.

On Oct. 16, Venezuela won the seat reserved for a Latin American or Caribbean nation unopposed. The last time Venezuela was up for a seat, in 2006, the U.S. succeeded in blocking its bid.  This time, U.S. officials have had to be content with issuing dire warnings about a dangerous new player on the international community’s most prestigious and powerful panel.

An article in the New York Times suggested the newly appointed country “may well use its perch on the Council for delivering anti-American diatribes.” A Foreign Policy story entitled “Venezuela’s Revenge” described the Venezuelan delegation as cult followers of late president Hugo Chavez, then quoted Samantha Power, the U.S. ambassador to the United Nations:

Venezuela’s conduct at the U.N. has run counter to the spirit of the U.N. charter and its violations of human rights at home are at odds with the [U.N.] charter’s letter.

The Christian Science Monitor uncritically repeated American officials’ condemnations, and added that some “conservative critics say” Venezuela has “provided Iran with entree into the Western Hemisphere.”

But is Venezuela really an unrivaled human-rights monster, worthy of universal condemnation?

A look at some established human-rights metrics offers a more nuanced view:

The U.N. Universal Declaration of Human Rights gives protection from the deprivation of life as well as cruel punishment. “The death penalty violates both of these fundamental rights,” Amnesty International said.

Venezuela abolished the death penalty in 1863, although security forces have been involved in extrajudicial killings and have often gotten away with it.

The U.S. has executed 30 people this year. Last year, it executed 39, the fifth most in the world, according to Amnesty. Police killings of unarmed “suspects” have made headlines in the American press all too frequently.

The Universal Declaration states that “Everyone has the right to a standard of living adequate for the health and well-being of himself and of his family, including… medical care.”

Venezuelans are guaranteed the right to health care under the country’s constitution. While the system is plagued by shortages of medicine, patients are not turned away based on their inability to pay.

The U.S., despite its position among the richest societies in the world, scores poorly in terms of healthcare among its peers. The U.S. charges high fees to the uninsured, resulting in a situation in which the majority of bankruptcies filed by U.S. citizens are caused by medical debt.

Hand-in-hand with this trend, American citizens are far more likely to forego medical care because of cost than citizens of comparably prosperous societies.  It’s too soon to tell how Obamacare will affect this situation.

Thanks to an excessive police response, Amnesty International sent an observation team to Ferguson, Missouri, during the unrest—the first time Amnesty has deployed observers in the United States. It has been estimated that routine practices at the Guantanamo Bay detention camp may violate as many as 19 of the 30 articles in the Universal Declaration.

Venezuela’s government has routinely targeted TV stations, websites and publications critical of the government with administrative enforcement actions. It has yanked TV stations with opposing political views off the air with little or no warning, or threatened their licenses.

Despite occasional harassment (and even imprisonment) of reporters who fail to cooperate with courts by revealing the names of sources, the United States is generally rated a bastion of press freedom. An issue that has generated increasing controversy is whether freelance investigators deserve the same Constitutional protections as credentialed journalists for mainstream publications.

The U.N. in resolution 64/292 declared the right to safe water and sanitation an essential human right.

In June, a group of experts who report to the UN called the cut-offs of water supply to Detroit families unable to pay water bills a violation of human rights. “In other words, when there is genuine inability to pay, human rights simply forbids disconnections,” said Catarina de Albuquerque, U.N. special rapporteur on the right to safe drinking water and sanitation.

About three-fourths of Venezuelans living in rural areas had access to potable water in 2007, according to the World Bank. Venezuela claims it has given water access to 96 percent of the public, but the latest World Bank reports have no correlating data.

None of this is to say that Venezuela is not a large-scale violator of human rights, as it most certainly is. Even the United Nations has taken it to task for attacks by security forces on university students and protesters. Rather, the facts demonstrate a selective national blindness on the part of many Americans toward their own government’s human rights record.

To the mainstream American media, the term “human rights violations” refers to events in which a country commits violations that the United States does not.

Samantha Power’s diplomatic rhetoric is to be expected, and hypocrisy is part of the game in such a setting. What is more telling is the American media’s complacency with a double standard that pretends to objectivity where there is none.

To ignore the very real criticisms coming from the U.N. and other countries about human-rights violations in the U.S. is to perpetuate a failure to see ourselves as others see us—a failure that can prove self-defeating to any nation that seeks to advance its interests in an international forum it does not control.