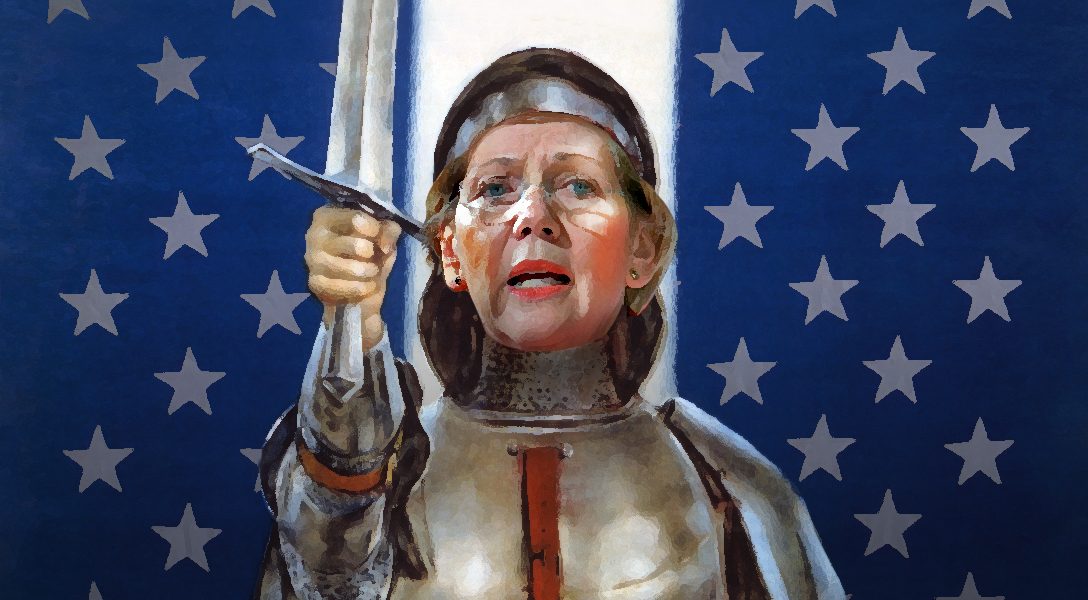 Photo credit: Adapted by WhoWhatWhy from US Department of Labor / Wikimedia, Library of Congress / Wikimedia, and Kristopher Harris / Flickr (CC BY 2.0).
Government Integrity

Perhaps the GQ headline put it best: “Sen. Elizabeth Warren Chose a Hell of a Day to Unveil Her Sweeping Anti-Corruption Bill.”

That phrase could be taken two ways: the evils Warren (D-MA) targeted were dramatized on August 21, when she unveiled her anti-corruption package in a hard-hitting speech at the National Press Club. That, of course, was the day that Paul Manafort, former chair of Donald Trump’s presidential campaign, was convicted of tax and bank fraud, and Trump’s long-time personal lawyer Michael Cohen pleaded guilty to tax and bank fraud as well as violating campaign finance law.

With so much breaking news, the big mainstream media sites did not have much time to actually report what she proposed.

And when Warren did get some space, the media largely viewed her anti-corruption pitch as an indictment of Trump. But from the outset, Warren made clear that wasn’t the case. “The problem is far bigger than Trump,” she said.

There’s a “crisis of faith” in government now, and fewer than one in five Americans trust that federal policymakers will do the right thing most of the time, she said. In 1958, 73 percent of Americans put their trust in Washington.

“I’m sure the people who make big money off the current system will yell and scream and spend millions of dollars trying to stop these changes.”

Such a lack of trust, she said,” leads people to turn away from democracy,” and helps foster both cynicism and totalitarianism. “Americans are right” to think that government doesn’t work for them, she added. It works for “the rich, powerful, well-connected.”

For that reason, she was offering up what she termed the “most ambitious anti-corruption legislation … since Watergate.”

Her aim? To do away with “soft corruption” by curbing the buying and selling of influence on Capitol Hill and in the White House.

Essentially, the bill would make “soft corruption” illegal. It’s not intended as legislation that would get passed by Congress in one big stroke. It’s more a comprehensive list of all the things lawmakers could do to actually drain the swamp.

“Inside Washington, some of these proposals will be very unpopular, even with some of my friends,” Warren acknowledged. “Outside Washington, I expect that most people will see these ideas as no-brainers and be shocked they’re not already the law.” This bill is mostly about the evils of lobbying. Warren contends that too many corporate lobbyists have too much sway in Congress, the White House, and even in the courts.

As Congress’s own “in-house expertise” shrinks, she charged, lobbyists fill the vacuum with testimony and slanted studies, “so only lobbyist stories get heard.”

Too many people who actually try to influence the government don’t have to report what they’re doing because they don’t have to register as federal lobbyists to begin with.

Too many lobbyists blithely waltz in and out of government positions, enhancing their ability to influence public policy.

Related: New Frontline in the Battle for Campaign Finance Reform

And too many members of Congress and agency staffers leave public service to take well-paying jobs lobbying their former colleagues.

Her bill would broaden the definition of lobbyist to include anyone who tries to influence federal policy. So the corporate CEO who met with powerful members of key committees would have to register as a lobbyist, not just the lobbying firm the CEO hired to help his company push its agenda.

Other reforms in her package include: preventing senior agency officials and lawmakers from owning and trading individual stocks; increasing transparency at federal courts; and imposing stricter ethics rules on all judges, including members of the Supreme Court.

All these new rules would be enforced by what she termed “a new sheriff” — an independent US Office of Public Integrity, which would have the power to subpoena witnesses, investigate, and fine violators, or refer miscreants to the Department of Justice for criminal prosecution.

And yes, some reforms were clearly aimed at preventing more Trumpian abuses. The Internal Revenue Service would be required to disclose eight years of tax returns for every candidate for president and vice president, and then annually, while these elected officials hold federal office.

Presidents and vice presidents also could no longer hold onto any business interest or investment that could pose a real or potential conflict of interest.

Warren clearly could not ignore the elephant in the room. The current administration is “the most corrupt in our lifetimes … the biggest, stinkiest” illustration of the problem, she said. Birth of the Lobbyist

Even so, for her the evil dates back to the 1970s. Fifty years ago, she recalled, there was no “corporate lobbying industry.” That changed after environmental, consumer, and public health advocates were able to persuade Congress to pass a series of sweeping laws like the Clean Air Act and Clean Water Act, as well as new regulations to better protect the public from business abuses.

In 1971, she said, “a hotshot corporate lawyer named Lewis Powell” wrote a memo to the US Chamber of Commerce that essentially was “a declaration of war on democracy.”

Two months after he wrote the memo, Powell was nominated for a seat on the Supreme Court. The confidential memo was not uncovered by the FBI, and the Senate failed to scrutinize Powell’s pro-business leanings. The Senate approved him by a vote of 89 to 1.

“The memo was kept secret,” Warren said. A few months after he took his seat on the bench, maverick investigative reporter Jack Anderson exposed it.

Warren anticipated the pushback her reform effort would get, but she was ready with her own rebuttal. “I’m sure the people who make big money off the current system will yell and scream and spend millions of dollars trying to stop these changes,” she said.

“And the all-day-long pundits and Washington insiders who live in the same neighborhoods and eat at the same sushi bars and go to the same book parties will say ‘this will never pass’ and try to color me naïve for even trying. But it’s that kind of self-serving group-think,” she charged, “that’s allowed corruption to spread through this town for decades.”