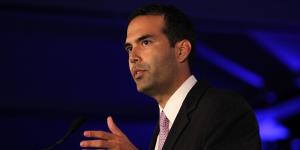 The Bush family has sent two presidents to the White House, and Tuesday’s midterm election put the newest Bush into elected office: George P. Bush, now the Texas Land Commissioner. So what’s the long game for the son of Jeb Bush, and even the former Florida Governor himself?

The newly minted land commissioner, who oversees the mineral rights owned by the State of Texas, is the product of a political chess game that’s five generations old, according to Russ. Former president George H.W. Bush is “quite masterful at identifying opportunities. The family has spread itself all over the country, and they’ve got cousins and others who may also be running for office,” Russ said.

Listen in for more little-known details about one of America’s most enduring and influential political dynasties, culled from Russ’ book, “Family of Secrets: The Bush Dynasty, America’s Invisible Government, and the Hidden History of the Last Fifty Years.”

And there has never been a better time to explore those secrets, because on Nov. 11, the official biography of George H.W. Bush will be published. The book by George W. Bush, “41: A Portrait of My Father,” is certain to include little to none of the hidden family history.