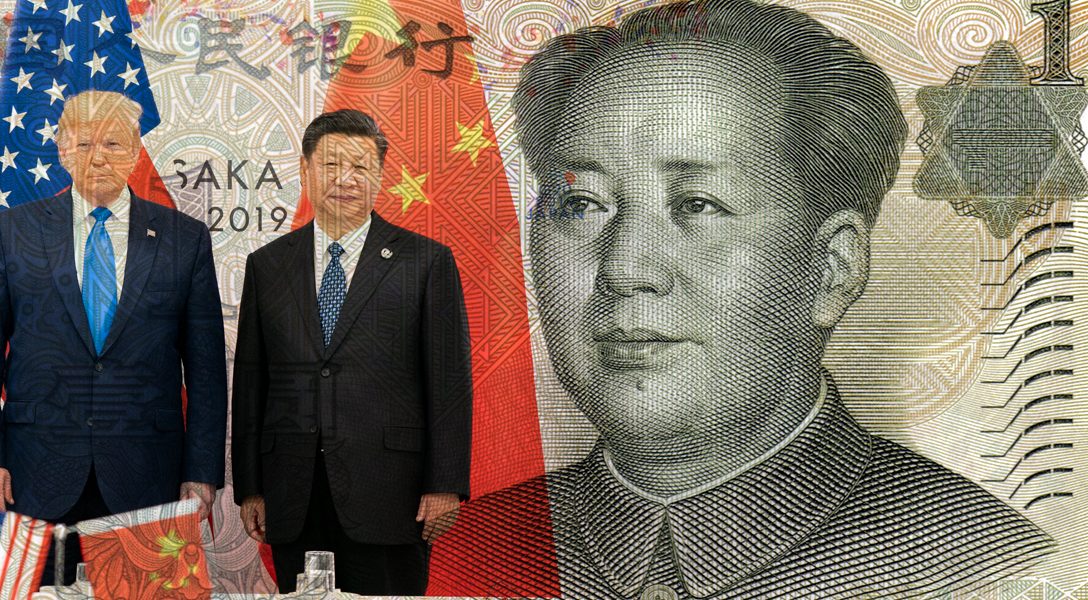 US President Donald Trump with Xi Jinping, president of the People’s Republic of China, superimposed over portion of a one yuan note. Photo credit: Adapted by WhoWhatWhy from The White House / Flickr and Jason Wesley Upton / Flickr (CC BY 2.0).
Government Integrity

If you believe President Donald Trump, Beijing has opened a devious new front in the US-China trade war by manipulating its currency to make Chinese exports more competitive and retaliate for the damage inflicted by US tariffs. The evidence: On Monday, three days after Trump announced punitive tariffs on an additional $300 billion of Chinese goods, the renminbi (literally “people’s dollar,” also called the yuan) weakened to its lowest level since 2008.

Trump promptly declared China a “currency manipulator,” a verdict officially seconded by his Treasury Department. China’s central bank called the designation “unreasonable,” warning that it would “seriously undermine the international financial order” and “trigger financial market turmoil.” Sure enough, US stocks fell sharply on Monday, though they largely recovered by Thursday.

It’s not clear what impact, if any, Trump’s move will have on average Americans in the short term. But an intensified trade war could induce a prolonged stock market slump, which in its usual self-fulfilling way could prompt the recession that some say is historically overdue. Economist Paul Krugman notes that the bond market, usually a better leading indicator than the equity market, is already flashing yellow.

For now, the designation means little in practical terms. The Treasury will consult with the International Monetary Fund, attempt to iron out differences with China, and, if all else fails, impose a set of relatively minor sanctions. Yale economist Stephen Roach calls the designation an “empty threat” and says China has “plenty of options to consider” if Trump insists on turning up the heat.

The administration bases its declaration on the 1988 Omnibus Trade and Competitiveness Act, which requires the Treasury to “consider whether countries manipulate the rate of exchange” to gain an unfair trade advantage. That law exists alongside a 2015 act that stipulates three criteria for a charge of currency manipulation: a bilateral trade surplus with the US exceeding $20 billion; a current-account surplus (which covers services as well as goods) that is at least 3 percent of GDP, and “persistent, one-sided intervention” in currency markets that totals at least 2 percent of GDP over a 12-month period. China meets only the first criterion.

Trump has a bit of a timing problem here. If China is a currency manipulator now, why wasn’t it two-and-a-half-years ago, when he took office having promised to make the designation on “day one”? For that matter, why wasn’t China guilty three months ago, when the Treasury declared it was not a currency manipulator? Or in July, when the IMF ruled that the renminbi is not being systematically undervalued but is trading in line with economic fundamentals?

“China met only one of those [three Treasury] criteria in the spring and it meets only one of them now,” says Brad Setser, a former Treasury Department economist now with the Council on Foreign Relations. “China doesn’t have a large overall surplus, and it’s not been consistently intervening to hold its currency down. It’s actually been supporting the [renminbi] recently.”

Like anything emanating from the Trump White House, Monday’s declaration probably says less about Beijing than it does about a petulant president eager to placate his nativist base by appearing to get tough on China.

“I think this particular decision was politically motivated,” said Setser, “and that China doesn’t meet the traditional criteria that most people use to evaluate whether a currency is being held at a weak level, which is one definition of manipulation.”

What seems to have ignited Trump this week is the numeral 7. That’s the number of renminbi per dollar that the Chinese currency weakened to on Monday, up from 6.94 on Friday. (A higher number means a weaker renminbi, because it takes more of the Chinese unit to buy a US unit.) There’s nothing magic about 7.0, but with the media treating it as some sort of red line, Trump no doubt reasoned that doing nothing would look weak.

Yet China’s currency regime is arguably little different from those of many nations who keep their exchange rates tightly controlled through what’s known as a “managed float” (Singapore, Malaysia), or simply pegged to the dollar at a fixed rate (Hong Kong’s currency, since 1983). Several are on a Treasury watch list, but have so far been spared an official designation.

In any event, as Krugman put it, “think for a minute about what would happen to a country with an unmanipulated currency, if one of its major export markets suddenly slapped major tariffs on many of its goods. You’d surely expect to see that country’s currency depreciate, just as Britain’s has with the prospect of lost market access due to Brexit.”

To be sure, the US has legitimate complaints about China’s state-directed, mercantilist economy, which many say has helped it become a kind of apex predator in the realms of trade and geopolitics. The US did, in fact, designate China a currency manipulator at various points in the 1990s. But this time around, notes Krugman, the US “has managed to accuse the Chinese of the one economic crime of which they happen to be innocent.”

Beijing has several mechanisms for controlling the renminbi. One is capital controls that limit domestic access to foreign currencies. But its primary tool is what’s known as the “daily fix,” a target exchange-rate range set by the People’s Bank of China (PBOC). Traders stray from it at their peril. Get too far out of line and the PBOC can use its $3 trillion in reserves to move the currency in ways that can cost market players their shirts.

The US has no such policy, though it does have the means. The Federal Reserve can lower rates, weakening the dollar by making it a less attractive place to park money, as Trump is pressuring it to do. It can also, like the PBOC, intervene with the Treasury to buy foreign currencies, raising their values relative to the dollar. But Fed policy is intended by law to maximize employment and stabilize prices (its famous “dual mandate”), not to influence exchange rates. And to do so would open the US to the same charges it’s now leveling against China.

Indeed, some already say that the US, not China, is the currency manipulator, noting Trump’s pressure on the Fed to lower rates, which would have the indirect effect of weakening the dollar. Fed Chairman Jerome Powell in December signaled an easing in policy, and the Fed did cut its key rate last month, for the first time since 2008.

As Bloomberg’s Shuli Ren wrote in in February, “In other parts of the world, such a chain of events could easily be perceived as currency manipulation.”