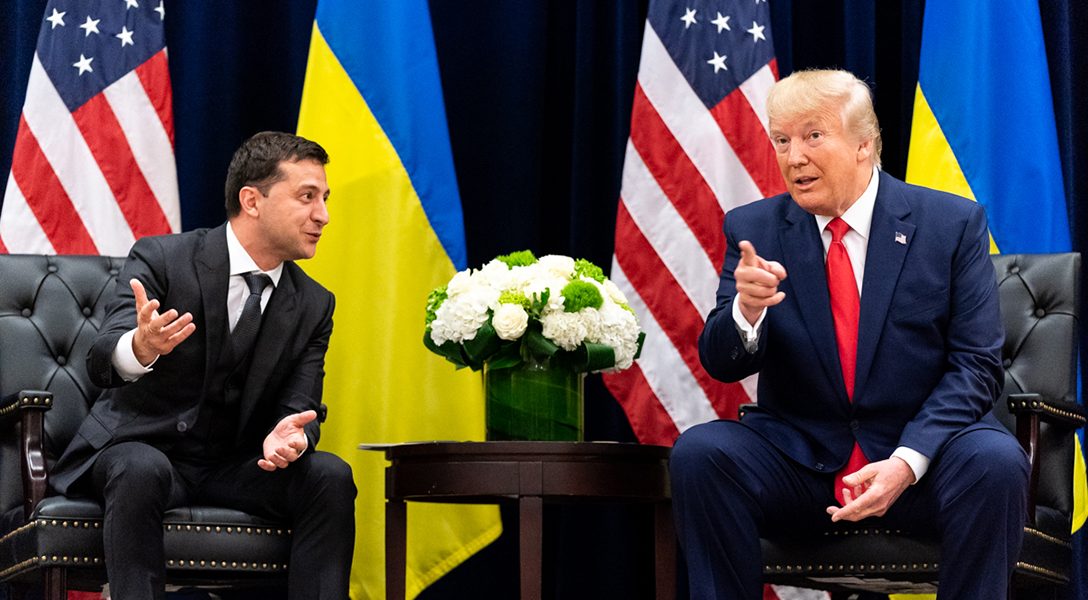 Ukrainian President Volodymyr Zelensky starred in the “performance of his life” during a phone call with President Donald Trump and their subsequent meeting in New York, the Kyiv Post commented on Thursday. But while Trump faces an impeachment inquiry, Zelensky will likely get away with an epic loss of face, experts say. As a former comedy actor, he is well accustomed to it.

Trump stands accused of extorting Ukraine to investigate the son of Joe Biden, the former vice president who is a frontrunner to win the 2020 Democratic presidential nomination. Ukrainian officials had denied any coercion in a complicated case where few see any potential wrongdoing on the part of the Bidens; and Zelensky had said details of their discussion were “private and confidential.” Nevertheless, on Wednesday the White House released the transcript of a July 25 phone call that had triggered a whistleblower complaint in the US, fueling the growing domestic scandal and embarrassing the Ukrainians.

Social media exploded with derision for Zelensky’s pronounced obeisance to Trump: “You are a great teacher for us” in building “a new type of government,” Ukraine’s leader said, adding that he stayed at Trump Tower in New York.

His attempts to please the US president by disparaging allies including France and Germany also drew sharp criticism. Yet experts say the damage to him and to Ukraine is likely to be limited.

We can either take my plane and go to Ukraine or we can take your plane, which is probably much better than mine.#Zelensky #Trump pic.twitter.com/casisEzfRj

“I don’t think it will have any serious impact on either [Ukraine’s] domestic situation or its relations with other countries,” George Voloshin, a geopolitical expert at Aperio Intelligence, a UK-based strategic intelligence company, told WhoWhatWhy: “The transcript does not reveal anything new — even less so anything shocking — about Ukraine or Zelensky but it does much harm to Trump, and we are already seeing that.”

Zelensky and Trump — both former reality TV stars in their respective countries — laughed it all off during a press conference in New York. Zelensky is likely to get more sympathy than Trump: after all, what else can he do but try to ingratiate himself with an American leader often mocked for his apparent narcissism and incoherent speaking style?

Ukraine is in a tough spot. It is on financial life support from the West and, since 2014, has been fighting a low-intensity civil war against Russian proxies in the Russian-speaking east of the country. With support from European allies sagging, Zelensky, who was elected president in April, is strongly dependent on the US. In the center of a growing row between Democrats and Republicans, he faces a delicate balancing act.

Some of the diplomatic fallout, which Reuters compared to a “car crash,” may yet come back to haunt Ukraine.

“Russia has so far been the biggest winner of the scandal surrounding [the] Trump-Zelensky phone conversation,” Olena Lennon, a Ukraine expert at the University of New Haven, told WhoWhatWhy. She noted, nevertheless, that Ukraine’s allies in Europe and the US Congress would likely show understanding for Zelensky’s predicament.

Judging by both the transcript memorandum, in which Zelensky emphasized Ukraine’s need for assistance against Russia, and also by the press conference, the relationship between the two antagonistic neighbors is unlikely to get better.

Trump: "I really hope you and President Putin get together and can solve your problem."

“I think it was an hour of global prominence for Zelensky, though he was dismayed evidently by Trump’s suggestion to accommodate with Putin,” a prominent Russian analyst, Victor Mizin of the Center for Strategic Assessments in Moscow, said in an email to WhoWhatWhy.

That, however, plays to Zelensky’s domestic audience. Since the tense standoff with Russia remains high on everyone’s mind in Ukraine, he stayed pointedly on-message. Besides, nothing he said or did jarred with his unorthodox style of campaigning and speaking, which is sometimes compared to Trump’s.

“The released transcript of Zelensky’s phone conversation with Trump is likely not going to affect Zelensky’s domestic standing,” said Lennon.

The American Lobbyist Who Undermined a Democracy

“It is precisely his norm-breaking mode of operation, unorthodoxy, and bravado that make him popular among his supporters, including ways in which he engages with world leaders,” Lennon added. “Zelensky’s team are also masters of manipulating public perception by presenting Zelensky’s engagement with Trump as a sign of Ukraine’s strategic importance to the US and elevating the status of Ukraine to an important international player.”

Still, Ukraine’s president will likely face some fallout. At home, his assertion that the next prosecutor general “will be 100 percent my person” is bound to raise concerns among Ukrainians worried that he might be planning a power grab. His connections to Ihor Kolomoisky, one of Ukraine’s powerful oligarchs, have long attracted scrutiny.

“There is a growing fear in Ukraine that while Zelensky is aggressively pursuing anti-corruption reforms to fulfill his campaign promises, he himself is subservient to corrupt, oligarchic interests and is turning Ukraine into a super-presidential republic,” added Lennon.

Related front page panorama photo credit: Adapted by WhoWhatWhy from The White House / Flickr and President of the Russia / Wikimedia (CC BY 4.0).