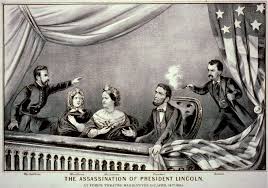 The Lincoln Assassination and Cover-Up: Part of an On-Going Story The 150th anniversary of Abraham Lincoln’s murder is one more reminder from the past of a distinctive feature of the American system. This is that some American presidents reach office by assassination, not by election. More importantly, when this happens, a lot of facts are usually going to be left at best unexplained, and often covered up.

Few Americans know, for example, that in 1991 the body of President Zachary Taylor, who died in 1850 after a year in office, was exhumed and found to contain suspicious amounts of arsenic. But the New York Times announced that further analysis showed the amounts of arsenic were no more than what is normally found in the body, confirming that Taylor died a natural death.

Wikipedia claims that this is proven by Neutron Activation Analysis (NAA) at the Oak Ridge National Laboratory, citing an article on the Lab website that is forbidden to the public. Wikipedia does not mention that NAA analysis on the same Isotope Reactor was used four decades ago to analyze the bullets killing John F. Kennedy. (The use of NAA analysis of lead in bullets, once used to bolster the “single bullet theory” of Lee Harvey Oswald’s guilt, has since been decisively discredited by other U.S. Government experts at the Lawrence Livermore Laboratory. In September 2005 the FBI announced that it would no longer rely in criminal cases on the inaccurate evidence produced by comparative bullet lead analysis.)

Even more mysteries surround the assistance provided Lincoln’s assassin, John Wilkes Booth. In a recent article, the Washington Post described Booth as “embittered,” the term used by Psychology Today to “analyze” Lee Harvey Oswald. Other more scholarly studies have argued that Booth was originally plotting not the murder but the abduction of Lincoln, Vice-President Johnson, and Secretary of State Seward. This was part of a coherent strategy to throw the determination of the next president into the hands of the Supreme Court, where Chief Justice Roger Taney had already shown in the Dred Scott case that he was pro-slavery and sympathetic to the South. Speculation of a cover-up about Booth has abounded since the time that four of his associates in the crime were swiftly hanged. A benign explanation for the cover-up would be the desire to avoid dealing with the possibility that Booth had been guided or at least assisted in his plotting by the Confederate Secret Service. This was suspected almost immediately when a Vigenère Cipher table (a code used by the South) was discovered among Booth’s effects. At that time a strong need to restore unity to a divided nation would have been an ample motive to present Booth, like Oswald a century later, as an embittered loner.

It is now pretty well established, by historian Thomas Goodrich and others, that Booth had traveled widely to Canada and elsewhere as a spy and courier for the Confederate Secret Service. Other historians have concluded, in the words of David Herbert Donald, that “at least at the lower levels of the Southern secret service, the abduction of the Union President was under consideration.”

Whether Booth was following orders in his activities or was acting on his own is less clear. But it is certain that Booth was able to elude capture for 12 days after the assassination by using safe houses in Virginia along an escape route which the Confederate Secret Service had previously organized.

The cover-up about Booth has long survived any original motive for it. Only in the last half century have we begun to see books like William Tidwell’s Come Retribution: The Confederate Secret Service and the Assassination of Lincoln. Yet from time to time we still continue to hear from authors like Jim Bishop and Bill O’Reilly, who write profitable best-sellers, one arguing that Booth, the other that Oswald, was essentially a loner.

An egregious attempt to present Booth as a loner was that of former CIA Director Allen Dulles, at an early executive session of the Warren Commission on January 16, 1964. Dulles explained that, according to a book he was handing out to members of the Commission, European assassinations were the work of conspiracies—but American assassins acted alone.

Given that two of Booth’s targets, Lincoln and Seward, were attacked almost simultaneously in different parts of the city (Seward was stabbed by Lewis Powell in his bed during the Lincoln assassination), John J. McCloy promptly objected, arguing that “the Lincoln assassination was a plot.” Undeterred, Dulles shot right back: “Yes, but one man was so dominant that it almost wasn’t a plot.” Dulles was using his authority to indicate what he thought the Commission should conclude. Seven months later the Warren Report amply fulfilled his wish and declared that the death of Kennedy was, too, the work of a loner.

Dulles’s intervention indicates to me that American cover-ups of what I call “deep events”—events about which we are denied the truth—are themselves an on-going and interconnected story. For example: in a special section of the Warren Report, written to discredit “Speculations and Rumors” of a possible conspiracy in JFK’s death, Commission staffer Alfred Goldberg began by noting that:

“Myths have traditionally surrounded the dramatic assassinations of history. The rumors and theories about the assassination of Abraham Lincoln that are still being publicized were for the most part first bruited within months of his death.”

Goldberg is also co-author of Pentagon 9/11 which is, possibly, another example of an ongoing coverup.

Goldberg was quite right in acknowledging the persistence of myths about assassinations. And we will never move beyond myths to a clearer understanding of what took place, who ultimately was responsible, what it meant, and how best to restore democracy to this country, until we fully grasp the role of Allen Dulles and others like  him in sustaining those myths.