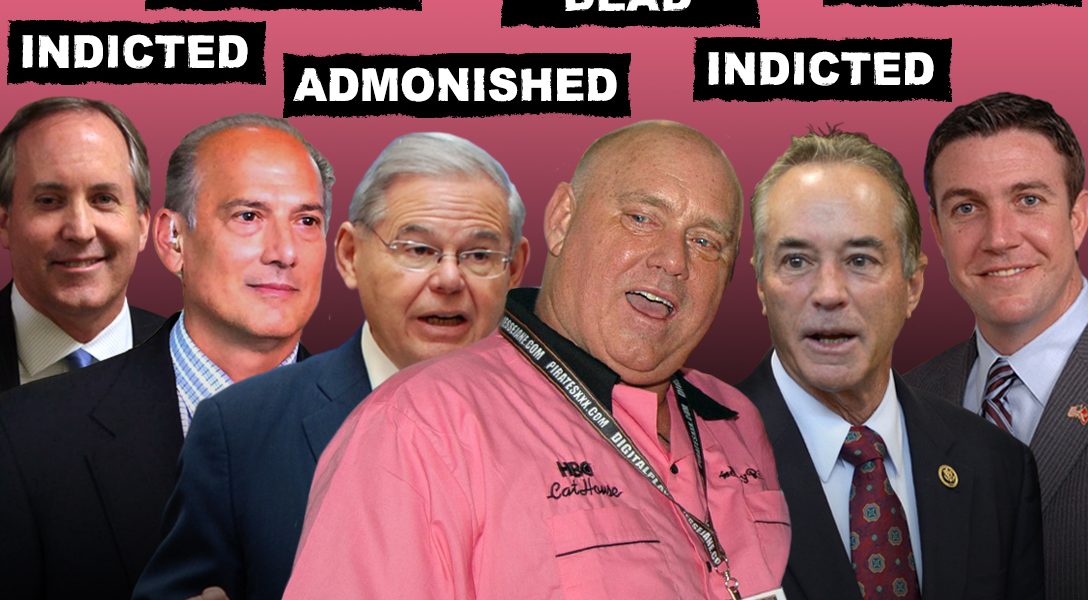 The Indicted and the Dead

To be law-abiding and breathing: These are, generally speaking, two commendable qualifications for a candidate to meet when seeking public office. But, as our republic occasionally reminds us, they are not requirements.

For the indicted and the dead have been elected before, and likely will be again. This past election was no different, providing several notable examples of criminal defendants being elected to office, as well as a congressman who sued an elderly constituent for defamation. And, of course, this list would not be complete without the dead pimp who won a race in Nevada.

While it is unusual for such candidates to win elections, it is not unheard of, particularly in Congress. Analysis found that at least 25 sitting congressmen since 1987 have been elected despite being under indictment.

Despite being under indictment on federal insider trading charges, incumbent Republican Chris Collins narrowly defeated his Democratic opponent Nate McMurray by 2,910 votes, or 1.1 percent of the vote.

According to prosecutors, Collins learned of failed drug trials involving Innate, an Australian biotech firm, then immediately called his son to tell him to sell $1.4 million in company stock. Collins was captured on video making the call during a June 22 congressional picnic on the White House lawn. At the time, Collins was already the subject of an ethics investigation because of his dealings with Innate. Prior to the indictment, an insider-trading complaint against Collins was filed by Craig Holman, government affairs lobbyist for Public Citizen, a nonprofit ethics watchdog. Holman told WhoWhatWhy his complaint was eventually forwarded from the Office of Congressional Ethics to the House Ethics Committee, which “just sat on it and did nothing with it.”

Now that Collins is both indicted and elected, Holman said he expects a repeat of the fate of William Jefferson (D), the Louisiana congressman who was also reelected while under indictment. Jefferson was convicted in 2009 on corruption charges and thrown out of Congress.

Holman thinks that the Collins reelection campaign may have been a “strategic move” in an attempt to gain some leverage as a sitting congressman and thereby “try to reduce his sentence.”

One important lesson to be learned from the congressman’s reelection, he said, is that Collins’s conservative constituents “appear to favor Trump and Trump’s philosophies more than they are concerned about the criminal activity by Chris Collins.”

Collins, the first congressman to support Donald Trump’s 2016 candidacy, initially said he would resign over the scandal, but changed his mind and came back swinging: Collins then ran a television ad alleging that his opponent McMurray favored creating jobs for China and Korea at the expense of American workers, and showing footage of McMurray’s wife — a naturalized South Korean — speaking in Korean.

Republican Duncan L. Hunter was an institution in southern California, holding office continuously from 1981 through 2009. In 2009 he retired, and his son Duncan D. Hunter took his place.

The younger Hunter continued to get reelected himself, until he hit a snag in 2017 when federal prosecutors slapped him and his wife with a 60-count indictment on felony charges of wire fraud and campaign finance violations. He allegedly spent campaign donations on everything from vacations to everyday expenses and bar tabs.

Hunter, the second sitting congressman to back Trump in 2016, followed the strategy of Collins in waving away the allegations as “a witch hunt.” But his public defense took a strange turn when he seemed to blame his wife for mishandling his campaign funds.

Holman (of Public Citizen) called Hunter “an utter idiot” and “just so unethical” because of his behavior and his jaw-dropping method of defending himself by blaming his wife. “Man, I wouldn’t have wanted to have been at that family’s dinner that night,” he said.

Holman also saw Hunter’s reelection as mirroring Collins in that it indicates that Trump voters, “at least in those districts,” care more about supporting the president than they do about ethical lapses and outright criminal activity.

Hunter, who refused to step down from his campaign, then followed Collins’s formula for reelection by releasing a TV ad that depicted his Democratic opponent, Ammar Campa-Najjar, who is of Palestinian and Mexican descent, as being “a security risk” and a terrorist sympathizer.

Republican incumbent Tom Marino recently won reelection by a substantial margin over Democratic challenger Marc Friedenberg, despite the fact that earlier this year, Marino sued two of his constituents — one of them a grandmother in her 80s — for defamation and invasion of privacy. Marino filed the lawsuit in the run-up to the May primary, charging that Marlene Steele and her son Michael had defamed him in an email received by less than a dozen people.

Friedenberg, Marino’s opponent, said the case was a great example of the Streisand effect, or the unintentional publicizing of information that occurs when a public figure tries to suppress this information by suing somebody.

“Almost nobody would have known about it,” he told WhoWhatWhy. Instead, thanks to the lawsuit, the allegations were plastered all over the local media and got picked up by national outlets, and the email was forwarded to thousands of people in Marino’s district.

And Steele’s claims, while exaggerated, contained some grains of truth. For instance, Marino, who took $134,000 in contributions from drug companies during the 2014 and 2016 campaigns, has been blamed for helping worsen the opioid crisis through his steady co-sponsorship of a bill that hampered the DEA from slapping injunctions on pharmacies and pill distributors suspected of unusual activity. Marino dismissed the criticism as “fake news.”

In 2017, Trump tapped Marino to head the Office of National Drug Control Policy, but Marino withdrew from consideration after a 60 Minutes/Washington Post investigation called attention to his role in the opioid crisis.

Steele also alleged a connection between Marino and the Mafia. Marino did in fact quit his job as US attorney in 2007 to go to work for mob-linked Pennsylvania businessman Louis DeNaples, following a controversy in which Marino gave his name as a reference to DeNaples on a state casino license application. Marino then went on to successfully run for Congress as part of the Tea Party wave of 2010. Marino, like Collins and Hunter, was another early congressional backer of Trump.

Democrat Bob Menendez succeeded in gaining reelection in a tight race against Republican Bob Hugin. Menendez was accused of accepting almost $1 million in gifts and in campaign contributions between 2006 and 2013 from Salomon Melgen, a Florida ophthalmologist who was convicted last year of defrauding Medicare of $90 million. Federal prosecutors said that Melgen bribed Menendez “to influence the outcome of ongoing contractual and Medicare billing disputes” and “support the visa applications of several of Melgen’s girlfriends.” Menendez’s trial ended last November in a hung jury, and the US Justice Department decided not to pursue the case further. Menendez was later admonished by the Senate Ethics Committee.

Paxton was first elected in 2014 by a margin of more than 20 percentage points, but this year’s race was a close one — he prevailed by a mere 3.6 percentage points. Indicted in July 2015, Paxton has successfully postponed his trial three times. Trump praised Paxton during a campaign rally in Houston, saying he was doing “a great job.” Dennis Hof, who first came to national attention as the proprietor of the infamous Bunny Ranch, managed to purvey his public image as a pimp and owner of five brothels into an HBO reality show called Cathouse.

But Donald Trump’s campaign for the White House inspired Hof to get into politics. Dubbing himself the “Trump of Pahrump” and running for state assembly as a Republican on a Trumpian platform, Hof managed to beat his Democratic opponent, Lesia Romanov, despite having dropped dead three weeks before the election. Hof won 68 percent of the vote.

Romanov, on a TV appearance with Jimmy Kimmel, attributed Hof’s win, paradoxically, to his death.

Hof’s seat is now in the hands of county commissioners in his assembly district, who will appoint another Republican to replace him — one who is presumably alive.

Clarification 11/11/2018, 9:50 a.m: An earlier version of this story said Marino recommended that DeNaples receive a casino licence. This version makes clear that he provided his name as a reference to a casino license application.

Correction notice, 11/15/2018, 3:15 p.m.: An earlier version of this story incorrectly stated that the suit against Michael Steele was still active. It was dropped one day before the Nov. 6 election after Steele apologized. We regret the error.