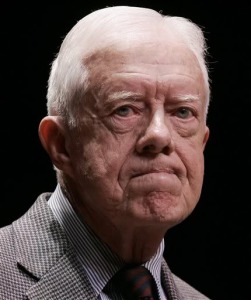 In “American Deep State,” Scott takes a compelling look at the facts lurking behind the official histories of events to uncover the real dynamics in play. In this exclusive excerpt—the second of several we’ll be featuring on WhoWhatWhy—Scott narrates how manipulations by Big Oil and a shadowy alliance of national intelligence agencies called the Safari Club helped Ronald Reagan defeat President Jimmy Carter in the 1980 election.(For the first excerpt, please click here.)

The Safari Club was an alliance between national intelligence agencies that wished to compensate for the CIA’s retrenchment in the wake of President Carter’s election and Senator Church’s post-Watergate reforms. As former Saudi intelligence chief Prince Turki bin Faisal once told Georgetown University alumni,

In 1976, after the Watergate matters took place here, your intelligence community was literally tied up by Congress. It could not do anything. It could not send spies, it could not write reports, and it could not pay money. In order to compensate for that, a group of countries got together in the hope of fighting Communism and established what was called the Safari Club. The Safari Club included France, Egypt, Saudi Arabia, Morocco, and Iran. (1)

After Carter was elected, the Safari Club allied itself with Richard Helms and Theodore Shackley against the more restrained intelligence policies of Jimmy Carter, according to Joseph Trento. In Trento’s account, the dismissal by William Colby in 1974 of CIA counterintelligence chief James Angleton,

combined with Watergate, is what prompted the Safari Club to start working with [former DCI Richard] Helms [then U.S. Ambassador to Iran] and his most trusted operatives outside of Congressional and even Agency purview. James Angleton said before his death that “Shackley and Helms … began working with outsiders like Adham and Saudi Arabia. The traditional CIA answering to the president was an empty vessel having little more than technical capability.”(2) Trento adds that “The Safari Club needed a network of banks to finance its intelligence operations. With the official blessing of George Bush as the head of the CIA, Adham transformed . . . the Bank of Credit and Commerce International (BCCI), into a worldwide money-laundering machine.”(3) Trento claims also that the Safari Club then was able to work with some of the controversial CIA operators who had been forced out of the CIA by Turner, and that this was coordinated by Theodore Shackley:

Shackley, who still had ambitions to become DCI, believed that without his many sources and operatives like [Edwin] Wilson, the Safari Club—operating with [former DCI Richard] Helms in charge in Tehran—would be ineffective. . . . Unless Shackley took direct action to complete the privatization of intelligence operations soon, the Safari Club would not have a conduit to [CIA] resources. The solution: create a totally private intelligence network using CIA assets until President Carter could be replaced. (4) During the 1980 election campaign each party accused the other of plotting an October Surprise to elect their candidate. Subsequently other journalists, notably Robert Parry, accused CIA veterans on the Reagan campaign, along with Shackley, of an arguably treasonable but successful plot with Iranians to delay return of the U.S. hostages until Reagan took office in January 1981. (5)

According to Parry, Alexandre de Marenches of the Safari Club arranged for William Casey (a fellow Knight of Malta) to meet with Iranian and Israeli representatives in Paris in July and October 1980, where Casey promised delivery to Iran of needed U.S. armaments in exchange for a delay in the return of the U.S. hostages in Iran. (6) Parry also suspects a role of BCCI in the subsequent flow of Israeli armaments to Iran. De Marenches was also a member of the Pinay Circle, “an international right-wing propaganda group which brings together serving or retired intelligence officers and politicians with links to right-wing intelligence factions from most of the countries in Europe.” At a June 1980 meeting of the Pinay Circle “attention was turned towards the American Presidential election that was to bring Reagan to power.”(7)

A more usual explanation for Carter’s defeat in 1980 was the second oil shock of 1979–1980, in which an acute gas shortage led to both a sudden increase in prices and long gas lines at service stations. It is customary for establishment scholars to blame the shortage on political upheavals in Iran, which led to “a cutoff of Iranian oil.”(8) However Robert Sherrill’s close analysis of the American oil industry demonstrates that American oil companies, not Iranian turmoil, were primarily responsible for the gas shortage:

U.S. companies were up to their own strategy . . . . Although in fact America was importing more oil in January and February [1979], during the Iranian shutdown, than it had imported during the same period in 1978, major oil importers pretended that the Iranian “shortage” . . . was real. It was the excuse they gave for slashing the amount of gasoline they supplied to their retail dealers. . . . A CIA study showed that in the first five months of the year, at a time when the Administration was deploring our oil shortage, U.S. companies exported more oil than they had in those glut years 1977 and 1978.(9)

The oil majors’ manipulation of domestic oil prices, combined with Carter’s failure to bring the hostages home, combined to cause the first defeat for an elected president running for reelection, since that of Herbert Hoover in 1932.

Not mentioned by either mainstream journalists or Sherrill was the role quietly played by Saudi Arabia in augmenting the 1979 gas crisis: “The Saudis had cut production by nearly 1 million barrels a day to 9.5 million at the start of the year [1979], and in April 1979 they made a second cut to 8.5 million. The Saudis had the capacity to produce 12 million barrels a day at that point.”(10)

The Saudi manipulation of gas prices reflected their acute displeasure with the Camp David Accords of 1978, which did nothing to change Israeli control of Jerusalem. (11) But what concerns us here is that the concerted policy of big oil in 1979 was closely aligned with their deep state allies in the Saudi government and the Safari Club, to the severe detriment of Americans and their nominal government, the beleaguered Carter administration.

The oil shock and gas shortage contrived by big oil in 1979, together with the October Surprise, were the chief factors in enabling the subsequent Reagan Revolution. This in turn opened the door for a new phase in “continuity of government” or COG plans, that were secretly prepared over two decades by planners like Donald Rumsfeld and Dick Cheney, and then implemented on 9/11.

1. Ibrahim Warde, The Price of Fear: The Truth behind the Financial War on Terror (Berkeley: University of California Press, 2007), 133. Cf. Robert Lacey, Inside the Kingdom: Kings, Clerics, Modernists, Terrorists, and the Struggle for Saudi Arabia (New York: Penguin Books, 2009), 66, 72, 76.

5. “In 1980, Shackley was set on putting his former boss, George Bush, in the  White House and possibly securing the CIA directorship for himself. Shackley volunteered his prodigious skills to Bush in early 1980. Though that fact has come out before, Shackley’s involvement in the Iran hostage issue, the so-called ‘October Surprise’ controversy, has been a closely held secret, until now” (Robert Parry, “Bush & a CIA Power Play—The Consortium,” Consortiumnews, http:// www.consortiumnews.com/archive/xfile7.html. Cf. “The CIA/Likud Sinking of Jimmy Carter,” Consortiumnews, June 24, 2010, http://www.consortiumnews .com/2010/062410.html: “Inside the CIA, Carter and his CIA Director Stansfield Turner were blamed for firing many of the free-wheeling covert operatives from the Vietnam era, for ousting legendary spymaster Ted Shackley, and for failing to protect longtime U.S. allies (and friends of the CIA), such as Iran’s Shah and Nicaragua’s dictator Anastasio Somoza.”

8. W.Carl Biven, Jimmy Carter’s Economy: Policy in an Age of Limits (Chapel Hill: University of North Carolina Press, 2002), 1: “There were more practical con- sequences of the Iranian crisis that tested the temper of the public; perhaps the most visible were a gasoline shortage and long lines of cars at gas stations caused by the cutoff of Iranian oil.” Cf. Daniel Yergin, The Quest: Energy, Security and the Remaking of the Modern World (New York: Penguin Press, 2011), 531: “The Iranian Revolution led to chaos in the oil market, rapid increases in prices, new gas lines, and a second oil shock, and the Carter administration started to come  unwound.” In 2007 I myself wrote, “By effectively restricting the access of Iran to the  global oil market, the Iranian assets freeze became a factor in the huge oil price increases of 1979 and 1981 (and thus an indirect cause of Carter’s electoral defeat in 1980)” (Scott, The Road to 9/11, 88). It was indeed a factor. But in the context I was arguing that the Iranian assets freeze attributed to Carter in 1979 was in fact part of a complex strategy arranged by advisers to the Chase Manhattan Bank. Prominent among these was Archibald Roosevelt, a former CIA officer and col- league of Copeland, whom Parry also accuses of involvement in the Republican October Surprise (Scott, The Road to 9/11, 91; Parry, Trick or Treason, 49, 51, 257).

11. Robert Lacey, The Kingdom: Arabia & the House of Sa’ud (New York: Avon, 1981), 451–55: “Crown Prince Fahad decided he must distance himself from Washington. In February 1979 he cancelled a trip he had scheduled to meet President Carter in the following month” (452). In ensuing months of negotiations, Saudis first increased production in late 1979 and then increased their oil price in 1980. At issue also was the Saudi desire to acquire AWACS (airborne warning and control system) aircraft, which, as we shall see in chapter 10, were not supplied to them until under Reagan (Ottaway, The King’s Messenger, 42–47).