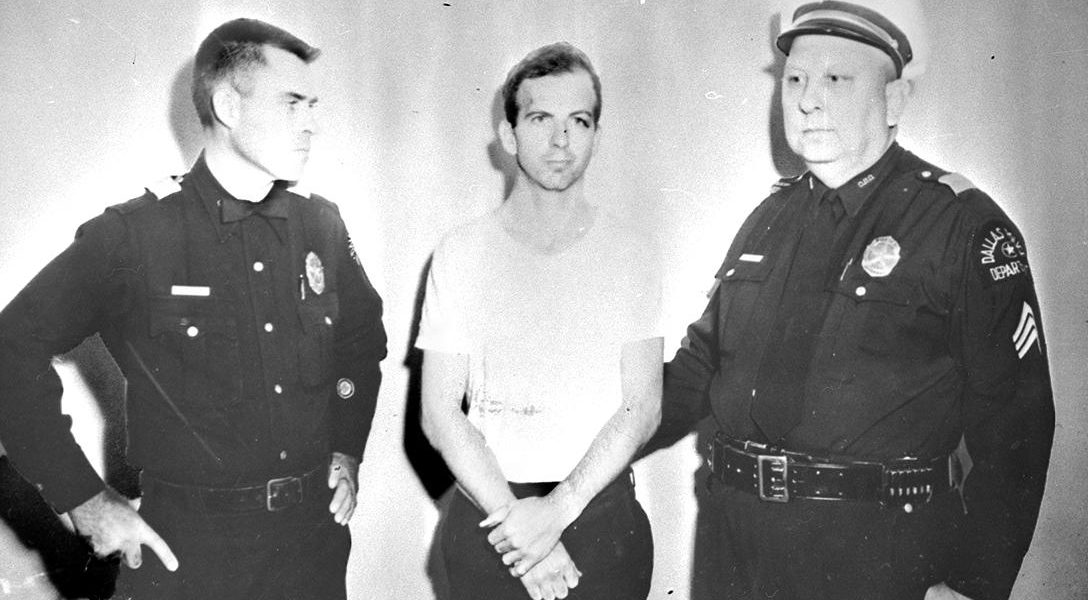 When John F. Kennedy was assassinated on November 22, 1963, the United States lost more than its president. It lost its innocence. The subsequent investigations into the young president’s killing raised more questions than they answered — and caused Americans to lose faith in their government. Indeed, for many people in the US and across the world, the assassination marked the point at which their fundamental perceptions changed.

Just after the Warren Commission released its report on the assassination, the level of public trust in government was at 77 percent. A decade later it had plummeted to less than half that (36 percent).

Kennedy’s death and the circumstances surrounding it gave birth to a movement. This movement, composed of all kinds of people, is dedicated to investigating the story behind the story, to exposing the power networks hidden beneath surface events. These machinations have been dubbed “Deep Politics.” Those who study it believe there is much more to national and world events than what the public is told by government officials and evening newscasters — and, as you will see, Peter Dale Scott proves it.

On the occasion of the anniversary of Kennedy’s assassination, WhoWhatWhy is pleased to present excerpts from Chapter 2 of Scott’s latest work — Dallas ’63: The First Deep State Revolt Against the White House by Peter Dale Scott (Open Road Media, September, 2015).

Oswald, Russia, and Cuba: How the Managed Oswald Stories Led to the Warren Commission

As noted earlier, the DFS played a central role, along with the CIA, in the management of conspiratorial stories about Oswald in Mexico, including the false Oswald-Soviet intercept. The key to this procedure, as I argued in Deep Politics, was a twofold process. “Phase One” put forward the phantom of an international plot, linking Oswald to the USSR, to Cuba, or to both countries together. This phantom was used to invoke the danger of a possible nuclear confrontation, which induced Chief Justice Earl Warren and other political notables to accept “Phase Two,” the equally false (but less dangerous) hypothesis that Oswald killed the President all by himself.

This book affords a close-up look of the genesis of the Phase-One story, and how it was first promoted and then defused by the CIA. Michael Beschloss has revealed that, at 9:20 AM on the morning of November 23, CIA Director John McCone briefed the new President. In Beschloss’ words: “The CIA had information on foreign connections to the alleged assassin, Lee Harvey Oswald, which suggested to LBJ that Kennedy may have been murdered by an international conspiracy.”[1] (It is not certain whether the conspiracy McCone referred to on November 23 involved Cuba or the Soviet Union.)

“McCone told me he gave the attorney general a routine briefing on CIA business and swore that Castro’s name never came up…. Sources would later tell me that McCone anguished with Bobby over the terrible possibility that the assassination plots sanctioned by the president’s own brother may have backfired.”

It would be wrong, however, to think that the CIA cover-up was limited to defusing this “Phase-One” impression of an international conspiracy. The CIA, by covering up the falsity of the alleged Oswald phone call to the Soviet Embassy, actually helped strengthen a spurious supposed link between Oswald and an alleged Soviet assassination expert, Valeriy Kostikov.

“A CIA memo written that day reported that Oswald had visited Mexico City in September and talked to a Soviet vice consul whom the CIA knew as a KGB expert in assassination and sabotage. The memo warned that if Oswald had indeed been part of a foreign conspiracy, he might be killed before he could reveal it to US authorities.”

An internal CIA memo of November 23, asserting the claim Oswald talked to Kostikov, bases it on an alleged phone intercept that, I shall argue, was almost certainly falsified.[2]

President Johnson appears to have had this information in mind when, a few minutes after the McCone interview, he asked FBI Director J. Edgar Hoover if the FBI “knew any more about the visit to the Soviet embassy.” [3]

But widely scattered clues suggest that the US Government was thinking of a Cuban connection to Oswald even before the Soviet one. Already on November 22 the FBI was reporting a claim never mentioned in CIA records: that the false Oswald-Soviet phone call was made by Oswald while telephoning “from the Cuban Embassy.”[4]

FBI Agent James Hosty, who handled the Oswald file in Dallas, has written that he learned later from two independent sources that at the time of Oswald’s arrest, “fully armed warplanes were sent screaming toward Cuba. Just before they entered Cuban airspace, they were hastily called back. With the launching of airplanes, the entire US military went on alert.”[5]

These planes would have been launched from the US Strike Command (USSTRICOM) at McDill Air Force Base in Florida. We have a cable from US Army Intelligence in Texas, dated November 22, 1963, transmitting a false report to the Strike Command that Oswald had defected to Cuba in 1959 and was “a card-carrying member of the Communist Party.”[6]

As discussed below, these allegations are incompatible with the present “Phase-Two” account of Oswald’s life, but were corroborated at the time. At 4:00 PM on the afternoon of November 22, Hoover told Bobby Kennedy that Oswald “went to Cuba on several occasions, but would not tell us what he went to Cuba for.”[7] (There is nothing in current FBI files on Oswald, as released to the public, to suggest either that Oswald had visited Cuba, or that he had been interrogated about such visits by the FBI.)

We know from other sources that Bobby Kennedy, on the afternoon of November 22, was fearful of a Cuban involvement in the assassination. Jack Anderson, the recipient of much secret CIA information, suggests that this concern may have been planted in Bobby’s head by CIA Director McCone.

“When CIA chief John McCone learned of the assassination, he rushed to Robert Kennedy’s home in McLean, Virginia, and stayed with him for three hours. No one else was admitted. Even Bobby’s priest was turned away. McCone told me he gave the attorney general a routine briefing on CIA business and swore that Castro’s name never came up…. Sources would later tell me that McCone anguished with Bobby over the terrible possibility that the assassination plots sanctioned by the president’s own brother may have backfired. Then the following day, McCone briefed President Lyndon Johnson and his National Security Advisor McGeorge Bundy. Afterward McCone told subordinates — who later filled me in — what happened at that meeting. The grim McCone shared with Johnson and Bundy a dispatch from the US embassy in Mexico City, strongly suggesting that Castro was behind the assassination.”[8]

Such dispatches did emanate from the Mexico City embassy, although we know of none as early as November 23. Three days later the Ambassador, Thomas Mann, the CIA Station Chief, Winston Scott, and the FBI Legal Attache, Clark Anderson, enthusiastically promoted wild allegations that Oswald’s act had been plotted and paid for inside the Cuban Embassy.[9] We know that McCone was wedded to this story, and continued to share it confidentially even after its narrator, the Nicaraguan double agent Gilberto Alvarado, recanted it on November 30.

The publicly released CIA record shows no trace of any linkage between Oswald and Cuba from Mexico until late November 23, long after McCone saw the President. But as we shall see this absence is itself suspicious, indeed hard to believe. There are too many loose clues that CIA Headquarters already had heard more about Oswald and Cuba than the purportedly complete record of CIA cables would account for. This would suggest that the record has been smoothed over to efface any “Phase-One” trace of a credible Cuban implication.

For example, one of the CIA officers in Mexico City who worked on the pre-assassination Oswald file “was certain that a second cable reporting Oswald’s contacts with the Cuban Embassy had been sent to Headquarters prior to the assassination.”[10] But there is no surviving CIA trace of any reason on November 22 to link Oswald, or the assassination, to Cuba, or possibly covert action against Cuba.

The FBI, in contrast, has now released a November 22 memo that already linked Oswald to the Cuban Embassy in Mexico:

“By Secret teletype dated 10/10/63 CIA advised … that a sensitive source on 10-1-63 had reported that Lee Oswald contacted the Soviet Embassy … inquiring whether the Embassy had received any news concerning a telegram…. (The Legal Attache in Mexico advised 11-22-63 that this was a telephone call made from the Cuban Embassy to the Soviet Embassy and a transcript thereof is being forwarded.)”[11]

There is no known corroboration for the Legal Attache’s claim on November 22 that the call was made from the Cuban Embassy. However this early mention of the Cuban Embassy suggests that the FBI in Mexico City may indeed have had its own sources of information, including both intercepts and informants. (It is now officially admitted that the CIA had penetration agents inside the Cuban Embassy, and the FBI may have as well.)[12]

Perhaps the strongest indication of deeper FBI knowledge is a CIA memo of December 11; this argued against the public release of the first FBI report on the case, “because the Soviets would see that the FBI had advance information on the reason for Oswald’s visit to the Soviet Embassy.”[13]

It is commonplace now to attribute the cover-up to early reports about Oswald and Cuba. For example, Jack Anderson suggests that a cover-up was ordered by Johnson himself, on the basis of what McCone told him on November 23 about Mexico City. According to Anderson, McCone argued that Nikita Khrushchev was on the ropes inside the Kremlin, humiliated over backing down … during the Cuban missile crisis. [This was indeed true, as his ouster in 1964 would show.]

If Castro were to be accused of the Kennedy assassination, Americans would demand revenge against Cuba, and Khrushchev would face another Cuban crisis…. This time he might do something reckless and provoke a nuclear war, which would cost forty million lives. It was a staggering figure that the new president repeated to others.[14]

Telephone transcripts in the LBJ Library confirm that LBJ used this argument to coerce Senator Richard Russell into serving on the Commission.[15] Chief Justice Earl Warren told William Manchester that Johnson persuaded him to lead the Warren Commission by raising the same threat of war against Castro and Khrushchev:

[1] Beschloss, Taking Charge, 23n, citing the National Archives. To my knowledge, no other researcher has yet discovered this memo. Cf. Chapter 3.

[10] House Select Committee on Assassinations, Staff Report, “Oswald, the CIA, and Mexico City” (“Lopez Report”), https://www.maryferrell.org/mffweb/archive/viewer/showDoc.do?mode=searchResult&absPageId=68632, 174-75. On November 22 a State Department cable from Mexico City, announcing that Mexico had closed its US border in response to the assassination, was distributed inside the Mexico City CIA Station to only three people. The two first were the Station’s Chief, Winston Scott, and Deputy Chief, Alan White. The third was David Phillips, in charge of covert action against the Cubans (State Cable 269 of 22 November 1963, NARA #104-10015-10309).

[12] As re-released, the Lopez Report talks of reporting on Cuban Consulate employee Silvia Durán “from one of the Station’s penetration agents, LI[redaction, “crypt”], at the Cuban embassy” (Lopez Report, 199; cf. 154). The context of the Lopez Report reveals that the penetration agent was Luis Alberu Souto, also known as LITAMIL-9 (NARA #104-10110-10192). When the HSCA tried to interview Alberu in Mexico, he was shielded by Mexican authorities until they left. For more on Alberu as LITAMIL-9, see Bill Simpich, State Secret, Chapter 3, http://www.maryferrell.org/wiki/index.php/State_Secret_Chapter3.

[15] [LBJ:] “We’ve got to take this out of the arena where they’re testifying that Khrushchev and Castro did this and did that and kicking us into a war that can kill forty million Americans in an hour” (Beschloss, Taking Charge, 67).