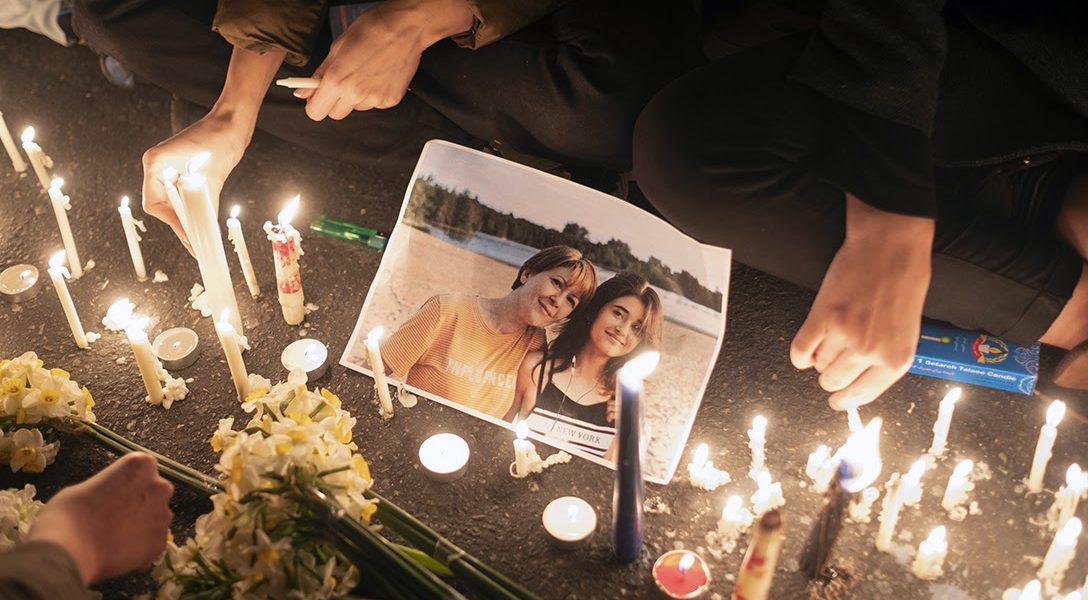 University students light candles next to a portrait of people who died in the attack on Ukraine International Airlines flight 752. Photo credit: © Morteza Nikoubazl/NurPhoto via ZUMA Press
Government Integrity

Some Clarity on Flight 752

This week’s emergence of a new video showing that two missiles, not one, brought down Ukraine International Airlines Flight 752 on January 8 sheds a bit more light on a mystery that we identified in the immediate aftermath: How it was that someone caught on camera a presumably unexpected missile strike at 6 AM.

The video released by the New York Times just after the tragedy is clearly from a handheld camera. That raises a question: Did whoever took it know what was about to happen? If not, why was someone video-recording a dark sky at 6 AM? If yes, what does that say about the official Iranian explanation that the strike was an accident?

The new video, released on Tuesday, was taken by a mounted security camera that just happened to be pointed toward the ascent path of both missiles, and recorded them striking the plane.

That there were two missiles bolsters the likelihood that the launch or explosion of the first alerted the videographer, who responded in time to capture the second strike. If that’s so, there’s no need to assume the videographer knew anything in advance.

The new video shows that the first missile was airborne for about 20 seconds before striking the plane. The second missile struck 23 seconds later. If the videographer happened to notice the first missile launch, he or she could have had as much as 40 seconds to capture the second strike. Given the tense situation around Tehran, it’s reasonable to assume that local residents — likely fearing a US response to the barrage of Iranian missiles launched at US bases in Iraq hours earlier — were on high alert for anything that might resemble a missile.

Tehran initially denied involvement in the attack, but conceded last weekend that an Iranian missile brought down the plane, albeit by accident. UK and Canadian officials insisted at first that only one missile was involved. US intelligence officials concluded that there were two — as did Austria-based military-aviation expert Tom Cooper.

“Why would anybody pull out a smartphone and start taking a video of nothing — on a black sky in the middle of the night?” said Cooper in emailed comments. The first strike must have alerted the videographer, he says. “He saw a flash, pulled out his smartphone and started taking that video. That usually takes two to five seconds.”

(The website Aviation Geek Club quoted Cooper two days after the strike as saying he drew his conclusions from whoever posted the video. Cooper said Thursday that the website was wrong, and that he drew his own conclusions.)

But how do we know the strike in the Times video is the second and not the first, since there is no sign that the plane is on fire just before that missile struck?

Cooper says that not every strike by a Russian-made Tor M1E surface-to-air missile (SAM) — the sort used last week — causes a fire. The warhead is designed to detonate near the aircraft, riddling it with shrapnel, but doesn’t necessarily set the target aflame.

“Thus, I think that what’s visible on the [Times] video was the second missile (and hit),” said Cooper.

So says Eliot Higgins, founder of the investigative website Bellingcat. “We strongly believe what we’re seeing in the video is the second missile strike,” he says via email, “so it’s reasonable to assume he’s filming because he saw that first.”

It remains a mystery who actually took the Times video. Bellingcat’s Higgins suspects it was a night watchman, based on the location.

Whoever it was, Iranian media reported on Tuesday that its Revolutionary Guards had arrested the person, but they did not provide an identity or say why he or she was arrested. The BBC reported that the person — one of several people arrested in relation to the incident — could face “charges related to national security.”

But Nariman Gharib, the London-based Iranian journalist who obtained the clip from the videographer and made it available to the Times, tweeted on Tuesday that the person who recorded it is safe and that the Revolutionary Guards “have arrested the wrong person” and are “orchestrating another lie.” He told the Canadian Broadcasting Corporation news show The National on Tuesday that he had spoken to the person that morning.

Gharib — whom the Committee to Protect Journalists describes as a social media analyst for Manoto, a Persian-language satellite news channel based in London — said he obtained the video by putting out a request for information related to flight 752 on Telegram, a cloud-based messaging service.

To be sure, there remain questions about the shoot-down. For example, who got the security-camera video to Western media? Buzzfeed News cited someone named Javad, whose surname it is withholding, as having uploaded the video to YouTube on January 14 after receiving it from a friend. To protect the friend, Javad declined to say precisely where the video was taken, though confirmed that it was captured from a rooftop near the village of Bidkaneh, 17 miles northwest of the airport.

Another question: Why would the Iranians fire at a passenger plane that they must have known would be flying out of nearby Imam Khomeini International Airport? Flight 752, which departed at 6:12 AM, was the 10th to leave on the morning of January 8, local time.

Joe Quinn of Signs of the Times dismisses the notion that insufficiently trained missile operators panicked. He suggests the missile crew was fooled into believing that the Ukrainian passenger jet was an incoming missile by hackers “spoofing” the missile system. In military terms, spoofing means “capturing enemy radar signals and sending them back in an altered format in order to confuse the radar operator about what he is seeing,” writes Quinn.

It’s unclear who would want to fool the Iranians into attacking a passenger airliner. There’s little doubt whom the Iranians suspect. Quinn suggests looking at “those who have been most vocal about the Iranian threat over a long period of time, have the most to gain from making Iran ‘look bad.’” There are indeed “electronic warfare” (EW) systems designed precisely for spoofing purposes, and as Quinn notes, the US Navy and Air Force own them.

Cooper says Quinn’s spoofing theory is “perfectly plausible and well substantiated,” but he has reservations. For starters, he questions how the Revolutionary Guards could neglect to secure a missile system against spoofing. It was the third in the world to establish a cyber division, and it develops SAM systems in “very close cooperation” with China. While Iran procured the Tor system before it contained anti-spoofing features, it should have known it needed to “harden” them against cyberattacks.

Distance is also an issue. Cooper says spoofing from US bases in Iraq or in countries neighboring Iran would be difficult. All are at least 270 miles from Tehran, and even an airborne spoofing operation from over the Persian Gulf would be at least 400 miles away.

“From what I know, spoofing from such ranges would take awesome amounts of energy, really an extremely powerful emission,” says Cooper. “Somebody would have to notice that.”

As an example, he notes, US Navy ships passing through the Strait of Hormuz emit such strong jamming signals that they disable cell phones and TV signals along the Iranian coast, but not in Tehran. “The reason is the distance and the Earth’s curvature,” he says.

It’s possible for the US to insert special forces in Iran, a vast country of rugged terrain, with advanced EW systems that are small enough to carry.

“They only need a good source of energy,” Cooper says. “But, why do that? Why launch such a complex operation to spoof a single SAM site? That part is not making sense.”

There are simpler explanations, Cooper suggests: The missile crew could simply have fallen asleep, then suddenly woke to see an unfamiliar dot on its radar screen. Or the operators had to reboot a system that had crashed or disconnected — “as it does quite often,” according to Cooper — only to see an unfamiliar signal. That would be alarming at a moment when the crew was not expecting a passenger flight — flight 752 left 57 minutes after it was scheduled to.

Says Cooper: “Put yourself into their shoes: ‘check the flight schedule from Imam Khomeini  airport’… ‘it’s not on schedule’… ‘check the IFF [identification friend or foe]’… first response is negative (or wrongly read)… ‘damn, it’s turning towards that missile-testing base, further north’…‘OK, open fire’…”

There is a history of passenger airliners being shot down through military error. The US Navy brought down an Iranian passenger liner over the Strait of Hormuz in 1988, killing 290 people. A Soviet fighter plane shot down a Korean airliner over the Sea of Japan in 1983, killing 269.

Some analysts say the launch crew should have known that the flight was a jetliner, not a missile, by the signal from the plane’s automatic dependent surveillance broadcast (ADSB), which allows radar to track the plane. But the Tor system entered service long before ADSB existed, says Cooper. “I doubt the Tor M1E could even receive that signal, not to talk about reading it,” he says.

What’s more, he says, Revolutionary Guards SAM units operate on their own, in a decentralized system bereft of a real-time nationwide radar picture.

“Spoofing makes sense, and is perfectly possible,” says Cooper, “but there is no evidence for it. It doesn’t take a lot for the Tor M1E to screw up on its own, even without human interference.”