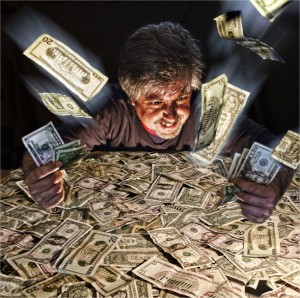 How Silicon Valley and Wall Street Investors Profit From 300% Interest This is the first of a cooperative series of investigations between WhoWhatWhy and the Bureau of Investigative Journalism, a British not-for-profit in depth journalism organization.

You’d think a crackdown on so-called “payday” lenders in 22 states over the last eight years would have put a lot of these usurers out of business. But the multi-billion dollar industry has found new ways, and new places, to thrive. Today, many of these firms, charging cash-strapped customers interest rates as high as 700 percent, can be found operating just out of reach of state and federal regulators—on Native American tribal lands or overseas in the United Kingdom and elsewhere.

As WhoWhatWhy has discovered, big name Wall Street and Silicon Valley investors are backing these businesses as they seek high profits by lending money to people who lack the financial savvy to understand the hole they are putting themselves in.

Payday lenders have always been a clever bunch. In the 1990s, the companies successfully persuaded state lawmakers around the country to allow “carve-outs” for huge interest rates. In other words, they got their triple-digit interest rates explicitly written into state laws.  Business boomed—at least until 2006.

That year, the U.S. Department of Defense published an alarming study showing that many service members had become trapped in endless cycles of payday loan debt. Congress stepped in and passed a law capping interest rates to members of the military at 36 percent. Still a high figure, to be sure, but much lower than the payday loan industry’s average of 300 percent.

That Congressional intervention marked a turning point. States around the country followed suit. “Since 2005, no state has legalized payday loans to come into its borders, and a number of states that used to allow it, now do not,” says Diane Standaert of the Center for Responsible Lending, which tracks the industry. “The trend since 2005 has been to crack down on the payday loan debt trap most effectively through the implementation of a cap on interest rates.”

As state regulators and legislators have cracked down, some of the biggest payday lenders—such as CashAmerica, Speedy Cash and First Cash Financial—have definitely felt the squeeze. They’ve closed some of their storefronts, and loan volume is down industry-wide. But like the old carnival game of Whack-A-Mole, the same lenders are popping up elsewhere.

The Bureau of Investigative Journalism in the U.K has reported extensively on how American payday lenders are now serving up the same dubious deals…to British citizens. As Tom Warren of the Bureau reported, “Controversial payday loans companies, some charging interest rates as high as 7,000%, have experienced phenomenal growth since the start of the recession.” You can imagine the money involved. The publicly traded CashAmerica of Fort Worth, Texas, reported in its most recent public filings that nearly half its revenue—48.9 percent—came from consumer loans. In dollar terms, that’s well above the 700-million mark for last year alone. In the U.K., the company offers loans under such names as “QuickQuid” and “Pounds to Pocket” at triple-digit interest rates. CashAmerica also offers loans in Australia and Canada under the name “DollarsDirect”.

But the migration of these payday lending operations overseas doesn’t mean that the industry has given up on the American market. Far from it. Think Finance, another Texas-based firm operating in the U.K., is among the companies that have found a new way to profit, right here at home. The company has been so successful in its new approach that Forbes ranked it second among “America’s Most Promising Companies” in 2013. Because it’s privately owned (more on that below) it’s impossible to know exact revenue figures, but Think Finance’s website touts its Forbes ranking, saying, “$200 million of revenue or more. And we’re just getting started.”

A few years ago, when Think Finance went by the name “ThinkCash,” the firm boasted that its loans were “25 to 75% lower” than traditional payday loans. Hardly a bargain, that, considering that its advertised rate at the time was 324.1% APR.

If frontier-mentality Americans foisting themselves on the poor back in the “old country” isn’t enough, now they’re pressing the natives of the new land into the shady scheme as well.

In 2010, as new state laws began to pinch the payday lending industry, ThinkCash changed its name. It became Think Finance, and the firm began offering a “technology platform” to a new groups of “partners”: Native American tribes. How does the tribal deal work? Think Finance provides— at a publicly undisclosed cost— its “technology platform” to firms incorporated on Native American lands. Those tribal firms then market and sell payday loans—but not to tribal members. Instead, the program goes online to pitch everyday Americans around the country, even in states that limit or ban such loans.

The point, says Standaert, is to cloak a lending operation in the guise of tribal sovereignty. This is for “the express purpose of asserting the tribes’ immunity from suit.” It’s simple: Under federal law established in 1978 in the case of Santa Clara Pueblo v. Martinez, Native American tribes generally can’t be sued.

Just how much the tribes benefit from these arrangements is hard to say. But in some cases, there is evidence the tribal firms have operated as little more than “fronts” for non-tribal payday lenders.

New York State recently challenged this immunity in an action against two firms operating with Think Finance. Those firms are Great Plains Lending, LLC, run by the Otoe-Missouria Tribe in Oklahoma, and Plain Green, LLC, run by the Chippewa Cree out of Montana. The state argued that such immunity should not apply. After all, customers in New York—which has never allowed payday loans to begin with—were being sold high-interest loans by two tribes halfway across the country.

The court agreed with the state’s argument. It found that tribal companies were not immune from being sued in the case. But while both tribal firms have since stopped pushing loans on New York customers for now, the companies are appealing and continue selling to customers in other states.

Worth noting is that during the proceedings, tribal lawyers made arguments on behalf of the decidedly non-tribal Think Finance.

What do the tribes get out of this? According to a newsletter distributed to Chippewa Cree tribal members by Plain Green, the company claims it generated about $2 million in revenue during its first six months in business, and $896,000 was the “tribal share.” It’s not possible for WhoWhatWhy to verify that cut, given that the companies are privately held.

But if Think Finance’s deal with its Native American partners offered the tribes a 44 percent take, other companies haven’t been anywhere near as generous. One such payday firm—AMG Services—was operating with several tribes until it was sued recently by the Federal Trade Commission for “deceptive collection tactics” and violations of “Truth in Lending.”

A key figure in that lawsuit was a man named Scott Tucker. He’s well known among auto racing fans as a current driver of the red number 55 Ferrari for Level Five Motorsports in the United SportsCar Championship. Less known is that he also spent a year in in Leavenworth prision for felony mail fraud in the early 1990s. In the AMG case (unrelated to Tucker’s earlier crime), Denver District Judge Morris Hoffman left no room for misunderstanding. He noted that the tribal payday lending firms were not the real beneficiaries of the scheme:

“Nothing is more telling as far as assessing true owners than to follow the money, and the fact that Tucker put up 100% of the capital and enjoyed 99% of the payday revenues makes it evident that Tucker, and not the tribal entities, continued to own these businesses.”

The FTC settled its case against Tucker and AMG without anyone admitting wrongdoing. And needless to say…he’s still racing the Ferrari.

Payday lending companies argue that there is a shortage of credit available to low-income borrowers, and that these loans therefore serve a purpose for brief, occasional needs. But there’s the rub: numerous studies show that most borrowers take out more than one loan, and end up being trapped in a debt spiral at exorbitant interest.

“A fundamental concern with payday loans and their impact is the inherent disregard for a borrower’s ability to repay the loan,” Standaert told WhoWhatWhy.  “Because payday lenders require direct access to a borrower’s bank account, they get first dibs to a borrower’s paycheck on payday—taking priority above all other obligations [which] borrowers might have that month. This is core to the payday business model, and leads to an ensuing cycle of debt from which it is nearly impossible to escape.”

That “ensuing cycle of debt” is apparently what some lenders actually want. While CashAmerica’s website warns potential customers that “Payday advances are not recommended as long‐term financial solutions,” the company’s CEO seemed to have a different business model in mind when he spoke at a 2007 conference with Wall Street investors. “The theory in the business,” Dan Feehan said, “is you’ve got to get that customer in, work to turn him into a repetitive customer, long-term customer, because that’s really where the profitability is.”

That “profitability” is exactly what the payday loan industry’s Wall Street and Silicon Valley backers are chasing. And the big money is showing no signs of letting up soon.