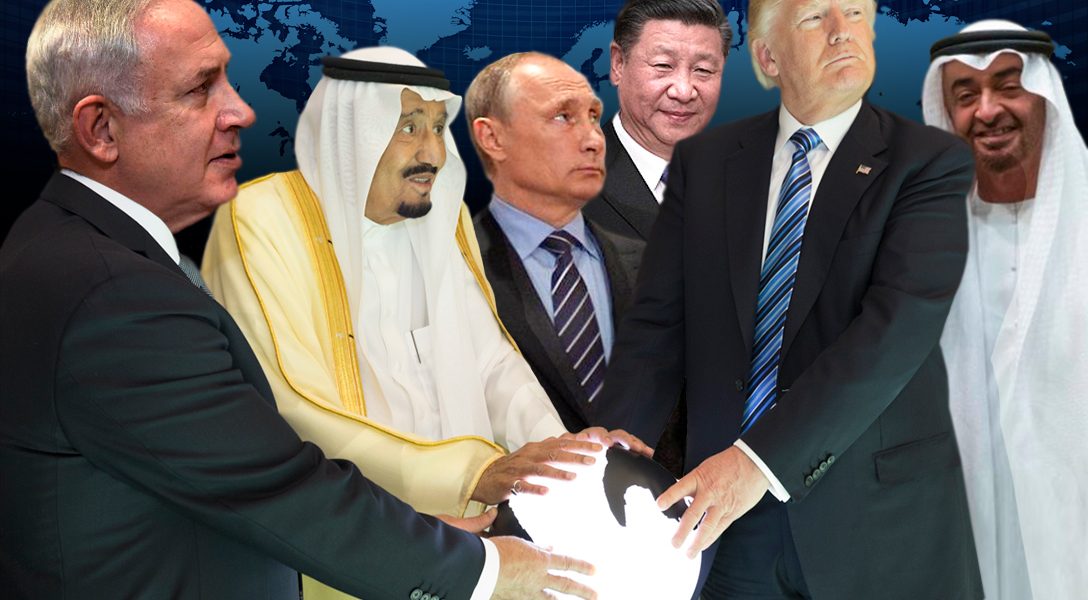 Russia, Saudi Arabia, UAE, Israel: What the Hell Was Going On at Trump Tower?

In recent days the so-called Russiagate affair seems to have splintered into a million different pieces. It’s no longer just the Russians who were romancing Donald Trump and those around him with promises of helping him get elected. Now we can add the United Arab Emirates (UAE), the Saudis, Qataris, and Israelis.

Each party was apparently taking a number for their turn to place an order at the All-You-Can-Eat Trump Deli.

Most folks don’t pay much attention to the ever-changing diplomatic and geopolitical currents flowing across the planet. So, as new revelations bring new players into the metastasizing scandal that engulfs this administration, we squint our eyes and wonder “what the f… ”

Putin understood he didn’t need a compromising videotape to get what he wanted. All he needed to do was flatter and treat Trump like the big shot he wanted everybody to think he was.

So let’s pause a moment and take a close look at what drew such a manic and motley crew of outsiders into our national election and White House.

We all know about this meeting now. And we understand that its real purpose was not to discuss US adoptions of Russian orphans, but to try to convince Trump to repeal the Magnitsky Act sanctions against Russia signed into law by President Barack Obama. This meeting was an amateurist attempt by both sides. The Trump folks thought they were getting dirt on Hillary Clinton from the Russians and the Russians didn’t deliver. Both sides walked out empty handed.

Don Jr. Meets Emissary for the Saudis and Emiratis at Trump Tower (August 3, 2016)

Donald Trump Jr. held another unusual meeting before the election, this time with an even stranger cast of characters — including Erik Prince, a professional soldier of fortune and former head of Blackwater; George Nader, a Middle East lobbyist who said he was there representing the crown princes of the United Arab Emirates and Saudi Arabia, and Joel Zamel, Nader’s business partner, who was there to pitch a social media platform to aid Trump’s presidential campaign. In many ways this second Trump Tower meeting was more interesting, and troubling, than the first. Both Nader and Zamel are practiced players in the byzantine world of Middle East politics. The social media company they were pitching to Donald Jr. was full of former Israeli intelligence officers and analysts. Think of it as Cambridge Analytica on steroids. They were offering to fill US social media with posts demographically targeted to shore up support for Trump and diminish support for Clinton.

What strange bedfellows, one might think… unless of course you do think about it a bit. At the time, all parties — Saudi Arabia, the UAE, and Israel — had a common problem: Iran. All three wanted someone in the White House who would side with them against Iran, and Trump had already signaled his own animosity toward the regime in that country.

China realized as well that Trump is not moved by principles, but transactions.

Nader and Zamel’s clients, Saudi Arabia and the UAE, were each terrified that the rise of Iran might lead to Shiite rebellions in their own countries and their own demise. Also, despite the occasional trash-talk, both the Saudis and UAE get along quite well with Israel behind the scenes.

And, while Donald Jr. downplayed the second Trump Tower meeting as he did the first, his father has in fact more than delivered for those three countries, by nixing the Iran nuclear deal, slapping sanctions back on Iran, and threatening “the strongest sanctions in history,” coming soon.

Nor did it end with just that one meeting. Here the Trump-Gulf States nexus meet the Trump-Russia nexus. Almost immediately after the election another member of that second meeting, Erik Prince, flew to the Seychelles in the Indian Ocean on a trip arranged by his clients, the UAE. The exact purpose of that trip remains clouded in intrigue and obfuscation. But the cast of characters is telling. Prince met not only with UAE officials but also with one of Russian President Vladimir Putin’s bankers, Kirill Dmitriev. But what the hell does Russia have to gain from the Trump-Gulf matter? Well, plenty. Russia was, and remains, deeply invested in Syria and its President Bashar al-Assad, alongside Assad’s other chief benefactor, Iran. Iran? Again, heads explode. Wait, didn’t we just say that the Saudis and UAE are sworn enemies of Iran? And Russia is, by contrast, friendly with Iran. What gives?

Well, it is true the Russians are friendly with Iran. But they themselves are threatened on their southern flank by radical Islamists who are also opposed by Iran. So their cooperation with Iran is essentially an “enemy of my enemy is my friend” thing.

If Arabs in that part of the world understand anything, it’s that alliances are transactional, not personal. The Saudis and UAE understand that Russia has its own agenda, one that has little or nothing to do with them, or that threatens them less than Iran does.

So what is Putin up to, playing all these different, even apparently contradictory hands all at once? Putin’s prime directive since taking power has been to make Russia not just a relevant world power again, but a decisive power. He did that in Syria, winning where the US foundered. He did that in the Crimea, where he stuck the Russian flag in Ukrainian soil and made it stick.

And, more recently, Putin has seen some dividends on the sanctions issue, as Trump has refused to impose all the additional sanctions on Russia passed months ago by Congress.

The Russian president’s main strategy is to sow confusion, frustration, suspicion, and discord within Western democratic societies. His goal is to push NATO back away from Russia’s borders. He knows he cannot accomplish that militarily. So he is doing it through what Russian strategists call “war by other means.” His first major invasion in that war was the Brexit vote and the 2016 US presidential election. He has since fought other battles, with mixed success, in some Western European countries, as well as countries once part of the Eastern bloc, with more success.

So from Putin’s point of view, while that first meeting in Trump Tower didn’t quite pan out as intended for Russia, it did show a willingness to play along on the part of Trump and his circle. Putin looked into Trump’s soul and saw a man who could be suckered and strung along: a useful fool. Putin understood he didn’t need a compromising videotape to get what he wanted. All he needed to do was flatter and treat Trump like the big shot he wanted everybody to think he was.

China, too, has had no illusions about how Trump operates. China realized as well that Trump is not moved by principles, but transactions. Which explains Trump’s backtracking on the sanctions he imposed on the high-tech Chinese manufacturer, ZTE, just days after we learn that the Chinese government was fronting half the cost, $500 million, for the construction of an enormous Trump-branded resort in Malaysia. In China for trade talks at the time was US Treasury Secretary Steven Mnuchin, who announced a day later that broader sanctions against China were now “on hold.”

None of Trump’s transactional diplomacy was lost on one other world leader. If there’s anything Trump relishes more than money, it’s adoration and fame. So North Korea’s Kim Jong-un baited his hook with the offer of a big-shot summit, and Trump bit like the sucker he is. Over the next few weeks, Kim played Trump like a guppy on a 100-pound line, until more recently cutting bait and letting Trump float to the surface belly up.

So folks, that’s what the hell is going on. While our traditional allies wonder if we’ve all lost our minds over here, Russia and China and various players in the Middle East and Gulf are lining up to kiss Trump’s plastic ring and pick his pocket while they undermine our democracy and institutions.