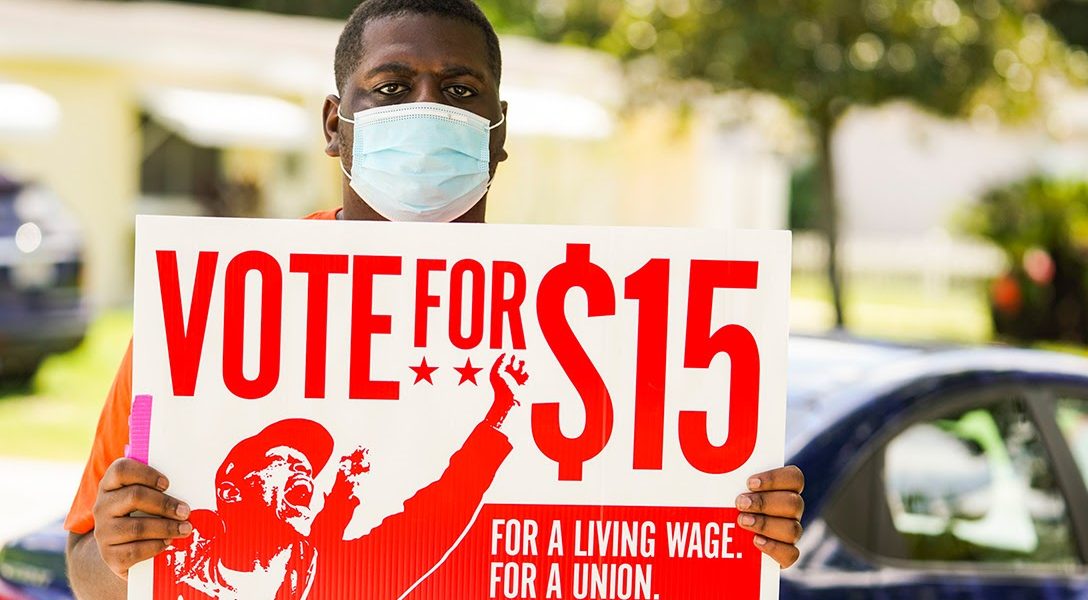 On Big Issues, Democrats Commit to Donors Over Workers

Defying expectations, the presidential race in Florida wasn’t even close. Joe Biden lost by more than 371,000 votes, picking up only 48 percent of the vote. But there was a clear progressive favorite among the electorate: Amendment 2, a ballot initiative raising Florida’s minimum wage to $15 an hour by 2026. It was one of Florida’s big winners in 2020, earning the vote of more than 60 percent of Florida voters on November 3.

It’s a big win for the labor movement. So one might think that state Democrats would have been falling all over themselves to support a measure that would not only motivate their base, but also broaden their appeal to independents and lower-income Republicans.

And at least on the surface, that’s what it looked like. While the Florida Democratic Party did officially endorse Amendment 2, state Rep. Anna Eskamani (D) points out that it didn’t firmly put the party behind it.

“I think there’s a difference between posting it on your website and aggressively using it as a messaging tool and also defining your opposition as being against it,” Eskamani told WhoWhatWhy.

In this election, the mixed messages many prominent state and national Democrats sent on economic issues crucial to blue-collar and low-income voters seem more intended to reassure key corporate donors rather than to win over those voters.

Eskamani said that large corporate donors to the Florida Democratic Party (FDP) — including the Florida Chamber of Commerce and restaurant and lodging associations, among others — played a key role in watering down the FDP’s support of Amendment 2.

Further compounding the problem were the mixed signals given by some of the party’s top leaders.

“Our state’s top Democrat, Agricultural Commissioner Nikki Fried, was quoted as not supporting the effort — and then quickly backtracked once there was a lot of backlash,” said Eskamani. “I think that is pretty indicative of a lot of Democrats that work really closely with corporations and receive donations from corporations and their affiliated political organizations.”

(Fried told the Tampa Bay Times in August that she was undecided on the issue and worried about its potential costs to business. Some critics claim the campaign donations she received from the sugar industry, which opposed Amendment 2, may have played a role in her stance on this issue.)

Political observers note that while Florida Democrats and the Biden campaign did support Amendment 2, they didn’t spend money or actively campaign for it. This was in sharp contrast to the Florida Republican Party, which made opposition to Amendment 2 a big part of its platform.

“Not anchoring ourselves aggressively with Amendment 2 and using it as a contrast was definitely not a smart move,” said Eskamani.

Nor was this the only ballot issue of the election cycle that involved large corporate donors and pocketbook issues.

Back in 2018, California Gov. Gavin Newsom (D) signed AB5, legislation which cracked down on employers who deliberately misclassified full-time employees as independent contractors, denying them many protections and benefits. The legislation was aimed at ride-sharing services Uber and Lyft. It would potentially cost Uber $500 million and Lyft $290 million a year. This year, Uber and Lyft — along with other gig companies, including DoorDash, InstaCart, and Postmates, which use millions of nonemployee drivers — ponied up a record-breaking $200 million in support of California’s Proposition 22, which effectively repealed most of AB5.

To be fair, the California Democratic Party did go on record as opposing Proposition 22. So did most of their top leaders, including Biden and Sens. Kamala Harris (D-CA), Elizabeth Warren (D-MA), and Bernie Sanders (I-VT). But as in Florida, voters received mixed signals from some top Democrats and people closely associated with top Democrats.

Fmr officials should not become corporate lobbyists, in letter or spirit. It’s an abuse of power + a stain on public service.

I don’t care if it’s a Democrat doing it (both parties do). In fact, that makes it worse – we’re supposed to fight FOR working people, not against them. https://t.co/r6DN9mwf3A

Barbara Boxer, one of California’s senators for 24 years and considered a stalwart from the progressive wing of the Democratic Party, served as a Lyft advisor. She publicly criticized AB5 and, in an editorial finding fault with the legislation, Boxer rehashed the corporate party line that many drivers want to be independent contractors.

Former “officials should not become corporate lobbyists, in letter or spirit. It is an abuse of power, a stain on public service. We’re supposed to fight FOR working people, not against them,” tweeted Ocasio-Cortez.

Nor was Boxer the only high-profile Democrat whose actions on this issue raised eyebrows.

Tony West, brother-in-law of Vice President-elect Harris, is Uber’s chief legal officer, and the public face of Uber’s resistance to Prop. 22. West is listed as one of Harris’s top political advisers. However, a company spokesperson was quick to insist that West never lobbied Harris, her office, or anyone from her campaign on this issue.

There were reports, however, that Maya Harris — Kamala’s sister and Tony’s wife — was lobbying allies to boost her husband’s candidacy to be attorney general in the Biden Administration, an office that has a huge impact on labor policy.

With Uber and Lyft outspending their opposition more than 10 to 1 in favor of Prop. 22, it may be that no amount of solidarity by Democrats could have triumphed against such steep odds.

But the support given by Boxer and West to Uber and Lyft may well have sent the voters mixed signals as to how firmly Democrats identify with working people.

And with the success of Prop. 22, clones of the initiative could potentially expand to other states, such as New York, New Jersey, Massachusetts, and Illinois.

“Prop. 22 showed that companies and big corporations could buy their way out of providing protections for workers under the law,” said Margaret Poydock, a policy associate at the Economic Policy Institute, a pro-labor think tank.

On both coasts, major ballot initiatives reinforce the argument that the Democratic Party is turning away from American workers. Nor does the incoming Biden administration show signs of shunning corporate influence.

Recent events have raised questions on how strongly a Biden administration would fight for two major proposals: establishing a robust public health option and allowing low-income families to set up affordable checking accounts through the US Postal Service. The strong opposition by private health insurance companies and Wall Street banks have placed the prospects for both in doubt.

Nor are these unpopular proposals. Recent polls have shown the public strongly in favor of these economic reforms. One survey of battleground districts found that 65 percent of all likely voters and 49 percent of all Republican voters were in favor of the higher $15 minimum wage rate. Surveys have also shown bipartisan support for postal banking and a public health option.

The will of Democratic national and state leaders to resist the pushback from large donors against these popular economic reforms may well determine whether they are ever enacted into law.

For Eskamani, the way forward is clear.

“We have to be more aggressive in demonstrating that we are the party of the working class,” she said. “We have to build a rainbow coalition around who we are and our values.”