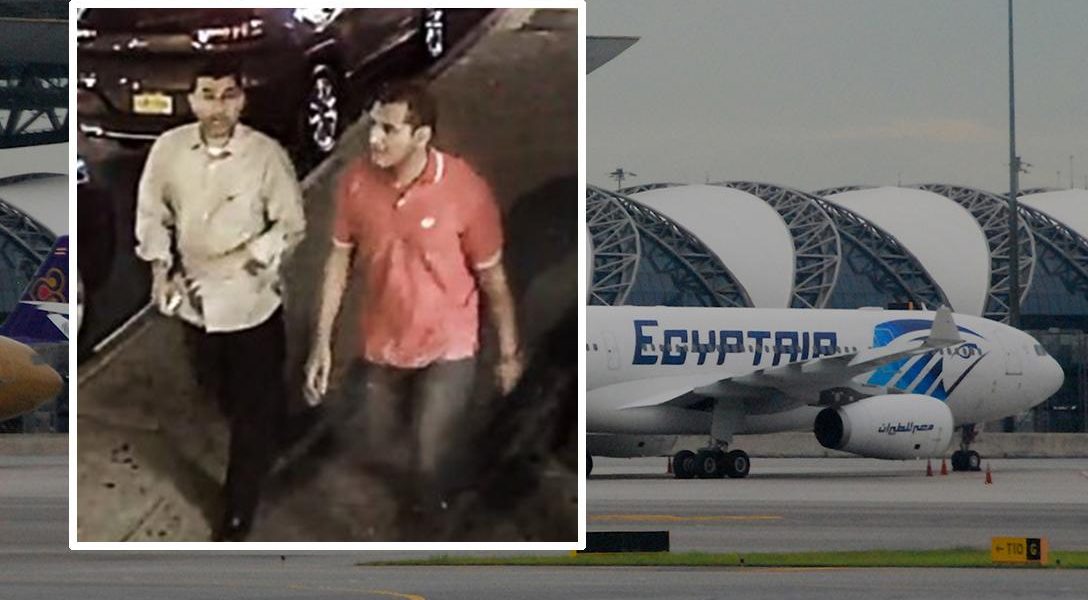 NY/NJ Bombing: The Curious Case of the Incurious Security Guards

Two men who were sought as witnesses in the bombing of the Chelsea neighborhood of Manhattan have been identified as a pair of EgyptAir “in-flight security officers.”

Hassan Ali and Abou Bakr Radwan, both Egyptian nationals whose photo was released by the FBI, are not considered suspects. Instead, we are told, they simply happened upon the travel bag containing the bomb and decided to take the piece of luggage, thereby disabling the bomb. They didn’t know what was in it until later.

Really? Two security officers who work for an airline based in Egypt, had no clue they were looking at an improvised explosive device?

The two men were identified after officials tracked their movements, via security cameras, back to the hotel where they were staying.

Mr. Ali “told me he saw it [the travel bag] and thought it was nice,” an EgyptAir official told The New York Times. “He opened the bag to check it out and found a pot.”

BREAKING PHOTO! Here is the second device found by a NYSP Sgt. At 27 street and 7 Ave. investigation is ongoing pic.twitter.com/x7o9Rr30I3

They left the “pot” on the sidewalk and walked off with the luggage. The pot was of course a pressure cooker wrapped in duct tape with a cell phone wired to the top.

Really? They had no idea what a pressure cooker stuffed in a bag might be used for?  One with a cell phone wired to the top?

Would they not have received some kind of training in the identification of suspicious devices? Had they not heard that pressure cookers, left in bags on the sidewalk, were used in the Boston Marathon bombing?

Based on the image of the men distributed by the FBI, officials determined that around the time of the explosion, the men were walking on W. 27th St., four blocks away from where the other bomb went off — on W. 23rd St. In other words, they likely heard the loud boom and still didn’t figure out what might have been the purpose of their lucky find.

Another strange thing is what the perpetrator used to “hide” the bomb. It’s hard to think of a piece of luggage that would guarantee more attention from scavengers in New York City than a Louis Vuitton travel bag — even if it was a cheap knockoff. Why disguise your explosive device in such a distinctive attention-grabbing piece of luggage?

A video of the two security officers making their find was released by law enforcement to NBC 4 New York. The video shows that the men got a good look at what was in the travel bag. It wasn’t just a quick glance. According to the video’s time stamp, the men spent more than a minute inspecting the bag’s contents. NBC 4 points out that “they take the device out of the bag, set it on the sidewalk, and then examine the top and bottom.”

For some reason, the FBI basically cleared Ali and Radwan of any wrongdoing before they even knew who they were, or had a chance to question them. “As airline security officers, have you had any training in spotting potential bombs?” “Have you ever heard of a pressure-cooker bomb?” “Why do you think a cell phone was wired to the pressure cooker?”

After the story broke, it didn’t appear that Egyptian officials were in any rush to interview them. When an official was asked if they had spoken to the officers, he said they had not — they couldn’t find the two men: “It was their day off.”

Would two Egytian nationals want to report finding a pressure cooker bomb to the NYPD? Visions of Guantanamo and Abu Ghraib must have flashed through their minds. Innocence, nor guilt make any difference in the way middle easterners are treated by the USG.

good points, except, egypt is in africa, not the middle east

Not to diss “Dutch,” but one of the biggest problems is the universal ignorance of Americans about geography (note I said “one”). The entire purpose of what passes for “education” today is to dumb down the coming generations as much as possible. So much easier to control than people who know important things and think for themselves.

Really interesting. Especially as I read they returned to Cairo the next day and were never interviewed.

This is always the story when you deal with a CIA/NSA setup. Remember the airport security around the child bomber?

Basically I was reminded of this story – Egypt chemist ‘not bomb suspect’, BBC 19 July 2005

Once again, the FBI is at the center of a story where they should have known/done/suspected something and looked the other way. Except, of course, when they are murdering a witness/suspect somewhere, as happened in the Marathon Bombing “investigation.”

Considering the genuine Louis Vuitton roll-on cases are $3,000 and up, one seemingly abandoned on the sidewalk would surely draw attention. Also odd: someone clever enough to make a bomb would be savvy enough to recognise the CCTV camera perched directly overhead and perhaps try to avoid being recorded placing the IED directly under it. Like the Boston Bombers, nobody in this event seemed to worry about being recorded.

After the Boston bombing suspects were shown making mundane purchases after the explosions,
I remember people saying how they must be monsters to act so remorseless. My thought was they acted casual because perhaps they had no reason to act otherwise, e.g., fear of being caught and prosecuted for starters.

Spies and law enforcement are, at least, criminally negligent after they sacrificed our civil liberties ostensibly for their protection.

It is truly unbelievable that the lone wolf’s own father rats him out as a terrorist, but yet the NSA and other spies would not track EVERYTHING he communicates while in the US, and while traveling numerous times in our war zones – at a higher level of scrutiny than you or I.

For instance, simple automated analytics would raise human alerts after he favorited jihad videos on his G+ account. Analytics would also automatically alert humans when he purchased I.E.D. components on eBay.

After 9/11 and Snowden, it is now completely unbelievable to blame “civil liberty protections,” which no longer exist, from keeping the trillion-dollar, privacy-robbing spying systems from automatically tracking this guy’s every move, and those of his associates.

It is clear that at least two Egyptians were involved. Two EgyptAir airline security officers took the duct-tape/wire/cell phone laden cooking device I.E.D. out of his travel bag within minutes of the drop, likely turning it off so that only one guy takes the fall within 48 hours, based on his fingerprints and his own cellphone – the lone wolf.

They are later video-taped back at their Manhattan hotel, though they reportably make less than $500 a month salary. Hmm, who approved their monthly salary priced rooms in Manhattan rather than next to any of the hotels near JFK, LaGuardia or Newark airports?

EgyptAir’s onboard guards are trained by the special forces (e.g., Unit 777). Interestingly, President Sisi had pro-Trump comments shortly before this incident.

Not hearing much lately about the case. Like a blackout or something.