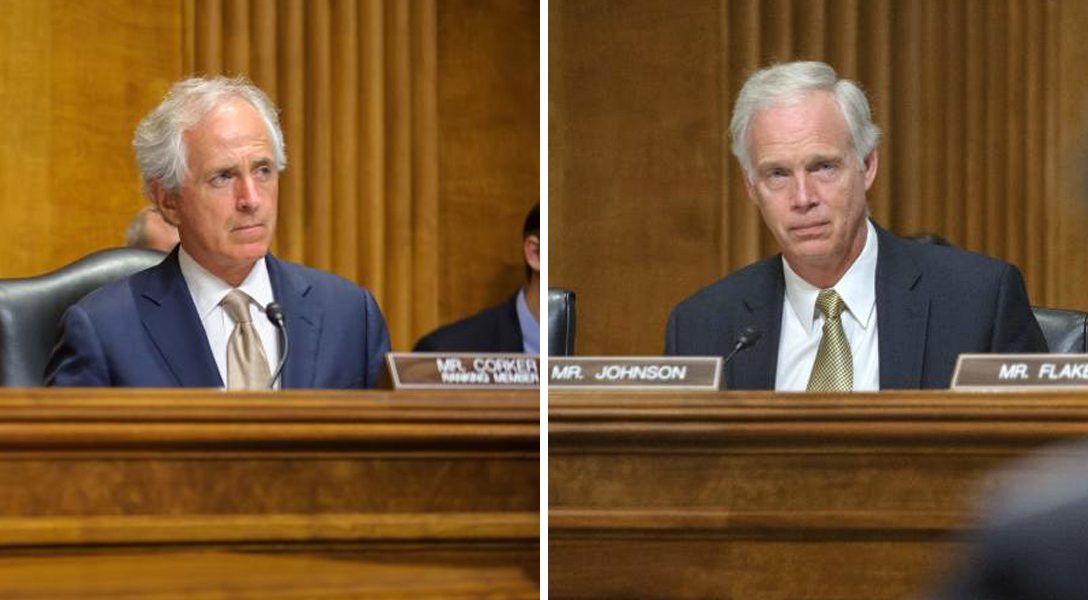 No Profiles in Courage as Senate Tax Bill Moves Forward

There were no profiles in courage in the Senate Budget Committee on November 28. Just one Republican Senator on the committee opposing the bill could have stopped the Senate’s controversial tax reform bill dead in its tracks during the procedural vote on Tuesday. None did.

At least two senators on the committee had previously raised concerns about the Senate proposal. No matter. They kept quiet and voted in lockstep with their colleagues.

Both Sens. Ron Johnson (R-WI) and Bob Corker (R-TN) had criticized the Senate proposal. Just hours earlier, Corker had told Fox News that he’d been a “deficit hawk” during his 11 years in the Senate, and wasn’t going to change. The lawmaker added he feared the Senate proposal as drafted would add too much debt.

“This committee just completed a discussion on $10 trillion worth of policy decisions in less time than it takes to wash a car,” charged Sen. Ron Wyden (D-OR).

But Corker raised no objections during the committee’s 15-minute “debate,” and then voted to move the massive bill to the Senate floor for a vote. Also mute was Johnson, who had complained prior to the vote that the proposal gave less tax relief to small businesses than it did large corporations. Both Senators reportedly decided to support the bill after being reassured by President Donald Trump and Senate leaders that their concerns would be addressed.

Twelve Republicans voted for the bill; all nine Democrats, as well as two independents, voted against.

“This committee just completed a discussion on $10 trillion worth of policy decisions in less time than it takes to wash a car,” charged Sen. Ron Wyden (D-OR).

Despite the silence of Republicans, and the speed of the vote, the meeting was far from routine.

When Senate Budget Chairman Mike Enzi (R-WY) began the roll call vote, he was shouted down by protesters who had filled the committee room. Many of them in wheelchairs, they chanted like a Greek chorus — with one protester starting, and then all the others repeating the message.

A man stood and shouted, “I am living with AIDS and cancer. If this bill is passed, people will die.”

Others echoed his words.

Enzi frowned, looking like a principal facing a crowd of unruly students. He showed irritation as he pronounced, “There is a disturbance in the hearing room. The committee will recess to allow the capitol police to restore order.”

The police first dragged out those in wheelchairs, as their colleagues — not yet removed — chanted, with fingers pointing, “Shame, shame, shame.”

Enzi’s face reddened in anger as he resumed.

“I will call the meeting back to order,” he said, explaining this was the “normal procedure” for this type of parliamentary move. The Senate Budget Committee was asked to combine the tax proposals of the Senate Finance Committee with those of the Senate Energy and Natural Resources Committee.The Senate Finance bill included all the tax changes and the repeal of the health insurance mandate in the Affordable Care Act, a change that will roil the health insurance markets and may make insurance coverage too expensive for 13 million Americans.

The proposal from the Senate energy panel would open up the environmentally sensitive Arctic National Wildlife Refuge to oil drilling.

There is no electronic voting in Senate committees, or on the Senate floor. Senators must speak their “Ayes” or “Nays.” As Senate Republicans began to cast their votes, protesters shouted again.

Sen. Chuck Grassley (R-IA) made himself heard above the din, a loud “Aye.” His Republican colleagues did not raise their voices to cast their votes. The Democrats boomed their “Nays.”

It was only after the vote that Enzi allowed Democrats to critique the bill. (Before the vote, Sen. Bernie Sanders (I-VT), the committee’s ranking member, had six minutes to speak.)

Wyden was the shouter. “We have seen this movie before,” he charged. Big tax cuts will lead to deficits and won’t lead to more jobs. Then Republicans, alarmed by the growing debt, will “come after the most vulnerable” and cut federal spending.

The bill’s opponents warned that the Senate and House proposals would greatly increase the deficit, would raise the taxes of tens of millions of middle-class households, and would encourage more companies to move their operations abroad.

They warned that Americans with pre-existing health problems would lose access to affordable health insurance if the ACA mandate is repealed.

They pointed out that corporations already were earning record-breaking profits, and they doubted that massive corporate tax cuts would result in bigger worker paychecks.

Each senator seemed to take a different approach to change minds. Wyden was the shouter. “We have seen this movie before,” he charged. Big tax cuts will lead to deficits and won’t lead to more jobs. Then Republicans, alarmed by the growing debt, will “come after the most vulnerable” and cut federal spending, he warned.

Sen. Jeff Merkley (D-OR) seemed to have memorized his talking points. He contended that “corruption” had driven the tax bill — that unlimited political spending by special interests had led to Republicans heeding the wishes of big donors over “we the people.”

“Every single Republican senator, except for the chairman, has left the room, like folks running away from the scene of a crime,” said Sen. Sheldon Whitehouse (D-RI).

Sen. Angus King (I-ME) lowered the temperature of the room by citing the Roman historian Tacitus who observed that “falsehood was confirmed by haste and uncertainty.” King asked that the Senate take the “utmost care” in deliberating on a bill that “may be the most important bill we ever vote on.”

“Postpone this bill,” he urged. A better tax proposal, that included the ideas of Democrats, “could get 70 or 80 votes” in the Senate. King also predicted that, if interest rates increase, it would not be long before the annual interest on the national debt would total $1.1 trillion, “the size of the entire federal discretionary budget. We’ll be in fiscal crisis …Let’s slow down,” he pleaded.

Sen. Tim Kaine (D-VA) took the folksy approach. Noting that he, Sanders, Enzi, and Corker had all been mayors, he recalled a vote by the Richmond City Council to limit the number of pets a household could own. The proposal before the council was noticed in the newspaper, was the subject of a council hearing, and then went to a vote. That process, Kaine observed, was “more deliberative, more inclusive, more fair, and more transparent” than the Senate’s process for the massive tax bill.

“I hate to see hearings disrupted by citizens … I cringe,” Kaine added. “But what choice do people have when the door is shut in their face?”

Of course, Kaine could empathize.

By the time the Democratic committee members spoke, their Republican colleagues had disappeared. Only Enzi remained.

Sen. Sheldon Whitehouse (D-RI), addressed Enzi with controlled but apparent anger: “The coverage won’t show this, but let me say this for the record: Every single Republican senator, except for the chairman, has left the room, like folks running away from the scene of a crime.”