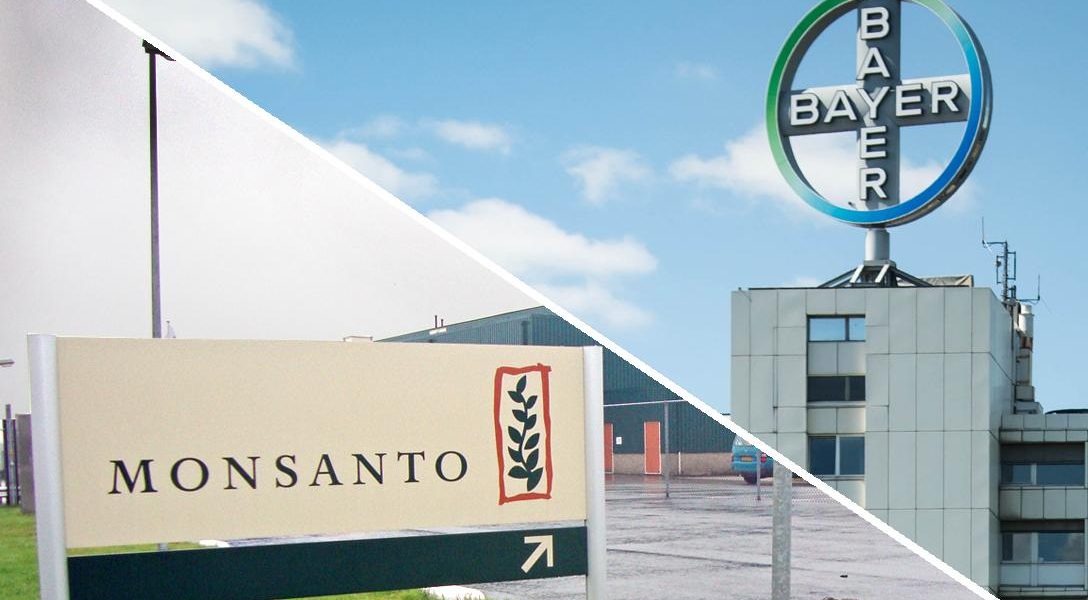 After Monsanto Binge, Bayer Could Dictate What We Eat

The biggest corporate takeover of 2016, if it happens, will create a company with a virtual lock on the world’s food supply.

Germany’s pesticide and pharmaceutical giant Bayer has offered $62 billion to buy Monsanto, the world’s largest producer of genetically modified seeds. The first bid was rejected but Bayer has the money to go much higher.

The merger would give new meaning to the words “market dominance.” Eighty-five percent of all corn and 93 percent of soy planted in the US contains Monsanto’s patented, genetically modified (GM) traits and is engineered to tolerate Monsanto’s weed killer Roundup (glyphosate). But US farmers also coat almost 90 percent of US corn seeds — and, increasingly, other major crops like soy — with a different pesticide that is produced by Bayer.

“This deal would be fatal. Bayer could decide, almost single-handedly, what grows on our fields and ends up on our plates.”

Bizarrely, Europe could soon be home to the biggest player in GM crops even though it is mostly opposed to genetic technology applied to agriculture.

Could it also end European rejection of genetically engineered seeds? “If a big German enterprise like Bayer is so big in GMO, there will be more pressure to put GMO on the EU market,” explains Jan Pehrke, of the German NGO Coalition Against Bayer-Dangers, which is organizing protests against the merger.

It might also give Bayer new leverage in the fight to overturn a series of European Union bans on neonicotinoid pesticides (“neonics”). Scientists have linked them to the large-scale deaths of honeybees and other pollinators. In the United States, Maryland has become the first state to ban consumer use of neonics.

Dominant in both seeds and pesticides, the new mega-corporation would have even more power than Monsanto. It could dictate “what farmers plant, how they grow it” and “what consumers can have on their table,” Marco Contiero, Greenpeace’s EU agriculture policy director, told AFP. It would possess massive lobbying muscle on both sides of the Atlantic with unprecedented resources to squeeze competitors, spin science, buy credibility, and bully regulators.

In just the past few months, the six big corporations that dominate the global seed and pesticide markets have tried to merge or swallow each other up. DuPont and Dow Chemical agreed to become one, and ChemChina is buying the Swiss GM seed supplier Syngenta.

However, in an unexpected blow to a potential Bayer-Monsanto merger, the European Union has refused to support even a temporary extension of the EU license for glyphosate, the chemical used in Monsanto’s flagship product, Roundup.

Glyphosate is the most commonly used herbicide in the world. German farmers currently use it on almost 40 percent of cultivated land. The World Health Organization’s (WHO) International Agency for Research on Cancer has classified glyphosate as “probably carcinogenic” to humans.

Extraordinarily, a EU Commission vote set for 23 June could actually be a last chance for glyphosate in the EU. The license expires on June 30. Under the rules, a majority of EU member countries (representing at least 65 percent of the population) have to vote yes to renew.

So far, many of the EU’s most populous countries have abstained. The Commission has the power to impose a renewal without public support but is unlikely to do so, least of all on the day the British are voting for or against “Brexit” — to leave or remain in the European Union.

Germany did not support renewing the license but German politicians might have acted differently “if it were a case of our ‘glyphosate,’” says Pehrke.

The EU vote shows how time is of the essence for the success or failure of the merger. There are strong doubts about the deal even in business circles. Irina Kummert, President of Germany’s Industry Ethics Association, wrote in Manager Magazin:

“Morality comes into play where there is uncontrollable market power or even a threat to life and limb…Morality in the past was not a criterion that mattered. But the current debate about a possible takeover of Monsanto by Bayer shows how that is changing: morality could become a deal breaker,”

Monsanto, One of the World’s Most Hated Companies

Bayer is headquartered in the country where Monsanto — one of the world’s most hated companies — is arguably hated the most. The prospect of a Bayer-Monsanto merger has divided the country’s ruling coalition under Chancellor Angela Merkel, the “world’s most powerful woman.” Her coalition partner, the Social Democrat or SPD party, has come out against the deal, which would be the largest in German history.

Campact, Germany’s largest activist group, made opposition to Monsanto’s GMO seeds a cornerstone of a spectacularly successful campaign against TTIP (Transatlantic Trade and Investment Partnership), the proposed free trade agreement between the US and Europe — 70 percent of Germans are now opposed. One of the slogans was: “No gifts for Monsanto.”  (Please see WhoWhatWhy’s recent article on the TTIP.)

Campact’s anti-merger website targets Bayer’s stockholders as well as public opinion, reminding the former that “the bad reputation of Monsanto in a merger could rub off on Bayer.” Campact warns the stockholders to “think twice” about the mega deal. “After all, their money is at stake.”

The Bayer-Monsanto deal will test the power of the Greens, an opposition political party in Germany. Green politicians are influential in both the German and European Parliaments. Germany’s Green representative in EU Parliament Sven Giegold has started a petition calling on the EU to block the Bayer-Monsanto merger. It says:

“This deal would be fatal. Bayer could decide, almost single-handedly, what grows on our fields and ends up on our plates.”

Bayer chief executive Werner Baumann has made the claim, to German daily Frankfurter Allgemeine Zeitung, that his company “enjoys an excellent reputation and appeal worldwide. We must take advantage of that.”

Baumann has recruited a brace of corporate public-relations firms to help sell the deal. According to Bayer’s PR, the new behemoth would be a global “sustainable agriculture company” that “relieves hunger” and “helps protect butterflies and bees.”

What will become of the name “Monsanto”?

Environmentalists and scientists preparing a symbolic Monsanto Tribunal for October have raised the issue in an open letter addressed to Baumann.

“Is there a danger that Monsanto is trying to evade the range of allegations and lawsuits brought against it?” they ask. “Might the company have a great interest in changing its name?”

Bayer’s ambition to morph into the world’s largest seed maker and pesticide company seems to rest in part on the assumption it can make the name “Monsanto” disappear — and sell its products under a new name.

If successful, it would be the biggest coup in the history of corporate greenwashing.