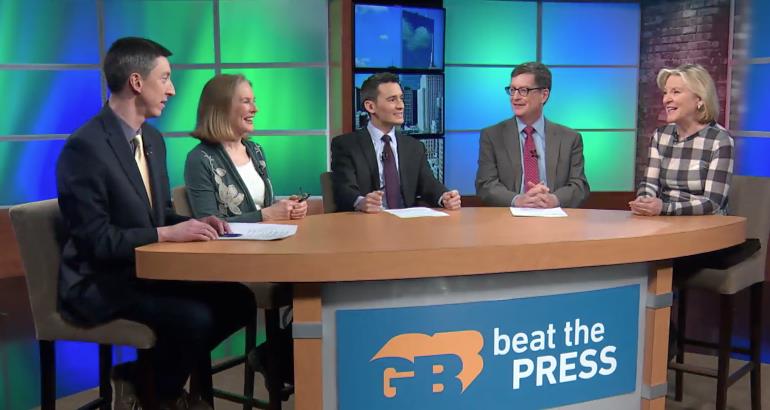 WGBH panelists, decrying the need for “alleged” when it comes to Dzhokhar Tsarnaev. Credit: WGBH

If there were any doubt that Boston’s media had a bias in the case, several of the city’s media pundits and one of its journalism professors have decisively put that question to rest. The panelists on WGBH’s “Beat the Press” were shameless in discarding any pretense of unbiased, neutral reporting.

The use of the word, “alleged” to identify a suspect who has not been convicted is a long-established practice of media ethics. It’s a standard which acknowledges that only properly-held trials can assign guilt. Yet using “alleged” or “accused” for Dzhokhar Tsarnaev is unnecessary, according to the pundits on “Beat the Press.”

“In the case of Dzhokhar Tsarnaev, I wouldn’t have a big problem if somebody simply described him as ‘The Boston Bomber’ because, the evidence is overwhelming to the point (that) there is virtually no other side to this,” said Northeastern journalism Professor Dan Kennedy.

The Boston Globe’s Dante Ramos went one step further, arguing that the use of “alleged” or “allegedly” is just lip service in this case. The words are “the tribute that we pay to the idea of innocent until proven guilty. There’s no way of putting these facts together in a way that he’s not one of the perpetrators.”

But, given the high number of sealed motions, the dubious hospital bed confession, the restrictions placed on the defendant and his attorneys that have left him incommunicado, is Tsarnaev’s guilt a foregone conclusion?

The fact is that the public and the press don’t know the whole story–and still may not even after the trial. Tsarnaev’s attorneys have made a strong argument to move the trial from Boston. All along, they’ve argued that seating an impartial jury will be impossible in the city, primarily because many prospective jurors have been bombarded by press coverage that accepts the official narrative that Tsarnaev is guilty. A campaign of law enforcement leaks has only made it worse.

Yet, those leaks are only half the problem if the media willingly abdicates its responsibility to be fair-minded and impartial. The abdication of some of Boston’s press corps, it seems, has been total.