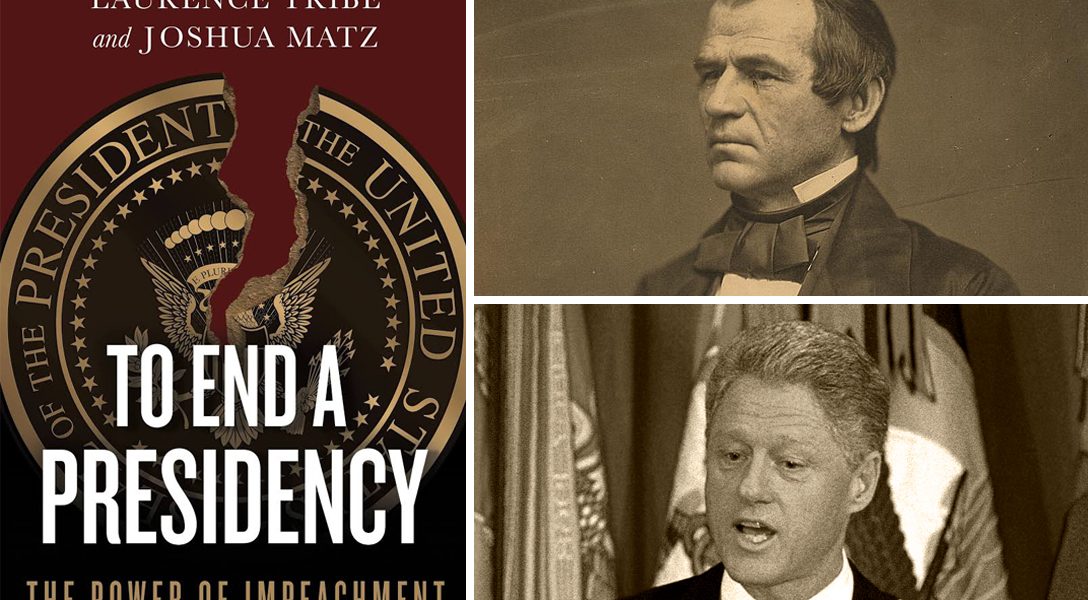 “David’s Bookshelf” is a new feature for WhoWhatWhy readers. David Wineberg, popular for his insightful and entertaining reviews online, will present new works of nonfiction and offer his thoughts and commentary on these books, whose topics we believe will be of interest to many of our readers.

The views expressed in these reviews reflect those of the author and not necessarily those of WhoWhatWhy.

Impeaching the president has been a hobby of Americans right from the beginning. George Washington faced the threat of impeachment for having John Jay negotiate a treaty with Britain instead of with France. Barack Obama was threatened with impeachment for pretty much everything he was or did. And when it wasn’t a president, it was a Supreme Court justice. Earl Warren and William O. Douglas were both the targets of Richard Nixon’s attempts at forcible removal.

Americans toss impeachment around like it was a common and ordinary process. No big deal. Laurence Tribe and Joshua Matz are here to tell you it is not. To End A Presidency is a sobering dive into the reality of the process, as dictated by the framers and as executed by lawmakers. It is thorough, intriguing, often entertaining, and unfortunately necessary.

The book traces the thinking of the framers, the vagueness of the mandate — Bribery, Treason, or High Crimes and Misdemeanors — and how it has been applied (or not) over the centuries. It appears to be a clever and well-structured tool to keep presidents from taking over totally. It has never been successfully implemented all the way. Richard Nixon resigned before the vote was called. Andrew Johnson avoided the axe by one vote. But Donald Trump has the lawyers all agitated and wondering if this might be the real thing. Spoiler alert: the authors’ conclusion is — probably not.

Impeachment is the most serious act Congress can take — overthrowing the choice of the voters. But talk of impeachment has become so banal that, in this century, both the Republicans under Bush and the Democrats under Obama have used it as a fundraising tool — to get or keep control of the House and thereby preempt impeachment. And of course in 2016, both candidates declared the other impeachable if elected — for “crimes” committed before they were elected. Impeachment has become trivialized and perverse.

There are details no one talks about, because few know:

– The reason the Senate must vote on conviction is that the framers thought the Supreme Court was too small a forum. They thought the Senate, being educated elites from across the nation, would be a fairer arbiter. The House wouldn’t be fair because it had already voted by at least two-thirds to proceed.

– Vice presidents can be impeached too. This is because they used to be not so much running mates as the defeated presidential candidate. They were clearly not the choice of the voters, had already been rejected once, and could wreak havoc on whatever the president had accomplished to that point.

– There is a fallback position for Congress — a resolution of censure whereby the president is not actually removed from office, but humiliated instead. That does not require a two-thirds vote by both chambers, as impeachment does.

– The Senate gets to vote twice — first on the impeachment articles themselves, and if any one of them passes, then whether the president is also forever banned from all public office.

– The record for impeachment resolutions is held by Rep. Henry Gonzalez (D-TX), who tried to impeach Ronald Reagan twice (Grenada, Iran/Contra) and George H.W. Bush once (Kuwait) for a total of three within a decade.

– If the House votes to impeach the president and the Senate fails to convict/carry out the impeachment, the president becomes essentially untouchable. He can be as arrogant and obnoxious as he wants, and as abusive and vulgar as he desires, knowing they won’t try that stunt again.

– And that could lead to others in government thinking — if it’s okay for him, why not for me and us too?

– But then, declining to impeach sends the same message.

Tribe and Matz also dissect the 25th Amendment, which enables a two-thirds vote of both chambers to remove the president and replace him with the vice president without impeachment. It is such a complex and fraught process, it is almost certain to fail. And it was never meant to replace impeachment. It was meant to keep the country going if a president became disabled and unable to continue.

This is, of course, all about Trump. He has nearly half the country believing he should be impeached. The list of reasons is endless, and the authors do their best to enumerate them. And he seems to add to them every day. Ironically, the risk is that if his loutish and outlandish behavior continues, Americans will get used to it and they won’t constitute impeachable offenses any more. In lowering American standards of governance, Trump is raising the barriers to impeachment.

The one point missing in Tribe and Matz’s analysis is the insurance policy carried by the president. The vice president would take over in the case of impeachment. Not as acting president, but as president. The thought of Mike Pence (known behind his back as Mike Dense when he was a congressman) running the country is by itself probably enough to prevent a Trump impeachment.

But then, that’s what Nixon thought when Spiro Agnew was his vice president, and again when Gerald Ford became next in line after Agnew was forced out for blatant corruption. It didn’t quite work out as planned. It never does.

To End A Presidency, Laurence Tribe and Joshua Matz, May 2018.