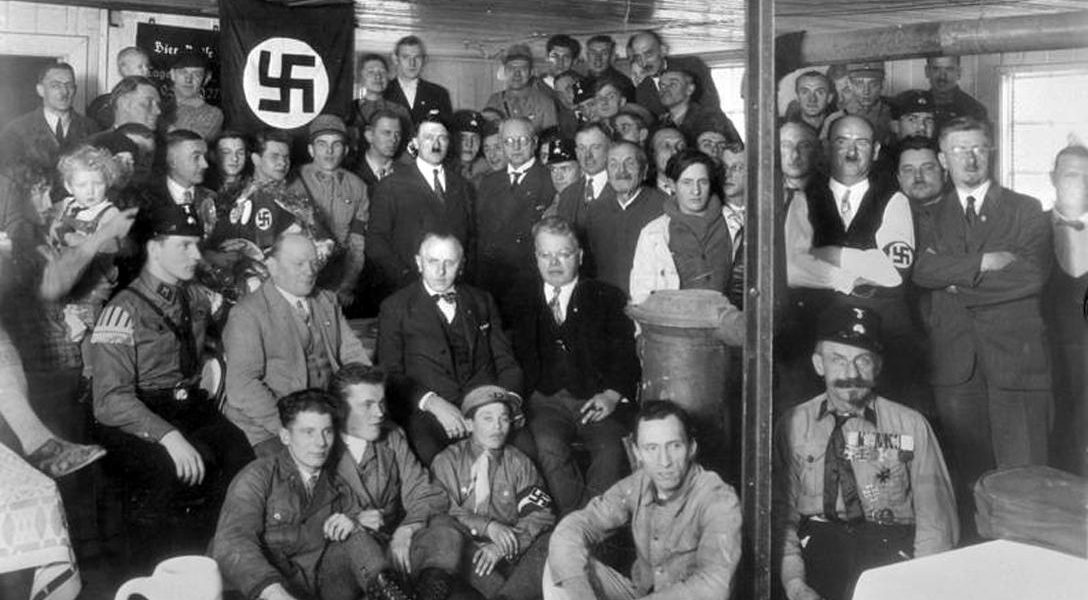 This is Part 1 of our excerpts from Peter Levenda’s astonishing book “The Hitler Legacy.”  Levenda, a serious researcher who travels the world over tracking down documentation, here presents chilling links between the Nazi era and terrorism today.

The Hitler Legacy: The Nazi Cult in Diaspora: How it was Organized, How it was Funded, and Why it Remains a Threat to Global Security in the Age of Terrorism.

Jörg Haider, leader of Austria’s right-wing movement and the top official in the Austrian state of Carinthia, died in 2008 when his government-issued luxury sedan crashed into a concrete pillar. Haider was verifiably intoxicated and the onboard computer of the wrecked vehicle showed he had travelled at nearly twice the permissible speed. Nevertheless, his followers have floated various theories that he might have been killed by his enemies in the  Deutsche Bank or the Mossad.

It stands to reason that Haider would have liked that — and also that the site of his accident has become a place of pilgrimage for Austrian right wingers.

What he undoubtedly would not have liked, however, are the revelations that have come to light since his death. Notebooks in his handwriting show that Haider received huge sums of money from Saddam Hussein and Muammar Gaddafi. The latter paid him $45 million while the Iraqi dictator funneled $5 million to the Austrian politician. What this money was supposed to buy is not yet known.

These shadowy financial ties stoked the interest of author Peter Levenda and led him to dig deeper into the relationships between European right wingers and Arab world dictators. And that is where we begin our very brief opening excerpt of his eye-opening book. More parts follow.

That same year I returned to the United States after an extended stay in Southeast Asia where I was researching the material that became Ratline. While I greeted the news of Haider’s death with mild interest, it was the revelation concerning his longtime relationship with Saddam and Gaddafi that attracted my attention. That was because the object of my research was an Austrian, too: an Austrian doctor who fled to Indonesia after the war, converted to Islam, and never set foot in Europe again.

In Indonesia, they say the old doctor was none other than Adolf Hitler.

While I understandably was far from convinced as to the accuracy of that claim, what the research proved to me was that there had been an extensive Nazi network in Southeast Asia before, during, and after the war. Further, that Nazi funds had made their way from Europe to Indonesia and might have been used to overthrow the government of left-leaning Sukarno in favor of the more right-wing, anti-Communist leader General Soeharto, as the involvement of former Reichs Finance Minister Hjalmar Schacht would imply.

Since then I have seen documentation that proves beyond any doubt that networks existed after the war to assist Nazi war criminals in their escape and survival, and that these networks were far more pervasive than even the fantasies of Frederick Forsyth and Ira Levin would have us believe. More to the point, the evidence that there existed (and still exists) a strong relationship between underground Nazi organizations and underground “Islamist” organizations is strong, incontrovertible, and deeply troubling.

In addition, documentation has become available—some of it recently declassified—to show that these networks were relegated not only to Latin American dictatorships and “banana republics” but to nations in the Middle East, Asia, and North America. The number of Nazis who “converted” to Islam after the war is astounding. The number of Americans who participated in the Nazi underground is even more astounding.

This is the Hitler Legacy. From terror bombings in Europe in the 1960s and 1970s, to assassinations of political leaders around the world, to drug-running and arms smuggling, to Operation Condor, and all the way to the events of September 11, 2001, what we have to confront is the possibility that our governments and our intelligence agencies have become Sorcerer’s Apprentices. Like the Disney movie, our Mickey Mouse savants and spies have clumsily summoned forces beyond their control. What began as an effort to contain the Soviet Union and the People’s Republic of China has become the template for a campaign of global terrorism directed at us.

This is that story.

(Editor’s Note: At WhoWhatWhy, we periodically excerpt works of interest. We may not independently verify all claims made or conclusions drawn. )