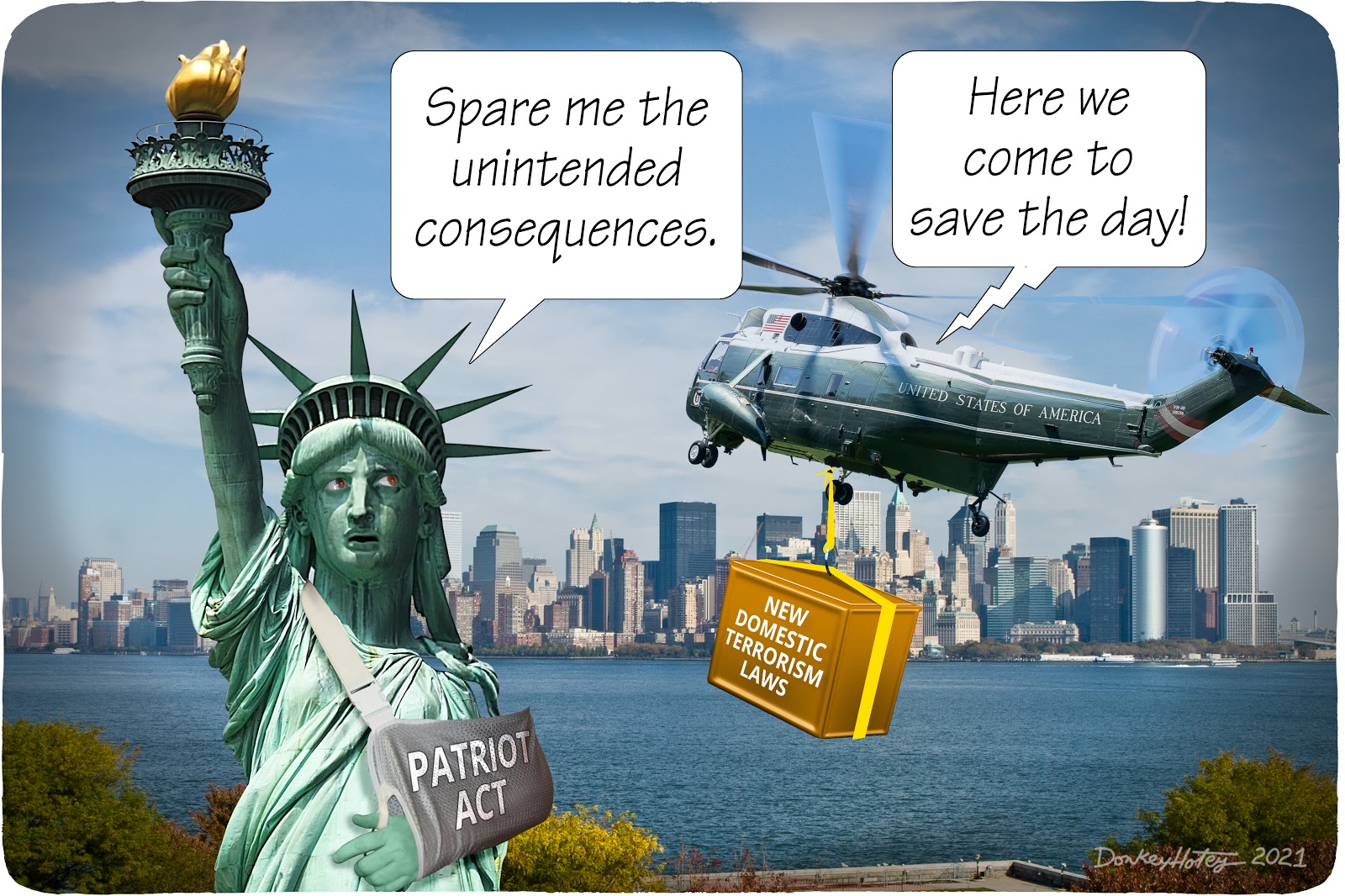 Some fans mourn the end of beloved fictional sagas. To keep the story going (or to improve it), they write their own continuing adventures. In related news, here comes some Patriot Act fan fiction.

The January 6 Capitol riot has revived the debate over whether there should be an actual statute for domestic terrorism. The lack of a big federal law leads to the mistaken impression that we don’t have sufficient tools to combat domestic terrorism, and so we are somehow unprepared for events like the riot. There’s a fear that law enforcement can’t adequately monitor these groups.

This conversation isn’t new. (The FBI Agents Association boldly tweeted in 2019 a recommendation to “urge Congress to make domestic terrorism a federal crime.” That same year, California Rep. Adam Schiff (D) tried to get a federal domestic terror bill pushed through, unsuccessfully.) But after the January 6 mix of aimless milling around and sudden, shocking violence, politicians got all razzed up again to pen some big new bills.

Hillary Clinton called for “new criminal laws at the state and federal levels that hold white supremacists accountable and tracking the activities of extremists such as those who breached the Capitol.” Rep. Brad Schneider (D-IL), Sen. Dick Durbin (D-IL), and other Democrats proposed the Domestic Terrorism Prevention Act of 2021, which is a redux of a popular bill from last year that passed the House but died in the Senate.

The effort to target organized white supremacist activity is clear and admirable, but opens the door for increased surveillance of American citizens while disregarding that there are already plenty of laws out there to handle this sort of thing. According to civil libertarians, the whole thing is unnecessary: right-wing terrorism isn’t flourishing because of a shortage of laws, but because of a lack of will to go after said groups. (And because of encouragement from a social media-savvy former president.)

So when lawmakers geek out over making new laws when it’s not at all clear new laws are needed — why, that seems a lot like they’ve entered the seamy world of political fan fiction. You have an original, “canonical” text — Harry Potter, say, or Star Wars, or the Patriot Act — and fans of the canon are so eager to engage, to be a part of the thing, that they write their own stories. New adventures in the case of fiction, more surveillance in the case of policy, a lot of surprising plot twists as the result of both. It’s wish fulfillment: why can’t Luke and Han fall in love? Why can’t we spy on our citizens better?

The uncomfortable truth about fan fiction is that a lot of it isn’t any good. The same can be said for laws that give the government undue powers of surveillance. Let’s make sure we don’t go adding hackneyed crap to the canon of American policy.

The cartoon above was created by DonkeyHotey for WhoWhatWhy from these images: NYC (William Warby / Flickr CC BY 2.0), Liberty (Divya Thakur / Flickr CC BY-SA 2.0), and Marine One (Trump White House Archived / Flickr).