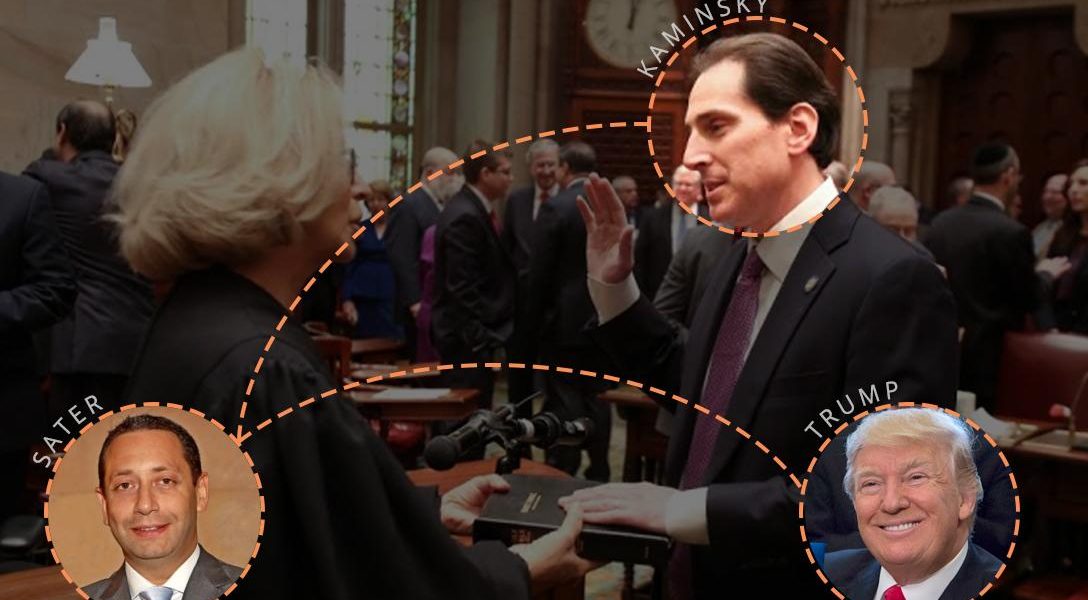 Government Must Tell if Trump Associate Had Russian Mob Ties

Several weeks ago, WhoWhatWhy published an investigative story on Donald Trump, the Federal Bureau of Investigation (FBI), and the Russian mob. It addressed challenges the FBI faces in fully investigating and reporting to the public what it knows about Trump’s past and his relationships.

One of the figures in that story — and in a followup piece — is a former Trump business associate named Felix Sater. Our article pointed out that Sater, a man with a criminal past, had become a “cooperating witness” for the FBI and had been so while he worked in Trump Tower. He had been highly valued by the FBI — as best as we could determine both for providing information about international terrorism and gangsters from countries of the former Soviet Union.

We were unable at the time to reach Sater for comment, but since publication, we have heard from him. He claimed that he had done no work for the FBI relating to “Russian organized crime,” and that, moreover, he had never even heard of the legendary godfather of the Russia-based crime network, Semion Mogilevich. We have appended his remarks to our original article in an Editor’s Note.

We also added an interesting revelation from the Wall Street Journal that Sater, who says he knows none of those gangsters, has, separately, in a legal action against the man who was his business partner in a deal with Donald Trump, referred to the man as a “Kazakh gangster.”

Without splitting hairs about the differences in meaning between “former Soviet Union,” “Russian,” and “Eastern European” when referring to criminals with roots and ties in various parts of the former Eastern bloc, the question of whether organized crime was a factor in Sater’s usefulness to the FBI while he was a business associate of Donald Trump needs to be resolved.

Someone who could help solve this puzzle and clarify Sater’s connections to the Russian mob is Todd Kaminsky, a former federal prosecutor and now an elected official in New York State. But Kaminsky seems reluctant to press for disclosure.

This is what we do know:

In a secret proceeding in 2011, federal prosecutor Kaminsky praised Sater for providing valuable information on “Russian organized crime.” This information had been hidden in the previously sealed transcript of an argument before the US Court of Appeals for the Second Circuit, which is based in Manhattan. It was first published on the law blog of Dan Wise, one of the co-authors of this article. (Sater did not respond to two email requests seeking comment on Kaminsky’s statement about him, beyond seeking to know in which venue Kaminsky made that statement.)

Clearly, getting to the bottom of the close relationship between the FBI and Sater is essential if the public is to trust the FBI to fully investigate Trump’s relationships to a wide network of Russian-orbit-connected figures, including Vladimir Putin, various billionaire oligarchs, and a crime network widely believed to be closely enmeshed with the Russian leadership.

Aside from speaking with Sater, the House and Senate Intelligence Committees should also speak with the federal prosecutors and FBI agents who worked with Sater, praised his cooperation as an informant, and sought leniency at his sentencing hearing after he was convicted on a charge of securities fraud.

Beyond whatever action Congress takes as a result of its investigations, there are court files that could shed light on the Trump-Russia connection. But getting them unsealed has not been easy. Nor has it been easy to get anyone to talk about Sater’s work. This includes Kaminsky, a former federal prosecutor in the Eastern District of New York, which encompasses Brooklyn and Long Island, and one of the prosecutors present at Sater’s sentencing. He is now a New York state senator representing Long Island (9th District, South Shore).

Kaminsky’s office ignored repeated requests for comment on whether he believes the remaining material in Sater’s court files should now be unsealed — considering the paramount national interest in uncovering any connections between the Trump campaign and Russian mobsters, oligarchs, and political leaders, including Putin.

Many news organizations, including WhoWhatWhy, have reported that in today’s Russia, the criminal class, the monied elite, and the political leadership are closely intertwined. Kaminsky, through a spokesperson, declined to comment.

The reason Kaminsky’s now-public 2011 statement is so important is that it makes clear Sater had enough credibility with the Russian mob that he could gather “valuable” information from Russian-language gangsters operating in New York City.

This connection was reinforced in February when Sater emerged as the linchpin of an extremely pro-Russian proposal to halt the fighting in Ukraine. Sater, working with a rogue Ukrainian legislator, Andril V. Artemenko, and Trump’s personal lawyer, Michael D. Cohen, would have laid the groundwork for ending US financial sanctions against Russia. Further, it would have given Russia unquestioned control of Crimea, which it annexed in 2014, for another 50 to 100 years.

The proposal landed on the desk of Trump’s then-national security advisor, Michael Flynn, who has since been forced to resign, ostensibly for misleading Vice President Mike Pence about conversations with the Russian ambassador to the US before Trump’s inauguration. The Sater-Artemenko-Cohen proposal has not been acted upon.

Sater’s role emerged against a steady escalation of concern that Russia had been behind the hacking of both the Democratic National Committee and John Podesta, the chairman of Hillary Clinton’s presidential campaign. Indeed, just three days before the WiseLawNY story ran, on March 23, FBI Director James Comey told the House Intelligence Committee that his agency had begun a counterintelligence investigation into the Trump campaign’s ties to Russia in July 2016.

It seems beyond question that Kaminsky and other Eastern District prosecutors and law enforcement agents with whom Sater “cooperated” during his years as an informant have a great deal of information about his work with the Russian mob. (The Eastern District includes Brooklyn, long the center of Russian-speaking immigrants in New York.)

Sater, who pled guilty to one count of racketeering in 1998 in connection with an organized-crime “pump-and-dump” stock fraud, was not sentenced until 2009, and he served the FBI as a “cooperating witness” during the intervening eleven years. It was during this period that Sater worked at Bayrock, the real estate development company with offices in Trump Tower that partnered with the Trump Organization on numerous projects, including the Trump SoHo. In pending litigation, Bayrock is alleged to have served as a large-scale criminal operation, laundering vast sums from the former Soviet Union.

Thanks to his efforts as an informant, Sater was given a slap on the wrist for defrauding investors: no jail time, no probation, no restitution, and just a $25,000 fine. It was Kaminsky who represented the government at Sater’s sentencing hearing. Prosecutors had determined that the pump-and-dump operation in which Sater took part in the mid-1990s had fleeced its victims of at least $40 million.

All the information that Justice Department lawyers and FBI agents gathered while supervising Sater’s work as an informant in the 11-year span between his guilty plea in 1998 and sentencing in 2009 may be available (or generally known) to certain agents conducting the counterintelligence probe.

As WhoWhatWhy exclusively reported, one of Sater’s FBI handlers, Gary Uher, was part of Trump’s security team during the campaign. The same story reported that two former Eastern District prosecutors represented Sater at his sentencing hearing in 2009 as attorneys with the law firm Morgan, Lewis & Bockius. One was Leslie R. Caldwell, who had been a senior trial counsel in the Eastern District’s Business and Securities Fraud Section; the other was Kelly Anne Moore, who had headed the office’s Violent Crimes and Terrorism Section. President Barack Obama tapped Caldwell to become the number three official in the Department of Justice in 2013. Loretta Lynch worked with both Caldwell and Moore when she was a prosecutor in the Eastern District; in fact, she signed Sater’s cooperation agreement in 1998.

The vehemence with which prosecutors and judges have acted to block the public airing of information from Sater’s file suggests that prosecutors may have cut a deal with Sater so they could catch even bigger fish: the Russian-based mob and its “boss of bosses,” Semion Mogilevich, whom the FBI would later declare a serious national security threat. (As noted above, Sater has denied even having heard of Mogilevich.)

The court battle over whether Sater’s criminal file in his original case should remain sealed continues, six years after the Second Circuit barred two lawyers from talking to anyone, including Congress and arguably even investigators, about the contents of that file. The lawyers were Frederick Oberlander, who had disseminated sealed information from Sater’s file, and Richard E. Lerner, who had defended Oberlander. (Oberlander had initiated the litigation against Bayrock that sought to unseal Sater’s file.)

Indeed, the veil of secrecy had grown so thick by 2011 that in response to a petition from the Associated Press, a judge appointed by the Second Circuit to enforce its orders refused to allow Oberlander and Lerner to even discuss the contents of the materials the judge himself had just ordered unsealed.

Since then, parts of Sater’s criminal file have become public — although the government remains extraordinarily tight-lipped. The reason for the continuing secrecy can probably be found in the 2015 confirmation hearings of Loretta Lynch, who succeeded Eric Holder as US Attorney General under Obama. In a letter responding to a written question from Utah Senator Orrin Hatch, a senior Republican member of the Senate Judiciary Committee, she made it clear that there was much sensitive information in Sater’s criminal file. “The majority of the materials that remain sealed go to the heart of Sater’s cooperation in several highly sensitive matters,” Lynch wrote to Hatch. The public has no idea of what the remaining sealed files contain, other than Lynch’s tantalizing remark.

The nation and world are now riveted by investigations into the Trump campaign’s putative role in Russian attempts to influence the outcome of the 2016 election. The issues raised go to the heart of the integrity of the electoral process.

The traditional rationale for cloaking information about an informant’s identity or the scope of his disclosures is to protect the informant’s safety. But Sater’s own behavior suggests that he does not fear for his own safety as a consequence of cooperating with law enforcement officials.

In this vein, it is worth noting that Sater undertook the Ukrainian “peace proposal” mission, which carried with it a reasonable possibility of generating headlines — as it did. Further, if the government feared the exposure of Sater’s mission, it is hard to imagine that his handlers would not have reined him in. The involvement of Cohen, Trump’s personal counsel, is even more inexplicable.

Perhaps Kaminsky, recognizing that the voting public has a deep interest in these matters, will reconsider whether the government’s interest in protecting Sater, the informant, takes priority over determining whether the Trump campaign was complicit in any Russian effort to undermine the 2016 election. Of course, Kaminsky himself may be bound by an obligation not to disclose classified information.

Nonetheless, in 2018, Kaminsky will be running for a second term as state senator representing a swing district in the southwestern corner of Long Island. If he doesn’t budge on the question, it could become an issue on the campaign trail.

The people of the United States — and the world — must have confidence in the conclusions of the ongoing investigations into the Trump-Russian connection. Given the importance of these investigations, continued court secrecy may no longer be in the national interest.