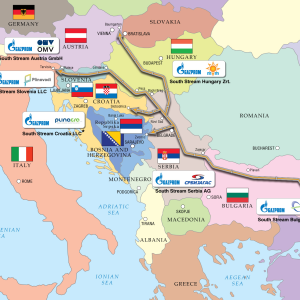 Does the Ukrainian Crisis Revolve Around This Pipeline? South Stream pipeline’s planned route through the heart of Europe

Now that all eyes are on Ukraine and the potential of a bigger war looms, there’s never been a more important time to understand what is at stake.

As WhoWhatWhy readers know, the real reasons surrounding a conflict are often buried under the headlines and rhetoric. So it shouldn’t come as any surprise that, behind the scenes, oil and natural gas are driving a big piece of the U.S. response to Russian involvement in Ukraine.

If you want to understand where the rubber meets the geopolitical road in the Ukraine war, you need to learn about the 1,480-mile South Stream natural gas pipeline.

The pipeline is core to the larger battle being fought over Europe between Moscow and Washington. It may even have been a motivation behind Russia’s annexation of Crimea.

Why does South Stream matter? It’s a $21.6 billion project to connect Russia’s gas reserves—the world’s largest—to Europe’s markets.  Europe relies on Russia for about 30 percent of its natural gas.

Any delays in finishing the pipeline—scheduled for completion in 2018—can only help Russia’s competitors in the international energy business.  And one player gearing up to challenge Russia in the European energy market is the United States.

This year, the United States became the largest producer of natural gas and oil hydrocarbons in the world, surpassing Russia and Saudi Arabia. There’s solid evidence that the U.S. is seeking both commercial advantage and political influence by gaining a foothold in Europe’s oil and gas markets.

The evidence comes, in part, from the targets the Obama administration has chosen to punish for Russia’s annexation of the Crimean peninsula. All of this raises the question of how much the confrontation in the Ukraine is about who gets to sell natural gas (and later oil) to one of the world’s biggest energy consumers: Europe.

South Stream owes much of its existence to the 2005-2010 Russia-Ukraine gas disputes, which left as many as 18 European countries cut off from Russian gas. Gazprom, Russia’s state-run energy company, proposed South Stream as a way to circumvent Ukraine and ensure an uninterrupted, diversified flow to Europe. It found a willing partner in the Italy’s state-controlled oil and gas company, Eni S.p.A., and seven other gas-hungry countries.

To truly understand how intrinsic South Stream is to Russian economic influence over Europe, one only has to look at some of the targets of U.S. sanctions against Russian or Russian-linked companies. Two of them were directly aimed at slowing down or stopping South Stream.

The first South Stream-related company the U.S. targeted was Stroytransgaz, which is building the Bulgarian section. Putin ally and billionaire Gennady Timchenko owns it and he’s already on the sanctions list. So Stroytransgaz had to stop construction or risk exposing other companies on the project to the sanctions.

The second entity in the sanctions crosshairs was a Crimean company called Chernomorneftgaz. After the Russian annexation, the Crimean parliament voted to take over the company, which belonged to the Ukrainian government. And guess what that company owned? The rights to the exclusive maritime economic zone in the Black Sea.

That’s important because Russia routed the pipeline on a longer path through the Black Sea that cut out Ukraine. It avoided the Crimean waters, going instead via Turkey’s.

The European Union attacked South Stream through a non-binding resolution that called for a halt to its construction. EU member states don’t have to pay attention to the resolution, which was mostly designed to put public pressure on Russia.

That’s where split among countries in Europe became evident.

Several that will benefit from the pipeline have spoken out in support of construction or moved ahead with agreements to build it. Italy wants it to proceed, and Austria and Russia signed an agreement to construct a segment, in defiance of the EU’s position that the pipeline may violate anti-competitiveness rules. Germany’s Siemens will supply the instrumentation for the pipeline. One country that’s trying to avoid getting trampled as the giants fight is Bulgaria. It still has close ties to Russia but is subject to pressure from the U.S.

Both have taken aim at its section of South Stream, which is where the pipeline will come ashore from Russia via the Black Sea. The European Union warned the Bulgarian government that its construction tender broke EU rules. The U.S. sanctioned the company that won the tender, Stroytransgaz.

Bulgaria is arguing to the EU that its position is legally sound, and that its economic stability is at risk without South Stream. Bulgaria has no other secure gas supply so “the national interest must be protected,” Economy and Energy Minister Dragomir Stoynev said.

In the meantime, Bulgaria is hard at work finding a way around the U.S. sanctions. The government may hand the construction job to a subsidiary of Gazprom that’s building the Serbian section. And here’s a neat trick: the Bulgarian government approved an $835 million loan from Gazprom to pay for it, secured by future revenue from the pipeline.

According to Vladimir Putin, South Stream is just a business venture facing ordinary commercial setbacks that have nothing to do with Ukraine. Washington is interfering, Putin said after meeting with his Austrian counterpart in June, because the United States wants to supply the gas to Europe. “It is an ordinary competitive struggle. In the course of this competition, political tools are being used,” he said, referring to the U.S. sanctions.

Undoubtedly, the United States has a massive commercial interest in selling natural gas to Europe. Thanks to the abundant supply created by the domestic shale-gas boom, the U.S. may be able to export liquefied natural gas to European buyers in the near future. Already, Washington has licensed seven export facilities; about 30 more are awaiting approval. The first exports could start by the end of this year. But since all the infrastructure to ship liquefied gas is not yet in place, Serbian Prime Minister Alexander Vucic, a South Stream proponent, has ridiculed the idea of U.S. gas exports to Europe in a year or two as “fairy tales.” Meanwhile, Putin has pointedly said that piped gas will always be cheaper than the liquid form, and Moscow has consistently claimed that Europe’s gas bill will rise if it chooses alternatives besides Russian natural gas.

However, there’s more than natural gas at play in Europe’s energy future. The Obama Administration is negotiating a free trade agreement with Europe that could legalize American oil exports for the first time since 1975. This would bring U.S. exporters in direct competition with Russia, which sells 84 percent of its oil exports to Europe today.

At the moment the South Stream pipeline is projected to generate approximately $20 billion a year in income.  With that much money at stake, the politics behind the armed confrontation in eastern Ukraine takes on a new dimension: Is the shooting war there part of larger, longer-term conflict—a continuing battle between the United States and Russia for global energy dominance?

THUMBNAIL
[box] WhoWhatWhy plans to continue doing this kind of groundbreaking original reporting. You can count on us. Can we count on you? What we do is only possible with your support.