UPDATE, October 22, 2021: The full release of the JFK assassination files has been postponed once again, this time until December 15, 2022. Announcing his decision, President Biden cited COVID-19-related delays in reviewing redacted documents.

The national archivist had told the president “making these decisions is a matter that requires a professional, scholarly, and orderly process; not decisions or releases made in haste” — even though the “final” review of redactions has been going on since 2018.

While advocating transparency and ordering an intensive review over the next year, Biden did give the archivist a potential out from complying with the 2022 deadline: if the redaction is deemed “necessary to protect against an identifiable harm to the military defense, intelligence operations, law enforcement, or the conduct of foreign relations.”

There was one potentially significant step forward, however. Biden directed that the entire collection of records related to the JFK assassination be digitized for ease of public access. Currently, researchers need to travel to the national archives in Maryland.

October 2, 2021: President Biden faces many well-publicized deadlines. But there’s one that has flown under most everyone’s radar. Biden has less than a month to make a decision about still-withheld records on one of the most consequential murders of the 20th century.

Nearly 30 years ago, Congress unanimously passed the President John F. Kennedy Assassination Records Collection Act, a landmark moment in the fight against government secrecy. In the ensuing years, many documents were handed over to the National Archives, surprising and thrilling skeptics of big government.

But the euphoria soon died down. Some of the more sensitive documents were either produced with countless redactions or withheld completely, and in the years following the 1998 disbandment of the Assassination Records Review Board (ARRB) — the entity tasked by Congress to facilitate the collection of the actual records — the flow of assassination material slowed to a trickle.

With Congressional oversight lacking, there was little incentive for any of these agencies, the CIA and FBI in particular, to finish their legally required review, and several thousand files were still classified to some degree as a 2017 deadline approached.

While many of these files were handed over to the National Archives, some of them quite interesting, thousands still contained redactions, or were held back in full. And then they were delayed even further, until a new deadline was set: October 26, 2021.

According to the National Archives website, nearly 16,000 documents remain partially redacted, most created by the CIA and FBI. With nearly six decades having passed since Kennedy was gunned down in Dallas, this continued secrecy runs contrary to the expressed intent of the JFK Records Act.

JFK’s murder and the Warren Commission’s tawdry investigation of it are frequently cited as the origin of the downward spiral of Americans’ trust in their institutions, along with the Pentagon Papers and Watergate.

If Biden wants to help restore the American people’s faith in government and its institutions in general, it’s hard to imagine a better opportunity than the one he has this October. He can start building a legacy for his administration as one that promotes governmental openness at a time when the very idea of objective truth faces an uncertain future.

In a recent letter to the White House, a number of lawyers pressured him to do the right thing. These attorneys, including noted Washington whistleblower representative Mark Zaid, point out that none other than Biden himself said in an early press release: “My administration has no greater task than restoring faith in American government.”

Below, we are republishing a succinct summary of the JFK Records Act (along with some annotations) and its “deadlines” that have come and gone because of stonewalling by federal agencies that are supposed to be subject to its enforcement. It was written by Mark E. Adamczyk, an attorney who for the past 20 years has been studying the JFK assassination and related history.

Adamczyk highlights the looming deadline for the release of the JFK records by the National Archives, outlines Biden’s responsibilities as defined by the JFK Assassination Records Collection Act and urges readers to join him in writing a letter to the president asking him to follow the requirements of the law. 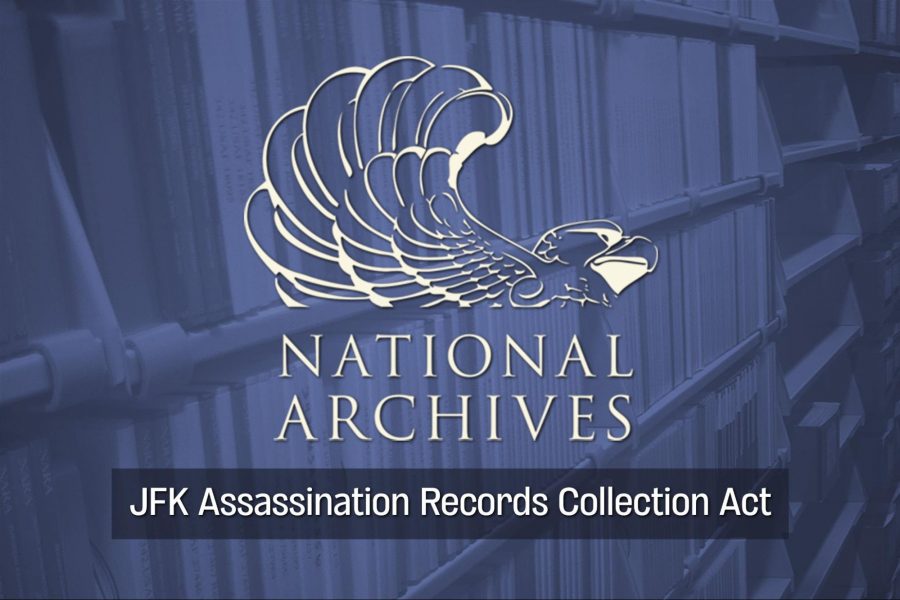 The following article by Mark Adamczyk originally appeared in late September on Kennedys and King, a website dedicated to political murders.

The JFK Assassination Records Collection Act of 1992 (the “JFK Act”) mandated the final release of all assassination records by October 26, 2017. In October of 2017, President Trump publicly committed to authorizing the release of all records.

However, on the eve of the October 26, 2017, deadline, Trump changed course and issued an executive memorandum authorizing an additional delay of six months.

[Brian Baccus: When Trump first postponed to April 2018, he relied on the advice of White House legal counsel Curtis Gannon, who gained some notoriety months earlier as the author of another dubious and controversial memo, the one that authorized the so-called “Travel Ban.”]

We can only assume that agencies protecting these records (namely the CIA and FBI) pressured Trump at the eleventh hour for more time.

[BB: Mike Pompeo, in his capacity as CIA director at the time, reportedly urged Trump to back down from his initial pronouncements about transparency, and a National Security Council official revealed to The Washington Post that a number of federal agencies were actively imploring Trump to withhold release of some of the files.]

We will never know exactly what happened. What we do know is that Trump’s executive memorandum was a violation of the JFK Act. At the very least, Trump was supposed to issue a document that certified the specific reasons for postponement as required by the JFK Act.

[BB: Any remaining requests for continued classification were supposed to be subject to presidential approval on a record-by-record basis. Andrew Iler, one of the attorneys most involved with the research done for the Biden letter and its attached legal memorandum, stated in an interview with WhoWhatWhy that despite the explicit language of the Act requiring presidential approval of each remaining record sought for continued classification, “It’s not clear that President Trump looked at even one record.”]

After the six month “extension,” agencies were supposed to provide their final reasons for postponement to the president and the archivist. Compliance with the JFK Act was to be finally accomplished by April 26, 2018. Inexplicably, President Trump then issued another executive memorandum granting agencies an additional three years to “complete” their review of assassination records.

This was on the heels of a 25-year mandatory review obligation imposed by the JFK Act and then an additional six-month period to complete that review.

This effort is not about proving a conspiracy or validating the previous findings of the Warren Commission or House Select Committee on Assassinations. It is about following the law, which was passed by Congress in 1992.

After receiving recommendations from the archivist, the president would then be in an informed position to authorize a final release by October 26, 2021. That was the plan, at least designed by President Trump in 2018 with legal advice from the Office of Legal Counsel.

[BB: Over the summer David Ferriero, official archivist of the United States since 2009, and some of his colleagues at the National Archives and Records Administration, have been meeting with officials from the various federal entities subject to the Records Act, with the goal of expediting their declassification process. Ferriero issued a recommendation on September 26 to the president regarding the remaining records, but it is not publicly available at this time. Biden will now have a month to consider the recommendation.]

The archivist is not to blame here. I sincerely believe that the archivist wants to see these records released. These records are based on an event that happened in 1963. The problem is that the archivist is a custodian of records and does not have the authority under the JFK Act to compel the release of assassination records. Only the Assassination Records Review Board (ARRB) had that power under the JFK Act, but unfortunately the ARRB only had authority and funding through 1998.

In order to do his job under the JFK Act, a federal statute, Biden needs legitimate and transparent reasons from agencies for continued postponement. If the president receives that information, he can then make an executive decision on continued postponement. If the president authorizes postponement of more records, it must be accompanied by a written and unclassified certification of the reason(s). That is what the JFK Act requires. Vague explanations based on “national security” do not come close to meeting the standards of the JFK Act.

I recently signed a letter and legal memorandum to Biden expressing the importance of this issue. That document can be viewed here. I strongly encourage you to contact the White House with a simple request. Follow the law. Stop the delays based on unfounded (and undisclosed) arguments from agencies that wish to continue hiding these records.

[BB: Accompanying the letter sent to Biden is a diverse and accomplished list of signatories voicing their support for the overdue enforcement of the Act. The list includes political scientists, prominent attorneys, professional historians, actor Alec Baldwin, several journalists, former Congressional investigators, and the man whose 1991 film JFK was the genesis for the legislation, Oliver Stone. The filmmaker and Vietnam veteran recently produced another film about the assassination, this time a documentary, JFK Revisited: Through the Looking Glass, which premiered at the Cannes Film Festival in July.

One of the more compelling and even surprising aspects of the push for governmental transparency on this issue is that it is not confined to any particular point of view regarding the circumstances of Kennedy’s death. In addition to the names of individuals like Stone, the list also includes some of the more ardent supporters of the Warren Commission’s conclusion that Lee Harvey Oswald acted alone: journalists Gerald Posner, Max Holland, and Dale K. Myers.

Another important signatory is G. Robert Blakey, former chief counsel for the House Select Committee on Assassinations, which officially concluded in 1979 that Kennedy was “probably assassinated as a result of conspiracy.” Blakey also played a significant role in drafting the JFK Records Collection Act.]

This effort is not about proving a conspiracy or validating the previous findings of the Warren Commission or House Select Committee on Assassinations. It is about following the law, which was passed by Congress in 1992. It is worth noting that Joe Biden was the chairman of the Senate Judiciary Committee when the JFK Act was passed by Congress in 1992.

The executive branch recently authorized the release of 9/11 records and it has the same chance to earn trust from the American public by authorizing the release of the JFK records. It should not be a difficult decision. It is what the law requires.