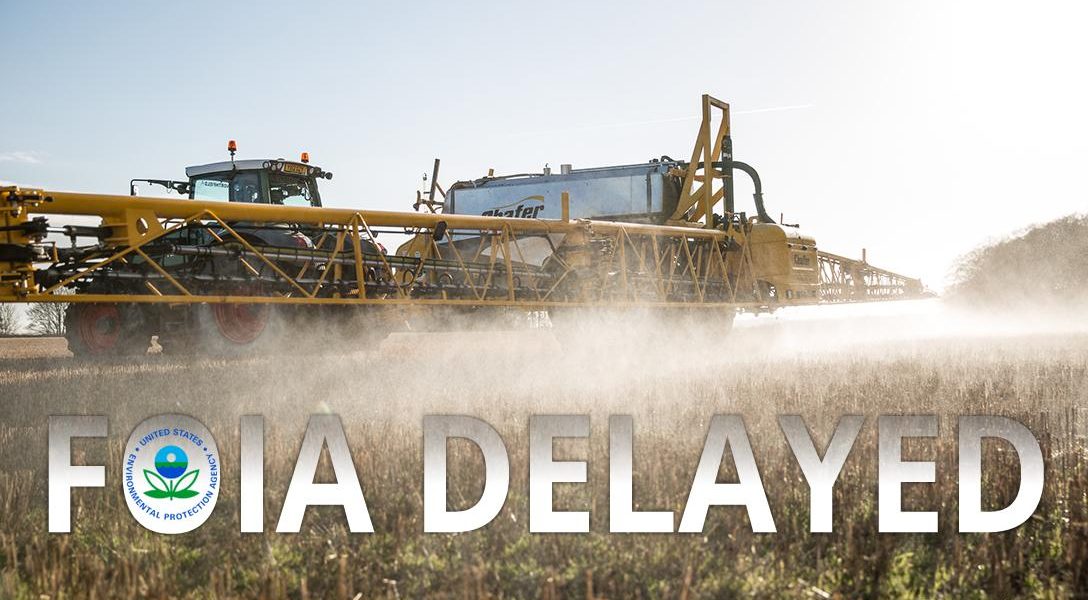 Why Is the EPA Delaying Release of Glyphosate Information?

Whether glyphosate, the active ingredient of a popular herbicide, causes cancer has been the subject of heated debate. About a year ago, the Environmental Protection Agency (EPA) briefly published information on its website indicating that glyphosate was not carcinogenic, but deleted it after less than a week.

That left enough time for Monsanto, which uses glyphosate in its popular weed-killing product Roundup, to tout the findings of the study on its website. It also prompted U.S. Right to Know, a food safety advocacy group, to use the Freedom of Information Act (FOIA) to find out how the EPA arrived at this conclusion.

But the agency, which is obligated to respond to such a FOIA request in a timely manner, has been dragging its feet. This has caused U.S. Right to Know, together with the Public Citizen Litigation Group, to sue for access to the documents. The delay in responding has led to speculation that the agency is intentionally dragging their feet on this particular issue.

“I file a lot of FOIAs [with the] EPA; I consider them, typically, to be pretty good,” Carey Gillam, research director of U.S. Right to Know, told WhoWhatWhy. “Better than the other federal agencies in terms of timeliness and responsiveness. They don’t redact things nearly as heavily as the FDA generally. But on this response, trying to get these documents [about glyphosate], they have been very reticent to respond.”

Gillam said that the EPA’s standards for responding to FOIA’s in general have been eroding over the last couple of years. Overall, the Obama administration had a checkered record on complying with such requests.

In this case, however, the subject matter itself could be at the root of the delay.

“I think there have been so many red flags raised over the years, even from the 1980’s,” she said, “and when we try to get information out of the EPA about it, it’s very difficult to do so. And it’s become more difficult over the last year or two since [this issue] became really controversial [and the court cases began].”

Gilliam is referring to an archived report from 1985 where the EPA classified glyphosate as a class C carcinogen, indicating a lack of studies in humans and animals to confirm the links with cancer. This finding was reversed in 1991. Herbicides are routinely investigated by the EPA in 15-year rotations. The latest reregistration investigation into glyphosate resulted in the 2015 report that prompted the FOIA.

Because Monsanto’s Roundup is so widely used, the carcinogenicity of glyphosate is of crucial importance. The debate has heated up since the World Health Organization (WHO) in 2015 labeled the chemical a probable human carcinogen.

It appears, however, that EPA’s experts reached a different conclusion.

An internal memorandum titled “GLYPHOSATE: Report of the Cancer Assessment Review Committee (CARC)” was posted on the agency’s website on April 29, 2016, along with a separate report on atrazine, another investigated herbicide. That report concluded that glyphosate was “not likely to be carcinogenic to humans,” but it vanished from the EPA website days later.

Last week, the European Chemicals Agency also concluded that glyphosate should not be classified as a carcinogen.

While the EPA report was available online, Monsanto had copied the document and referenced it in a lawsuit filed by workers in the agricultural sector who claim that Roundup gave them cancer.

Coincidentally or not, Jess Rowland, the chair of CARC and an EPA deputy division director, resigned shortly after.

On May 12, 2016, less than two weeks after the document was withdrawn, U.S. Right to Know submitted a FOIA request to access the EPA’s records “referring or relating to the CARC report on glyphosate” from January 1, 2015. It also requested access to its records of communication between Monsanto and the EPA “that discuss or relate to glyphosate.”

Under FOIA, the agency had 20 days to comply with the request. According to the lawsuit, the EPA stated in a May 26, 2016, letter “that it had initiated a search for responsive records that ‘could take up to 2-3 weeks to complete.’” However, when the lawsuit was submitted earlier this month, it had been over 205 days since the request and the EPA had neither submitted any documents nor made a determination on the request.

Gillam noted that the delay could simply be part of a troubling trend.

“Freedom of Information has been a real problem in the United States of late,” she told WhoWhatWhy. “This certainly isn’t an isolated incident by any means — the US federal agencies have been failing to comply with FOIA, repeatedly, for several years. In the last few years, particularly.”

The EPA received over 10,000 FOIA requests in the last fiscal year. Granted requests took on average 163 days and up to 2011 days to process. By comparison, the average processing time for granting requests in 2012 was 44 days, with the maximum of 851 days.

The agency has not responded to a request for comment.

Because of the ongoing litigation, which was triggered by the 2015 IARC report, it would appear that the delay is helping Monsanto.

Earlier this month, presiding Judge Vince Chhabria of the San Francisco federal court unsealed files from both Monsanto and the EPA.

Monsanto refutes the New York Times story on this new information, claiming that the article had “cherry picked data,” made “misleading claims,” and “overlooked the benefits of GMOs for farmers in the developing world.”

“The allegation that glyphosate can cause cancer in humans is inconsistent with decades of comprehensive safety review by the leading regulatory authorities around the world,” Daphne Dorsey, a Monsanto spokesperson, told WhoWhatWhy.

For now, the activists are still willing to give the EPA the benefit of the doubt.

“Maybe they’re just overwhelmed but maybe there’s something else there,” Gillam said. “But legally, they are required to make this information public and to be responsive to the Freedom of Information Act and they haven’t been so we’re trying to hold them responsible.”