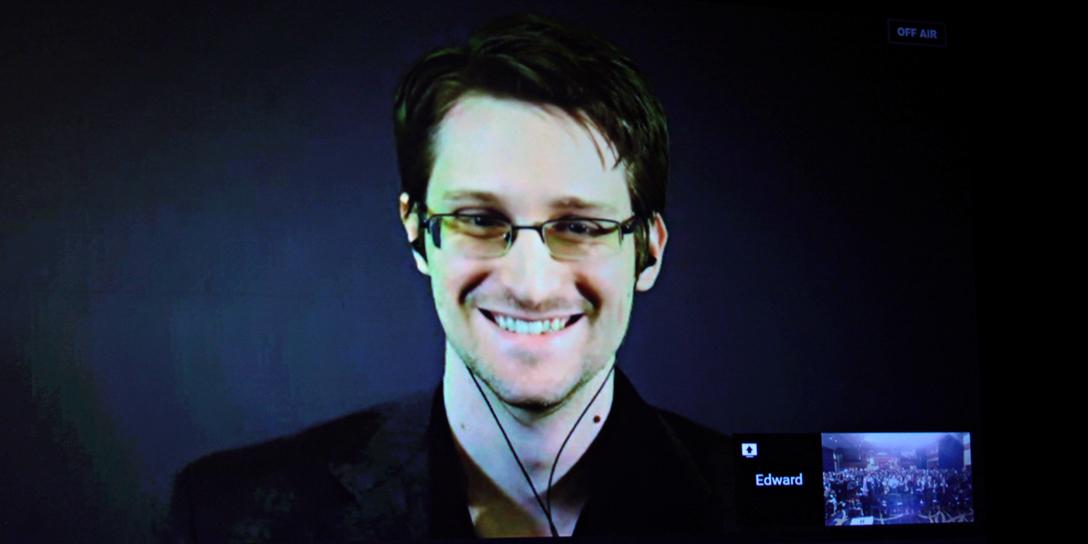 Edward Snowden is likely the world’s most famous whistleblower. Will the passage of the USA Freedom Act vindicate him from being known by many as a traitor? Photo credit: Gage Skidmore / Flickr
Government Integrity Rights & Liberties

Edward Snowden: Vindicated by the USA Freedom Act? Or Marked For Death?

But in an interview with WhoWhatWhy, the former Carter Administration official recalled how that same word could have just as easily described his initial reaction to Edward Snowden’s whistleblowing revelations in 2013.

“I felt like Snowden was giving away the family jewels,” says Carter, his conversation a mix of old southern colloquialism, Yogi Berra-isms and sobering intellectualism.

And even today, Carter worries that the anger and fear generated by Snowden could doom the former NSA contractor to some nefarious “unforeseen event,” like a helicopter crash.

“We’re at the point in which we have elements of our security state who believe they must go way beyond the laws,” Carter says. “Killing what they consider to be a hard-core traitor would not be a big deal for them.”

The only thing clear about Edward Snowden is that America’s perception of him is still very much unclear. And it might be that way for a long time.

A Changing View of Snowden

Two years after Snowden’s bombshell, Carter’s own journey is complete with his co-authorship of a new book fiercely defending Snowden, After Snowden: Privacy, Secrecy, and Security in the Information Age.

Carter says he was initially torn between two allegiances—his time as an Assistant Secretary of State, protecting national security secrets, and his years as an investigative journalist.

Eventually, the deep-digging reporter in him sided with Snowden.

Carter doesn’t consider all leaks the same. He draws a clear distinction between Chelsea Manning’s torrential release of surveillance secrets through WikiLeaks, and the measured publication of Snowden’s secrets by journalists Glenn Greenwald and Laura Poitras. He calls the massive release of Manning’s secret files—with no attempt to provide context—“like dumping flopping fish all over the floor.”

By contrast, he says, instead of leaking raw files, Snowden’s camp vetted and curated the information first. “[They] took their long path to publication in order not to pull a Manning dump.” And it’s Snowden’s information that ultimately inspired revisions to the Patriot Act, which last month morphed into the USA Freedom Act, and dumped the government’s direct collection of bulk phone data.

While Carter doesn’t think much of the revisions—“like chopping a little piece of blubber off a whale”—he thinks Snowden deserves the credit. Some doubt he’ll ever get it.

“I don’t believe Americans are reconsidering about Edward Snowden, as a person,” says Tim McNulty, a Northwestern University lecturer, who specializes in media and security issues.

McNulty thinks it won’t be forgotten that Snowden broke the law, a “traitor” label that, for many, will always stick. And although Glenn Greenwald has said Russia was only meant to be an intermediary stop for Snowden, the fact that Snowden is still there “clouds” any thinking that he is a real patriot.

“You don’t know what else he has taken and who else he has shared it with,” said McNulty.

McNulty recalls Vietnam protestors who went to jail, and Daniel Ellsberg, who stayed in the US, to face trial for publicly releasing the Pentagon papers on military action in Vietnam. “If [Snowden] said, ”I’m going to take my lumps in court and defend my actions,’ I think that would get him a lot more respect.”

McNulty calls Snowden a “’canary in the mine [who] served an excellent purpose for Americans.” But he says Americans still question how any ordinary contractor in any government department could download secrets, a recipe for “anarchy.”

The Washington Post used the report to brand Snowden a “liar” and possibly a “foreign agent.” Hodding Carter says if the report is true, “it’s a bad thing,” but he questions the veracity of it. And Glenn Greenwald blasted the report, calling it an anonymous-driven fabrication, comparing it to “smears” perpetrated against Manning and Ellsberg.

Ultimately, Snowden might never get a definitive place in history. “Only in mythology do you have perfect heroes,” says McNulty, “and perfect villains.”

And some people would be perfectly happy not to talk about him. Snowden seemed more like the elephant in the room when Congress passed the USA Freedom Act; President Obama praised the Act’s surveillance revisions, but did not mention the contractor who put them into motion. White House spokesman Josh Earnest repeated that Snowden needed to return home to face the “very serious crimes” he’s accused of. And Representative Peter King (R-NY) offered a confusing Tweet that called the passage of the Freedom Act a “defeat for ISIS, Edward Snowden & Rand Paul.” King did not respond to a request for clarification by WhoWhatWhy.

Others Also Side with Snowden Now

On the topic of Snowden specifically, Hodding Carter isn’t the only one to switch sides: Several months after Snowden’s revelations, Washington Post columnist Richard Cohen, an early critic, wrote: “As time has proved, my judgements were just plain wrong. Whatever Snowden is, he is curiously modest and bent over backward to ensure the information he had divulged has done as little damage as possible.”

Fox News’ Juan Williams appears to have changed his tune as well. In 2013, he said Snowden “puts himself above everybody in our democracy.”

But last month, Williams wrote in The Hill: “Say what you will about him, but it is now clear that his actions forced Congress to take responsibility.” As for whether the Obama administration and House Republicans could now embrace Snowden and allow him to come home, Williams wrote: “Now is the time for a serious conversation [about it] that made no political sense just a few weeks ago.”

For Carter, those about-faces “just shocked me,” because he feels Williams and Cohen “swim in the stream” of establishment Washington, where forgiving Snowden is hardly a popular position.

But Carter thinks the government will never give Snowden credit for inspiring changes, however small, in NSA surveillance; doing so would give future would-be whistleblowers the “green light” to do the same, and that’s unacceptable for the government.

“My [writing] partner thinks there’s a way to make it all ok, where (Snowden) gets a slap on the wrist, a few months [incarceration] or a commuted sentence, or some damn thing. I don’t believe there’s a prayer for that.”

And as for that ominous gut feeling about the mortal danger Snowden faces from “elements of our security state?”

“I don’t say you gotta pray for him. But that’s what I’m saying.”