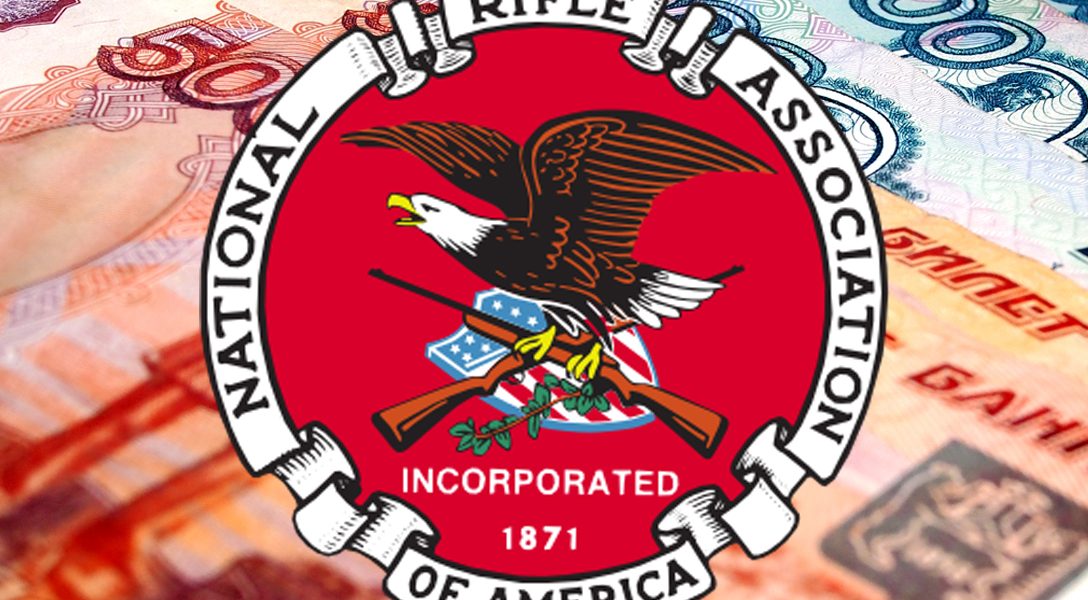 Did the NRA Launder Russian Money to Help Trump Win the 2016 Presidential Election?

Why would Russian money intended to influence a US election be “laundered” through the NRA?

Because foreign contributions to US elections — expressly forbidden by federal law — could be hidden from US oversight under a provision of the tax code that exempts “social welfare” organizations, like the NRA, from revealing their donors.

Just last week, McClatchy reported on a recently surfaced 2015 photograph showing that several prominent Russians tied to President Vladimir Putin and the Russian Orthodox Church (ROC) were in contact with the NRA during the 2016 presidential campaign.

Russia and the NRA both may have seen value in supporting candidate Trump. Trump was signaling his receptivity to Putin, and the gun lobby was leery of Clinton’s position on guns.

During the campaign, conservative media outlets and Republican elected officials claimed that Hillary Clinton was intent on abolishing the Second Amendment. When the NRA endorsed Trump in May 2016, its executive director Wayne LaPierre declared “The Clinton White House would be a dangerous extension of the Obama White House.”

The gun lobby delivered for its preferred candidate. According to its own figures, the NRA spent more than $30 million in support of Trump — triple the amount it spent on behalf of Mitt Romney’s 2012 presidential campaign. In fact, the NRA claimed in its official magazine to be “the key” to a Trump victory.

It now appears that the NRA’s cash included more than a few Russian rubles.

There is little doubt that Russia actively sought to turn the 2016 election to its advantage. Russian hackers tied to Putin’s government launched a cyberwarfare attack against the US when they filched emails from the Democratic National Committee and conducted a social media campaign to discredit then-candidate Hillary Clinton. But did the Putin regime also help Trump with Russian “dark money”?

Recently revealed documents prove that Russians remained in contact with Trump’s associates throughout the presidential campaign, and played an active role in helping Trump get elected.

It has long been reported that Trump, members of his family, and figures from his presidential campaign have business ties with Russians associated with organized crime. Since the collapse of the Soviet Union, many observers have concluded that Russia has regressed into a virtual “mafia state.” Less well known, however,  is the connection between some of the same oligarchs who have thrived under Putin and the Russian Orthodox Church (ROC).

Thus far, three prominent members of Putin’s circle are known to have met with NRA officials:

Dmitry Rogozin: In May, Rogozin was appointed as the director general of Russia’s state-run aerospace company Roscosmos, after serving as deputy prime minister of Russia’s defense industry. Prior to that, Rogozin served as Russia’s ambassador to NATO, preventing Ukraine and Georgia from seeking western alliances. As Putin’s right-hand man, Rogozin leads the ultra-right party Rodina (Motherland) and advocates for the restoration of the Russian Empire (a plan in which Russia reclaims Alaska). Despite being levied with sanctions in March 2014 for his role in the annexation of Crimea, Rogozin met with NRA representatives two months before the 2016 election.

Sergei Rudov: Rudov is head of one of Russia’s largest Christian Orthodox philanthropies, the St. Basil the Great Charitable Foundation. The foundation was launched by ultra-nationalist Russian oligarch and businessman, Konstantin Malofeev. Malofeev accumulated substantial personal wealth as founder of the private equity firm Marshall Capital Partners, and made much of his money as an investor in the state-controlled telecom group Rostelecom. Malofeev launched the Orthodox Christian network, Tsargrad, in 2011 with a former producer of Sean Hannity’s Fox News program named Jack Hanick. In 2012, Hanick and his family moved to Russia and converted to the Orthodox faith to help establish the network as Russia’s Fox News. Tsargrad is an arm of propaganda, instrumental in sponsoring terrorists and illegal armed groups in Russia’s attacks against Ukraine, and airing conspiratorial videos, including those of Alex Jones. Malofeev was been sanctioned since 2014. He is currently under investigation for the crash of Malaysian Airlines flight MH17.

Alexander Torshin: Deputy governor of the Central Bank of the Russian Federation, Torshin is a lifetime voting member of the NRA, and has attempted to infiltrate the American gun lobby for the past decade. Torshin has met four NRA presidents and attended five NRA conventions in the US, including one at which he sat at a table with Donald Trump Jr. in 2016. In April, reports confirmed Torshin was one of 23 Russians who had donated to the NRA since 2015. Torshin’s role in the annexation of Crimea landed him on the US sanctions list in 2014.

Torshin is a mafia godfather, according to Spanish authorities, laundering money for Moscow’s infamous Taganskaya organized crime group through Spanish banks and real estate deals. Taganskaya is recognized by the US and the EU information and intelligence services (including Europol and the FBI) as an organization whose activities include the appropriation of companies using violent or fraudulent methods, bank scams, extortion, and the carrying out of contract killings.

Torshin was scheduled to meet with Trump and Vice President Mike Pence in Washington in early February 2017 at a well-attended prayer breakfast meeting. The meeting was abruptly canceled, according to sources from the White House, in light of the mounting criticism related to the influence of certain Russians in President Trump’s circle. Torshin and his protégé, Maria Butina, started a Russian gun rights group called Right to Bear Arms in 2011, and have since opened 75 offices in Russia. In July 2015, Butina attended the annual FreedomFest in Phoenix, AZ, where then-candidate Trump was a speaker. Butina asked Trump whether he would lift sanctions against Russia. After making several derogatory comments about Obama’s weakness on immigration policy and the Iran nuclear deal, Trump told Butina, “I believe I’d get along very well with Putin … I don’t think you’d need the sanctions. I think that we would get along very, very well.”

During testimony before the House Intelligence Committee, Glenn Simpson, co-founder of the investigative firm Fusion GPS, named Torshin in describing what he said were efforts by Russians to “infiltrate” the NRA. “I would say broadly speaking, it appears that the Russian operation was designed to infiltrate conservative organizations,” Simpson told investigators. “And they targeted various conservative organizations, religious and otherwise, and they seem to have made a very concerted effort to get in with the NRA.”

The Justice Department’s probe into the NRA’s ties to Russia intensified after reports revealed a May 2016 email to Rick Dearborn, Donald Trump’s 2016 campaign adviser, bearing the subject line “Kremlin Connection.” In it, Paul Erickson, an NRA member and conservative activist, said he wanted the advice of Dearborn and then-Alabama Senator and Trump campaign official Jeff Sessions, about how to proceed in connecting Trump and Putin. Erickson wrote, “Putin is deadly serious about building a good relationship with Mr. Trump. He wants to extend an invitation to Mr. Trump to visit him in the Kremlin before the election. Let’s talk through what has transpired and Senator Sessions’s advice on how to proceed.”

José Grinda, Spain’s top prosecutor investigating Russian mafia crimes, recently visited Washington, DC, and met with the FBI Organized Crime Unit. Grinda says both the Organized Crime Unit of the FBI in the US and the office of the FBI in Spain “are interested in some investigations in Spain” and “they said that those would be sent to Mueller.” Grinda, who handed over wiretaps to the FBI, was recently asked if he was concerned about Torshin’s interactions with Trump Jr. or other American political figures. Grinda replied, “Mr. Trump’s son should be concerned.”

This is off-topic but considering the looking back on the Watergate era is big now.
Please Russ Baker explain to me the proof you have that claims Nixon didn’t do the Watergate break-in. I like your claim but were is the actual documentation. The checks from the Texas CREEP committee the “plumbers” had in their pockets? Actually has Papa Bush’s signature? Or what?

NRA was a big-time client of private security outfit Beckett Brown International. Check out “There’s Something About Mary: Unmasking a Gun Lobby Mole” by Mother Jones…