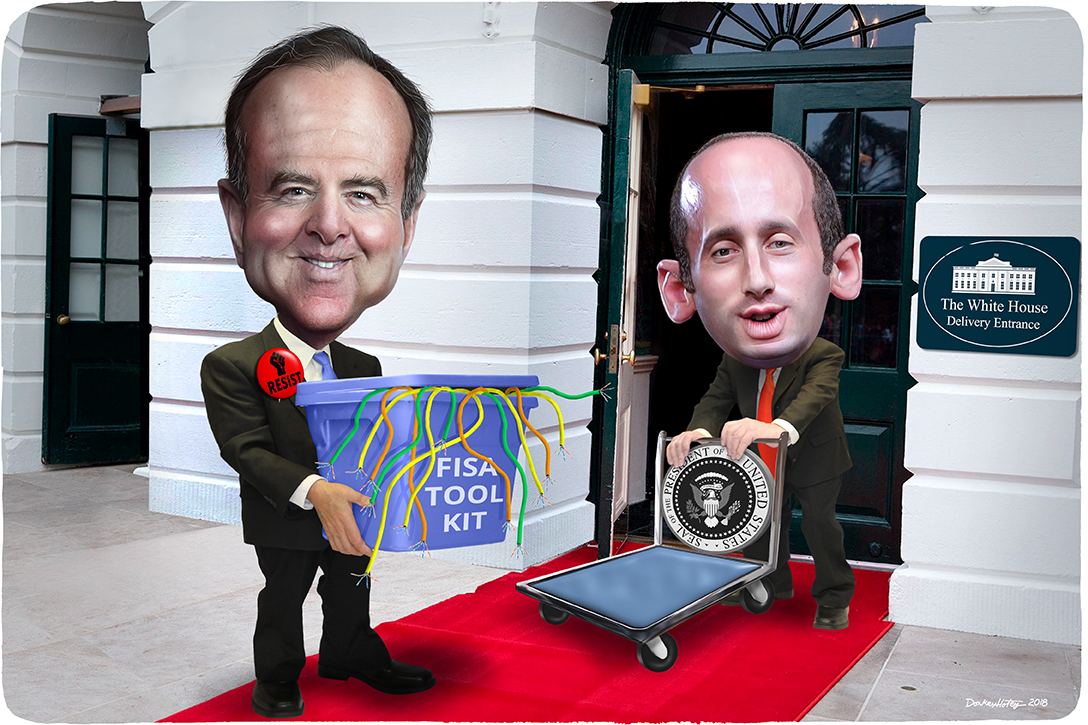 Where Is Democratic Resistance to Trump Spying and Military Expansion?

The Democrats’ message is clear: President Donald Trump is unqualified to be commander in chief. He’s a threat to democracy and is destabilizing the international order. He supports Russia in ways that defy any normal explanation. He’s unlike any US president we’ve seen before. These feelings are reflected in movements like “the Resistance.”

But if Trump is so threatening, why do Democrats keep voting to give him more power? We really shouldn’t be surprised, because we’ve seen this movie before.

Tuesday night’s State of the Union address confirmed what everyone already knew — Trump is brash, demagogic and, while playing to his base, also tends to exasperate some Republicans who would prefer the message be delivered with a warm smile and caring visage.

What’s also true is the agenda he laid out is nothing you haven’t heard before. Expanded military budget, low taxes. Bad hombres, axis of evil. Guantanamo. This is the GOP vision in vivid colors. Democrats had plenty of cause to stay seated.

But in politics things aren’t always what they seem. Especially in an environment where campaign finance is ruled by corporate and donor-class cash. Democrats have stood strong against Republican plans — such as the recently passed tax bill and continued efforts to repeal Obamacare. But they have been complicit in a number of recent votes handing Trump even more executive power.

On January 18, Congress voted to renew section 702 of the Foreign Intelligence Surveillance Act (FISA) — a provision that privacy advocates have long warned is a dangerous state overreach and violation of the 4th amendment. The law allows for the potential surveillance of American citizens’ communications — phone calls, emails, texts, social media — by intelligence agencies without a judge’s warrant.

Although there was bipartisan support to amend the bill with additional privacy safeguards — witness the joint efforts of Sens. Rand Paul (R-KY) and Ron Wyden (D-OR), and Reps. Justin Amash (R-MI) and Zoe Lofgren (D-CA) — those amendments were defeated, and renewal was passed with the support of Democratic leaders like Californians Adam Schiff and Nancy Pelosi in the House, and Chuck Schumer (NY) and Dianne Feinstein (CA) in the Senate.

On November 16, the Senate passed a $700 billion military expansion bill — almost $40 billion more than what Trump had asked for. The vote was 89-8. Soon the Trump administration will ask for $716 billion for 2019, reflecting stated concerns to counter “the undermining of the international order” by China and Russia. It’s worth pointing out that the US military budget is more than that of the next eight countries combined.

Given Trump’s over-the-top rhetoric on North Korea and Iran, rumblings of a preemptive-strike doctrine, widespread concern over his finger on an upgraded nuclear button, increased efforts to “win” in Afghanistan (by farming it out to private contractors like Erik Prince), and an increasingly ramped-up and shadowy drone war, why aren’t Democrats putting up more of a fight?

They are rightly concerned about Trump’s open attacks on the press, his labeling any coverage he dislikes as “fake news.” But why then would they vote to give Trump authority to listen in on phone and email communications of American citizens — including journalists and whistleblowers?

But let’s not forget that during the last administration journalists were also under attack. The Espionage Act of 1917 was used a record number of times to go after reporters’ sources.

When Edward Snowden leaked the revelations of a worldwide US surveillance dragnet in 2013, he was asked why he didn’t leak the information before Obama was in office. He had this to say:

Obama’s campaign promises and election gave me faith that he would lead us toward fixing the problems he outlined in his quest for votes. Many Americans felt similarly. Unfortunately, shortly after assuming power, he closed the door on investigating systemic violations of law, deepened and expanded several abusive programs, and refused to spend the political capital to end the kind of human rights violations like we see in Guantanamo, where men still sit without charge.

What we are witnessing now is what’s been evident for many decades: that no matter which party is in power, the military-intelligence-industrial complex just keeps on truckin’.