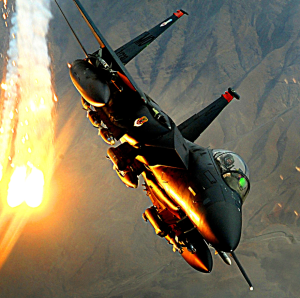 CONTEXT: Iraq—Just the Tip of the Spear Bombs Away Again in Iraq

The U.S. is bombing Iraq for the first time in three years, this time to slow the advance of the Islamic State of Iraq and Syria (ISIS).

If it seems like too little, too late, that’s because the well-financed al-Qaeda faction is moving swiftly across Iraq. It’s been two months since ISIS delivered a shock by taking over the northern city of Mosul, smack in the heart of Iraqi oil country.

Along the way, they’ve been embarrassing the Iraqi military that the U.S. government funded, trained and armed. Meanwhile, the Iraqi government ostensibly controlling the army is obviously not up to the task of managing the country, despite billions in U.S. support.

That’s no surprise, really. Nor is the fact that the White House is wrapping the current operations in a humanitarian cloth. President Obama said he decided to call in air strikes to protect American personnel still on the ground, three years after the formal withdrawal of troops, and to “avert a massacre” of a Christian minority ISIS threatened to slaughter if they didn’t convert to Islam. The specter of another Benghazi attack also figured in the decision-making.

What really appears to have spurred the White House into action is the advance of ISIS on Erbil, a longtime safe haven in northern Kurdistan. It happens to house a U.S joint operations center. There, a handful of U.S. military personnel coordinate with the local peshmerga fighters that have kept Kurdistan and its oil fields safe since the start of the Second Gulf War. Kurdistan has always been the favorite child of Iraq’s regions. It’s relatively well-governed and, more importantly, harbors the biggest chunk of Iraq’s oil and gas reserves. The capture of the Mosul dam by ISIS—which could be used to flood cities as far away as Baghdad and knock out electricity at the same time—also seems to have prompted the U.S. into action.

The airstrikes are, of course, a tactical show of force to remind ISIS who’s got the air power to blow them into smithereens, and discourage further advances. In Pentagon/White House thinking, air strikes are casual sex versus the long-term commitment a boots-on-the-ground campaign requires.

Naturally, humanitarian reasons are always a good story to obscure or direct attention away from the real motivations behind military action. Remember Operation Restore Hope in Somalia in 1993? Set up under the U.N.’s rubric as a mission to help Somali famine victims, it became a U.S.-led military operation to flush out disparate militias blocking food aid. Even George H.W. Bush visited the country, despite the risks.

However, the United States had strategic and commercial interests in Somalia including contracts to explore potentially enormous oil deposits. Even Dole moved in with the blessing of the U.S. ambassador to grow bananas. That sparked a latter-day Banana War after the militias hired by Dole’s local representative clashed with those of an established Italian competitor.

So it bears remembering, as the U.S. sticks the tip of the spear back into Iraq, what kind of interests were being protected when the Second Gulf War began in 2003. Do oilfields in northern Iraq sound familiar?

The mainstream propaganda broadcasting aparatus is also selling the idea that this recent intervention was executed to prevent a genocide of christians by militant islamists. I this an attempt to confuse people as to who is committing genocide in the area right now?

Are you trying to say the Islamists aren’t massacring Christians or killing children or executing former Iraqi soldiers or putting heads on spikes… but rather the US is committing genocide by dropping a few ineffectual bombs too late to save an awful lot of people?

u do know the neocons wanted to ramp up military support for their friends ISIS just months ago… don’t u?

why not send McCain in there on foot (alone) for another photo op… or maybe they could all sing a little “bomb bomb bomb bomb, bomb bomb Iran” together…

So, the US is funding the Iraqis and their BFFs, Saudi & Qatar, are funding ISIS… hmmmmm!

Isn’t it interesting that just before Isis “came out of nowhere” (western media & government comments), the US was looking for a way to get al-Maliki out of office. Now it seems ISIS mission is almost accomplished (al-Maliki is done)… just a few more weeks while the US presstitutes work on the sheeple to get them on board for more war… clearly the Generals are getting bored, and worried some psycho might start suggesting “insane” military budget cuts!

Well I guess it’s an improvement on that planes into buildings thing… lol!

I found this article left one card face down on the table. While all these events revolve around petro energies and who controls them, and just as important who does not, the writer here, a Mr Hull, failed to reveal that ISIS is a CIA creation and that U.S. “Interests”, read the west’s rich and powerful wish to balkanize the middle east into smaller sectarian states; with serious unease with one another. These being much easier to control and with larger profit outcomes, let alone helping the little ally on the coast a great deal.

The question was asked, early on, why with all our spying capabilities that can supposedly see a pimple on a gnat’s ass, we never noticed that convoy of Toyotas barreling along into Iraq, full of “terrorists” on their way to Baghdad – or as far into the country as they could get before we decided, “Ok, that’s far enough. Americans will buy it now, especially if we keep harping on ‘Christians in danger’ and ‘humanitarian aid’.” Of course, news coming out yesterday is that the Christians are not in as much danger as we thought, nor are there as many as we thought, but might as well fire up the jets anyway to protect what really needs protecting – the oil fields, as usual. I say, let’s stop this insanity right now. If the oil companies need their stuff defended, let them hire some private company with their own money to do it for them. I’m sure Blackwater/Greystone, whatever their calling themselves now, would be happy to oblige.