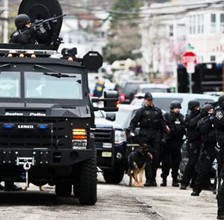 On May 18, 2015, President Obama made a surprising announcement: he ordered the federal government to reverse its standing practice of providing American police departments with surplus weapons and vehicles from the battlefields of Afghanistan and Iraq. Given declining confidence in police after a seemingly constant recent stream of fatalities involving black suspects, this newfound caution with heavy provisioning is understandable. But questions about the wisdom of militarizing police are not new. WhoWhatWhy first wrote about the issue in February, 2014. You can read about it here.

If you’re a small town or perhaps a university security department, the US Department of Defense has got a deal for you!

Thanks to the ending of the Iraq War, and the winding down of the war in Afghanistan, the Pentagon has 11,000 heavily armored vehicles that it has no use for.  Called MRAPs—Mine-Resistant Ambush Protected—they are designed to protect against AK-47s, rocket-propelled grenades and IEDs. And as pitchman Paul Richards used to say of the ’69 Pontiac Firebird, “They’re practically giving them away!”

Correction, they are giving them away. All a local police department has to do to get itself an 18-ton MRAP—which originally cost taxpayers between $400,000-$700,000 complete with gun turret and bullet-proof windows—is send a few cops to pick it up and pay for the gas.

There are a few downsides: the things get only five miles to the gallon, can’t go over most bridges, or under them, and have a nasty habit of tipping over on rough terrain.

For departments that find them too unwieldy, the Homeland Security Department is also offering grants to communities so they can buy smaller Lenco BearCats, lighter armored military-style vehicles that run about $280,000.

Since last summer, police departments across the country have taken possession of 165 DOD surplus MRAPs, and there are another 731 requests for the 14-foot-high vehicles. Even Ohio State University police got their hands on one, saying it would provide a “police presence” at football games.  Most of the rest of the vehicles to date have gone to smaller community police forces—everywhere from Farmington, NM (pop. 45,000) to Hamburg Village, NY (pop. 9,500).

The number of BearCats purchased with Homeland Security grants isn’t readily available, but they were on conspicuous display in and around Boston last year during the metro-area-wide martial law lockdown while police and National Guard searched for Dzhokhar Tsarnaev, the wounded and unarmed 19-year-old suspect in the Boston Marathon bombing.

For the most part, Americans don’t seem to question the use of military vehicles by their local police, but some communities are starting to object. In Concord, New Hampshire, for instance, 1500 residents last fall signed a petition opposing their town’s use of a $258,000 federal Homeland Security grant to purchase a BearCat for the local police department.

The Concord Monitor reported that most of those opposing the purchase said they feared further militarization of their local police. Despite the opposition, the town government went ahead with the acquisition anyway.

The proposed legislation is now in committee. If it’s passed and signed into law by the governor, state and municipal agencies in New Hampshire will be barred from buying or even accepting free offers of “military style equipment” for police use, except with the approval of the assembled citizenry at a public town meeting.

That prohibition would include not just MRAPS and BearCats, but also things like fully automatic weapons or anything that is not “available in an open commercial market.” These restrictions would not apply to the National Guard.

Rep. Hoell spoke to us about his bill.

WhoWhatWhy:  Why did you introduce this bill?

Rep. Hoell:  I introduced the bill because the citizens of Concord were overwhelmingly opposed to their police department having MRAP vehicles and it was ordered anyway. I don’t see any reason for police to have armored vehicles, or even fully automatic weapons.

WhoWhatWhy: Why are you opposed to police having military equipment?

Rep. Hoell:  The role of the state is to make sure the citizens have the best law enforcement and not one that’s overly militarized. Whatever happened to police wearing blue? Now they are dressed in black, head to toe, and when they go to serve warrants at people’s homes, they break the door down, and they wear masks.

WhoWhatWhy:  Why the masks?

Rep. Hoell: I don’t know, maybe it’s a military thing. But it is not community policing.

WhoWhatWhy: What kind of support are you getting for this bill?

Hoell: I’m getting support from citizens of the state across the political spectrum.

WhoWhatWhy:  Why do you think police in this country are becoming increasingly militarized?

Rep. Hoell:  I can’t speculate about why this is happening, but I know that the citizens don’t want it. It needs to stop.

This story originally appeared on WhoWhatWhy.org on February 17, 2014.