According to one of his sons, before his death in 1982, former CIA asset and anti-Castro Cuban Ricardo “Monkey” Morales said he trained Lee Harvey Oswald at a CIA camp. And he was a bad shot. Tall tales or a clue? Maybe the unreleased archives have an answer! Photo credit: FBI
Government Integrity Hidden Power

Claim: JFK Assassin Oswald Was CIA-Trained — And Bad at Shooting

What’s hidden in the government records related to the John F. Kennedy assassination that President Joe Biden (and Donald Trump before him) promised to release — in Biden’s case as recently as last month — and then didn’t?

Only the CIA, FBI, and archivists know, and only they can say for certain, what knowledge survived the 1960s and 1970s and what vital clues ended up in the shredder. Maybe something is in there that could vet the most recent claim that Lee Harvey Oswald — whom the Warren Commission fingered as the lone shooter and whom the House Select Committee on Assassinations (and almost everyone else alive) believe was probably part of some conspiracy — was a CIA asset who received CIA training before November 22, 1963, and who, according to his purported trainer, was a terrible shot.

Maybe there’s nothing in the archives that could verify that one. Either way, it might be nice to know!

Over the Halloween weekend, the Miami Herald picked up a story, initially dropped via Spanish-language radio, that a notorious anti-Castro Cuban exile and sniper trainer who had verifiably worked with the CIA recognized Oswald as one of his trainees in a secret CIA sniper camp, or so he told his sons decades later.

Additionally —  according to the tale related on Miami-based Actualidad 1040 AM by one of the sons of Ricardo “Monkey” Morales and later repeated to the Herald — Morales and some associates were sent to Dallas on the order of his CIA handler two days before the assassination for an unspecified “clean-up” mission. They were then recalled to Miami after the shooting, without receiving further orders.

Possible? Sure. Plausible? Those records certainly would be handy!

According to 58-year-old Ricardo Morales Jr., about a year before the elder Morales was shot in the back of the head during a December 1982 fracas in a Miami bar — a killing his attorney said was a setup — the ex-spy had become paranoid and fearful about his safety.

Morales was involved with the CIA and numerous anti-Castro, anti-communist operations while working with Venezuelan intelligence, including the bombing of a Cuban airliner. According to the JFK Facts blog, edited by Jefferson Morley, Morales’s heavily redacted CIA personnel file revealed that the agency believed Morales was a “good commando” before he later became an “honest and objective” FBI informant, in the Bureau’s words.

He’d provided evidence to the FBI after his spy career, but by that time, he’d lost his government protection and was worried that he’d revealed too much about his past CIA activities. Morales had also managed to infiltrate what he described as a CIA-run cocaine smuggling operation in Bolivia. And he’d already been the subject of a January 1982 Harper’s Magazine cover story.

So he encouraged his teenage sons to ask him questions while on a trip to the Everglades to practice shooting. His sons asked him who he thought killed Kennedy.

Morales replied it wasn’t Oswald, “because he has witnessed him shooting at a training camp and he said there is no way that guy could shoot that well,” as the younger Morales told the Herald.

Other sources corroborate the theory that Oswald, the former Marine, was no marksman. In 1967, a Cuban intelligence officer related the story that a 16-year-old boy had once outshot Oswald during target practice outside Mexico City.

So: Three shots in six seconds, scoring two hits, including a head shot, at a moving target not less than 250 feet away with a mail-order rifle is a remarkable feat of marksmanship. Experts assembled by the Warren Commission tried to replicate it and couldn’t.  There’s also probably no way anyone firing a shot from behind could cause the president’s head to jerk backward, as if it had been struck from the front.

How does all that work, anyway? Maybe the sealed records have some answer!

Here’s more from Morales, Jr., as per the Herald:

“My brother asked ‘Who killed John F. Kennedy?’ and his answer was, ‘I didn’t do it but I was in Dallas two days before waiting for orders. We were the cleaning crew just in case something bad had to be done.’ After the assassination, they did not have to do anything and returned to Miami,” his son said on the radio show.

“He knew Kennedy was coming to Dallas, so he imagines something is going to happen, but he doesn’t know the plan,” he [Morales Jr.] said. “In these kinds of conspiracies and these big things, nobody knows what the other is doing.”

“When my old man was training in a CIA camp — he did not tell me where — he was helping to train snipers: other Cubans, Latin Americans, and there were a few Americans,” he said. “When he saw the photo of Lee Harvey Oswald [after the assassination] he realized that this was the same character he had seen on the CIA training field. He saw him, he saw the name tag, but he did not know him because he was not famous yet, but later when my father sees him he realizes that he is the same person.”

The pater Morales’s name has been floating around JFK conspiracy theories for years. 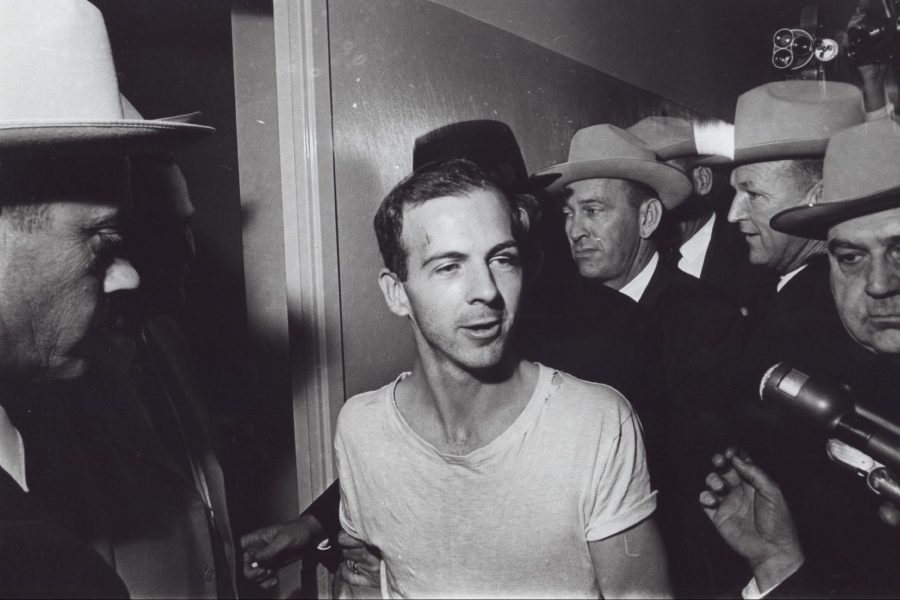 A committed anti-Castro Cuban, Morales was interviewed by the House Select Committee on Assassinations. That same body later concluded Oswald, in all likelihood, did not act alone. It is hard to imagine how he could have. Here’s a guy with a job in the Marine Corps that made him “very attractive Soviet bait,” who very publicly defected to the Soviet Union before, isolated there, he was allowed to return to the United States. This is a man who acts like an intelligence asset, who would have been monitored at every step if he wasn’t.

These are some very bizarre coincidences that might be explained by these secret documents that two presidents said they would release and then didn’t!

The 58th anniversary of JFK’s assassination is in less than three weeks. Fascination with the murder endures. This is in part because it was the first of a string of high-profile killings in the 1960s. And it’s in part because the murder touches major figures in American power, from former CIA Director Allen Dulles — who hated Kennedy, who removed him from office, yet who found himself in a CIA office on the day of the killing) — to later CIA director and future President George H. W. Bush, who was in Dallas on the day before the killing, for some reason!

But fascination mostly endures because it is an enduring mystery that a majority of Americans believe remains unsolved. (Not for nothing did Americans’ faith in their government start to decline in the 1960s, with only brief recoveries after the end of the Cold War and 9/11.) It’s the original postmodern American cipher.

It also endures because, thanks to the ambiguity, everyone has a pet theory they’re peddling. Earlier this year, James Woolsey, who served as CIA chief from 1993 to 1995, published a book in which he claimed Oswald was, in fact, a KGB agent who killed the president on orders from Soviet Premier Nikita Khrushchev.

Who’s telling the truth? The answer — or something leading towards it — might be lurking in a government archive. Also, it might not.

If there is a “deep state” — a theory that sitting on the JFK assassination documents helps keep alive! — it’s highly likely any smoking gun has long since been removed and destroyed. But if Biden let the public poke around the surviving ancient documents and decide for themselves, it sure would help!