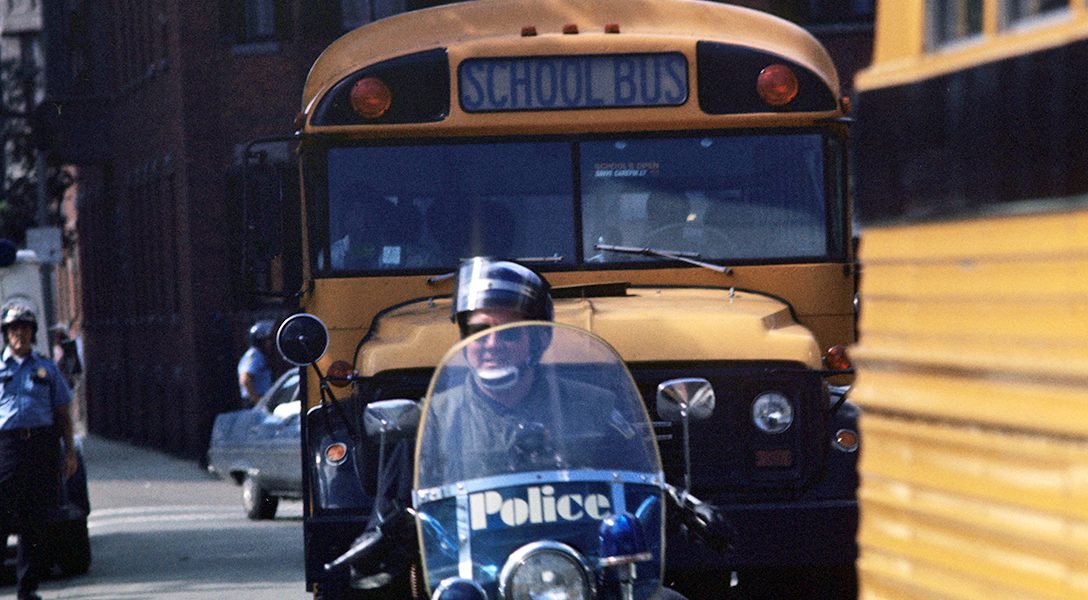 The year is 1974 and the signs hanging from the windows of the south Boston buildings read “N***er Go Home.” In the streets below, crowds of rage-filled white residents scream racist abuse and hurl bricks, as terrified African American pupils cower in their talismanic yellow school buses.

It was the beginning of the era of desegregation busing in the US.

Forty-five years ago, Boston became the crucible of attempts to racially integrate America’s schools. In a sort of epilogue to the civil rights struggles against segregation of the previous decade, the violent white resistance of the Deep South was transferred to “Southie,” an impoverished Irish American neighborhood of  Boston, Massachusetts — a bastion of American liberalism. Nightly TV news bulletins broadcast images of angry mobs of parents and children determined to sabotage the Supreme Court ruling requiring any Boston school with a student enrollment that was more than 50 percent nonwhite to be balanced according to race. Physically moving the children by bus was deemed the solution.

This week marks the 20th anniversary of the decision by the Boston School Committee to drop race as a factor in deciding which school a child attends, but busing remains a powerful symbol of America’s enduring race trauma. Indeed, during the Democratic presidential debate last month California Sen.  Kamala Harris — who was bused as a schoolgirl — made waves when she criticized Joe Biden’s anti-busing history. Meanwhile, the vile epithet “N***er Go Home” was re-energized in recent days when President Donald Trump tweeted that four Democratic congresswomen of color should “go back and help fix the totally broken and crime-infested places from which they came.”

But away from the drama of the headlines and the charged political rhetoric, what of the children of Boston who became the guinea pigs of the busing social experiment?

In June 2014, Brandeis sociology professor David Cunningham, a researcher and nationally recognized expert on civil rights issues, discovered in the Boston City Archive a collection of essays by 6th grade pupils who were bussed. As their city convulsed around them, the pupils of Oliver Wendell Holmes Middle School, a mostly black school in Dorchester, recounted their impressions in the first days of the fall of 1974. The 31 revealing accounts tell a story of fear and racial tension, but refreshingly they are also optimistic coming-of-age narratives that chronicle long-awaited school trips to the zoo, friendships across a community divide, and dreams of the future.

Except where permission to use names has been granted, students are identified as male or female.

…I had Mr. Mulkern for a homeroom teacher; it was a good class and I made new friends. A few days after that we saw movies, then we went home and were stoned. Three months after that we had a Christmas party and movies; later we also went roller skating. Everyone had a fun time. Mr. Mulkern said he didn’t have too much fun…. This month we are going roller skating again and nobody knows if Mr. Mulkern will have fun this time or not. [white]

In some ways busing is good and in some ways bad. It is nice to know that some of the two races can get along. I’m sorry for those who can’t. I think that when they brought up integration, they picked the wrong place. Perhaps South Boston ruined the whole idea. But here at the Holmes, both races get along fine. I’ve hardly seen a fight between a white and a black, and for that matter, hardly a fight at all. Where my little brother goes to school, there is one fight after another. Integration is a good idea except for those who can’t face up to it….

This year is the best year I’ve ever had. Busing is the big issue this year. Mostly in South Boston. South Boston is where the action is. With kids getting stabbed, and large crowds around the school yelling and screaming, police cars being turned over, people being attacked by mobs, buses being rocked by students, then people saying they’re not prejudiced! That’s crazy! But during January, things quieted down.

When I discovered I was going to be bused, I felt anxiety…. Busing is a new ‘weird’ word….

I never gave integration much thought. Some of the kids are nice and some are not. Some of the black kids are good and some are bad. The same is true with the white kids…. There are mostly black kids there but I would rather have been in an evenly balanced school. I think busing is dumb. People should go to any school they wish. It seems like kids are being pushed from one place to another….

Now that it’s the end of the school year I realize I’ve made a lot of friends. [white]

To begin with, I didn’t want to be bused anywhere. I was afraid I would be all alone. Because sometimes it is hard to make friends with strangers. But I found a few friends. I was a little bit happier. Sometimes I’m happy, but most of the time I’m scared I might get into trouble. … I don’t know exactly why, but I did not want to go to this school. I wanted to stay in the fifth grade….

I’m hoping for a happy, peaceful year [next year], and I think I’ll have one in the seventh grade but in high schools like Roxbury, English, Hyde Park, and South Boston, they won’t. [black]

When I heard that I might be bused to another school with a lot of blacks in it, I didn’t want to go. I never spent a whole year with blacks before…. I knew that some blacks were mean and I didn’t want to get hit or anything like that. I thought that there wouldn’t be anyone that I knew there.

My first friendship came when I was sitting in the back row of the class. I think I was working when he started talking to me. Horace was my first friend, until I started talking to another boy named Alfred. Surprisingly enough, both of them were blacks, but as it turned out they were both good friends. I don’t like being bused, but since I made a couple of friends, and I would have to come here anyway, I don’t complain…

I don’t want to go to the Holmes school again because I don’t really like it at all. I don’t like it because it looks cruddy and I think that the Latin School has a better inside than the Holmes. [white]

I was a little scared when I first heard about integration. I was never integrated before. Then, after awhile, I really didn’t think of it as integration. I thought that all the people were alike, and I noticed that we were all kind of nervous. I think that everything is going good now. Things have cooled off a lot. I’m glad they have. [white]

Integration is a good thing and a bad thing. It is good because the blacks and the whites can get to know each other and their ways. It is bad because they think they can’t get along.

This year was the best year of my life. I met lots of new friends both black and white….

I do want to be in an integrated school again. I had the best time of my life this year. [black]

When I heard I was going to an integrated school I felt better because I thought it would be nice to have some white friends because some of the black people thought they were the best in the land….

But this year has been a very rewarding year. We are going on trips, having parties, and as long as we do our work, Mr. Mulkern will take us places. But if we give him a hard time, he will make us work until we learn what we have to learn. I can’t say I blame him….

This school isn’t so bad after all. I think the parents should be blamed for all the fights. After all, if they didn’t make such a fuss about it the kids would not have fought in the first place. [white]

When I heard that there was going to be busing, I was afraid of being bused to some place entirely new. I never could really understand why everyone couldn’t just go to a school in their own neighborhood. I thought it would be the way it was in the old days when the blacks had to sit in the back of the bus. I didn’t have too many thoughts about integration, because I went to an integrated school last year. But I thought there would be a lot of trouble. I think integration turned out better than everyone expected. Now people are wondering why did I keep my child out of school half the year.

I got into a little trouble here and there, but it really didn’t affect my learning. I learned a lot this year, but the most important thing was that you don’t judge people by their outer covering. [black]

(Reprinted with the permission of City of Boston Archives)

Postscript: Busing, in part, spurred a white exodus from the city of Boston. In 1974, 60 percent of school students were white. In 2014, Boston public schools were 40 percent Hispanic, 35 percent black, 13 percent white, 9 percent Asian-American and 2 percent from other races.